The fact: Gliders have ballast tanks that can be filled with water. The addition of ballast increases weight, and this allows the glider to fly at faster airspeeds while maintaining the same glide ratio. This means that if two gliders P1 and P2, being both of the same model, start at some point A, and P2 weights more than P1, they will both end at point B, but P2 will arrive before P1. The movement is rectilinear, and during the flight, each plane is able to maintain constant airspeed and vertical speed, being P2's speed greater than P1's. Angle of attack might be different too. This is a little diagram I made:

To simplify things, let's consider the movement is made inside uniform air, with no density variation with height, and winds are calm. I've read some aviation manuals, and the most frequent explanation provided is that the glider retains the same Lift/Drag (L/D) ratio, but nowhere in the books I've read so far includes the proof. I'm trying with my very limited skills to reach an expression relating speed with weight, but almost always get lost in the process.

This second diagram I made shows the different forces involved. As gliders don't (usually) have an engine, there's no thrust, and the only forces present are Lift (L), Drag (D) and Weight (W). (Sorry, arrow lengths are not proportional to vectors magnitudes): 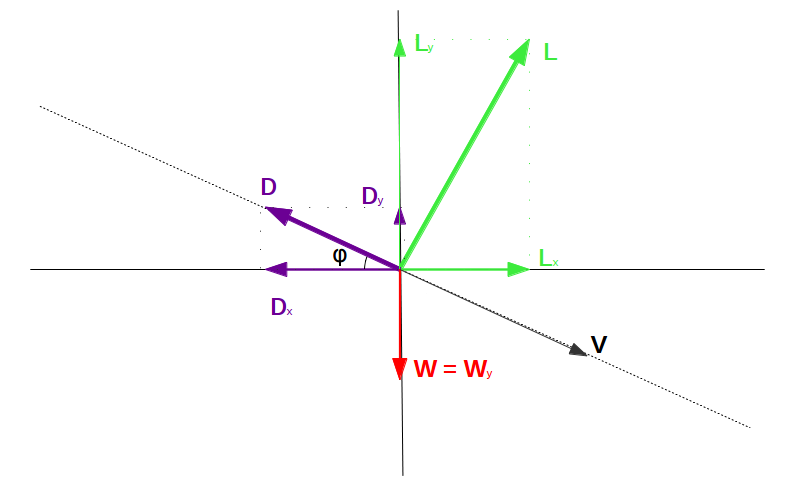 As the movement is uniform, the acceleration is null. Then, Newton's Second law tell us that:

As the mass cannot be null, then the resulting force F should be null. So we have:

The lift formula is:

Again, sorry for not including units. I continued transforming the expressions but couldn't get a clear W/V equation, instead I ended up with a messy trigonometric expression. There might be an easier way, perhaps approximating some coefficients? Anyway, my questions:

(Sorry for my awful English, it is not my native language)

EDIT:
Here's my attempt to express speed as function of the mass:

As lift and drag coefficients are constant for a given angle of attack, ${\rho}$ and q are constants because the air is uniform, and S is constant because the glider flies without modifying the wing area (no flaps added), we can group the constants and this is what we get:

When a glider is trimmed for maximum glide range, for which Lift over Drag (L/D, also called glide ratio) is maximized, it descends at an angle whose tangent is the inverse of that ratio. For example, a Cessna 172 has a glide ratio of about 9 at roughly 65 knots. A good glider can have a glide ratio of 30.

The glide ratio (within reason) is not a function of weight, because lift and drag vary together, proportional to velocity squared.

Velocity itself is a function of weight, because lift has to equal weight. When an aircraft is balanced in a normal way (slightly nose-heavy) it automatically seeks the speed necessary to support its weight.

So adding weight increases velocity, so as to generate the additional lift needed to support the weight. That additional velocity increases the drag by the same proportion.

So, the glider is flying faster, and descending faster (because sink rate is proportional to drag), but since the drag and lift are in the same proportion, the angle of descent is the same.

As an aside, aircraft that are "slippery", or have low drag, are difficult to descend in. You can see the airport just fine, but you can't get to it, because you can't get down. To remedy that, you need a way to either reduce lift (with spoilers) or increase drag (with speed brakes). Some spoilers double as speed brakes. If you find yourself in a commercial airliner approaching an airport, and you see the spoilers on the top of the wing being raised, and you hear a roaring sound, that's what's happening. The pilot is trying to lose altitude without gaining additional speed. Other aircraft do it by "slipping" - that is, using the rudder to put the plane sideways to the wind, increasing drag.

There is an omission in input data: glider's "fuel" is a sum of its potential and kinetic energies. So heavier glider (towed to same height and velocity) requires more work from the towing plane and starts with more energy than lighter glider. 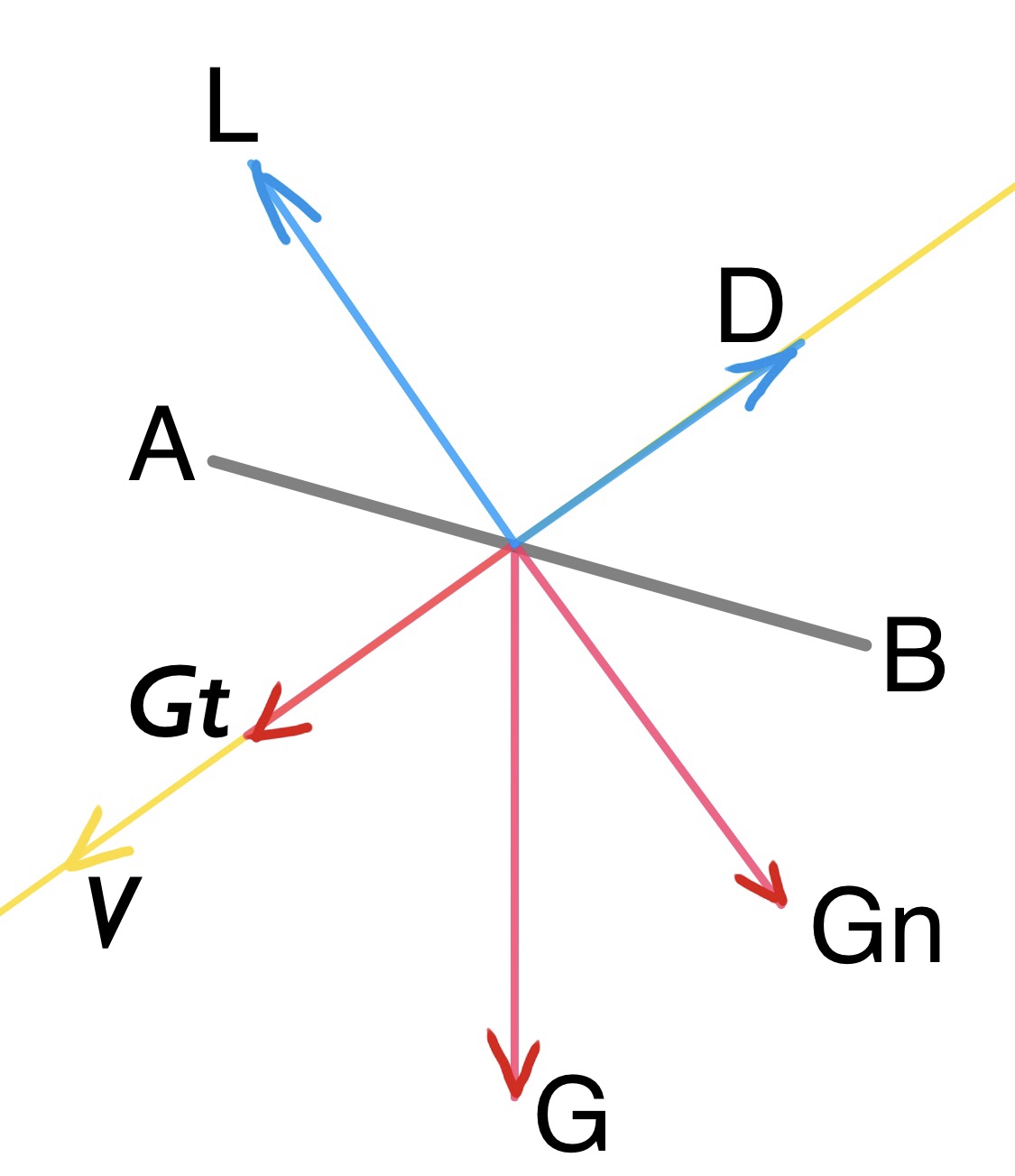 From this analysis of the glider, we can see that the flight of the glider is a thrust flight. Without gravity as the thrust, the glider cannot fly and cannot generate lift.

Increasing the weight $G$ of the glider will get a larger $G_t$, so the glider can fly further. 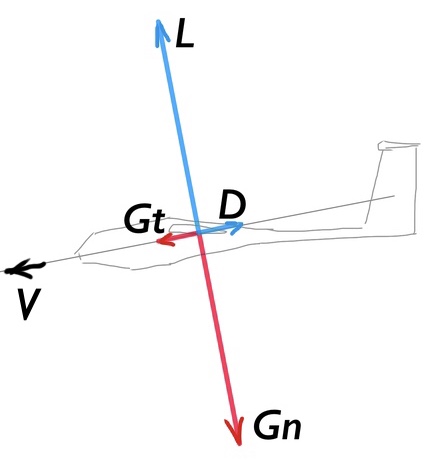 Not the answer you're looking for? Browse other questions tagged newtonian-mechanics aerodynamics aircraft or ask your own question.

1
How to calculate the actual drag force on a wing?
4
Understanding equation for force acting on stones skipping over water
0
Parametrization of wing lift and drag in 3D
0
Angle of attack and lift: is there a model?
7
Why do all fighter jets and aerobatic airplanes have flat wings?