There is such a thing, called "stability bound" on mass of the Higgs boson. The basic idea (as I understand it) is that we take Higgs self-coupling, and calculate its renormalization running. And it turns out that for certain initial conditions, it becomes negative at some higher scales. So the Higgs potential becomes unstable.

The initial value for running self-coupling is uniquely determined by the Higgs mass in the Standard Model (SM). And for the $m_h=125\,GeV$, we are actually in the "meta-stable" region. Meaning that the coupling, indeed, becomes negative, but the tunneling time through the "potential barrier" is larger than the lifetime of the Universe. Here is the plot from a recent review on the topic, http://arxiv.org/abs/1112.3022: 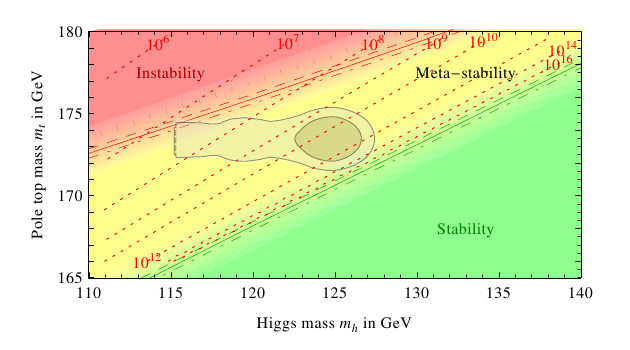 Red dashed lines denote scales at which self-coupling become negative. How can sense be made of the whole construction?

Is there a basic logically consistent and logically thorough description of all that "stability" argument?

First: Whether the metastable region is acceptable is somewhat debatable. I think that most experts would say No. Even if the tunneling may be very slow, one would have to explain why the Universe started in a configuration whose energy is very far from the minimum, in a metastable valley.

There are other papers that already put the observed mass to the strictly unstable realm, too.

But there's another question here:

This question contains some incorrect assumption/information. In reality, we – more precisely Nature – doesn't start at low scales. Nature always starts at the high scales. That's where the fundamental laws of Nature have their well-defined form. And we may derive the effective laws valid at low energies or long distances. We end up with low scales; we don't start with them!

If you're thinking that you're "starting" with a low-scale theory, you're really solving an inverse problem: you're looking for a theory valid up to higher scales or all scales – a more universally usable, more fundamental theory – which happens to reduce to a given low-energy effective theory. The fact that you may derive an inconsistent (or no) high-energy theory simply means that your inverse problem has no solution. The low-energy effective theory may look consistent but it's just an artifact of the approximations. When one looks properly, it is inconsistent. The extrapolation to higher energies is a systematic way to see this fact.

I accidentally wrote about the stability argument yesterday here:

Not the answer you're looking for? Browse other questions tagged quantum-field-theory vacuum higgs or ask your own question.

11
Could spontaneous symmetry breaking happen again in our universe?
6
Why $\lambda\phi^4$ theory, where $\lambda>0$, is not bounded from below?
4
Higgs stability in Standard Model