Does a camera have single slit interference?

Because a camera has an aperture, I would think that there is single slit interference?

Does a camera have mechanisms to account for that?

The resolution ("sharpness") you get with a camera depends on a number of factors (roughly in order of importance ... although that's a subjective ordering as any of these can mess up your image:

Obviously, if you don't focus your object properly, the image will be fuzzy. Now it turns out that as you lens becomes smaller (meaning a larger f number, that is ratio of focal length / diameter), focusing is less important. This is because the blurring effect of being out of focus is basically a convolution of the size of the aperture with the image - scaled by the amount of defocusing. Best explained with a diagram: 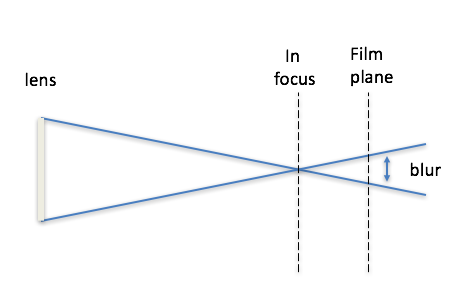 You can learn two things from this: when your film (sensor) is in the wrong place, the light is not focused into a point; and the size of the "blob" depends on the angle subtended by the lens at the film. When you take a picture of objects at different distances, each wants to project to a different plane. When your lens aperture is small, the "blobs" this creates will be small; we say you get good "depth of focus". When the lens is bigger, the blobs are bigger, and only the thing that is "exactly" focused will look good.

Most of the time, that is the thing that determines how sharp your image is.

However, it's possible for the other factors I enumerated to be important. In the case of diffraction (your question), the diffraction pattern of a circular aperture (usually a reasonable assumption) is an Airy disk, and the width of the disk is approximately

Where $f$ is the focal length, $d$ the diameter of the lens, and $\lambda$ the wavelength.

Now there is a very nice article describing the effect of pixel size on a range of imaging issues at this link. It includes a nice table of the size of the diffraction "blob" for different colors, as a function of f number:

The pixel size of a Canon 1D Mark II is 8.2 um - so when you are shooting with a lens with an f number greater than 5.6, diffraction (rather than pixel size) starts to limit your performance. Note that cameras with smaller sensors tend to have smaller pixels (your iPhone 5 phone might have approximately 1.5 micron pixels). That tells you that the sensor has reached the diffraction limit - getting more megapixels won't help in this form factor because you can't make the f number smaller or the focal length longer (and the sensor bigger). However, with the diffraction spot spanning 10 or more pixels, you can start to do some image processing (deconvolution filtering) to make the image sharper. As you can see from the table, you actually need to "deblur" the different wavelengths (R, G, B components of the image) with a different sized kernel if you want to optimize the result.

I was not able to determine whether this is done. The camera on your iPhone has an f number of 2.2 - so diffraction is not too important.

You will find some related discussion here. Also, the "starburst" effect that is asked about in this question is a diffraction effect - although in this case, it's the fact that the aperture consists of blades with straight edges that causes the particular effect. It demonstrates unequivocally that diffraction does happen - but in that instance, the geometry favors just a few directions which gives an effect over a much larger distance (when the light source is so bright, and the pattern is along select directions only, you can see the Nth diffraction peak, basically).

The second point I made, "quality of the lens", is something that we often forget about these days, because most lenses are so good. But not the lens in the human eye. I have severe astigmatism - basically, the lens in my eye is a little bit cylindrical, meaning that there is no single distance at which a point focuses into a point - instead, it will be an elongated blob. When there is a lot of light, and my pupil constricts, things are a lot more in focus - because when less of the "imperfect" lens is used, the effect is smaller. I can simulate this by partially closing my eye - covering a "particularly bad" part of the lens, I end up seeing better... Diffraction really comes into play when these other things are no longer the limiting factor.

Here are a series of photographs which were produce by the same camera and lens arrangement but with a different size of the entrance pupil (aperture of the use-d part of the lens slowly). 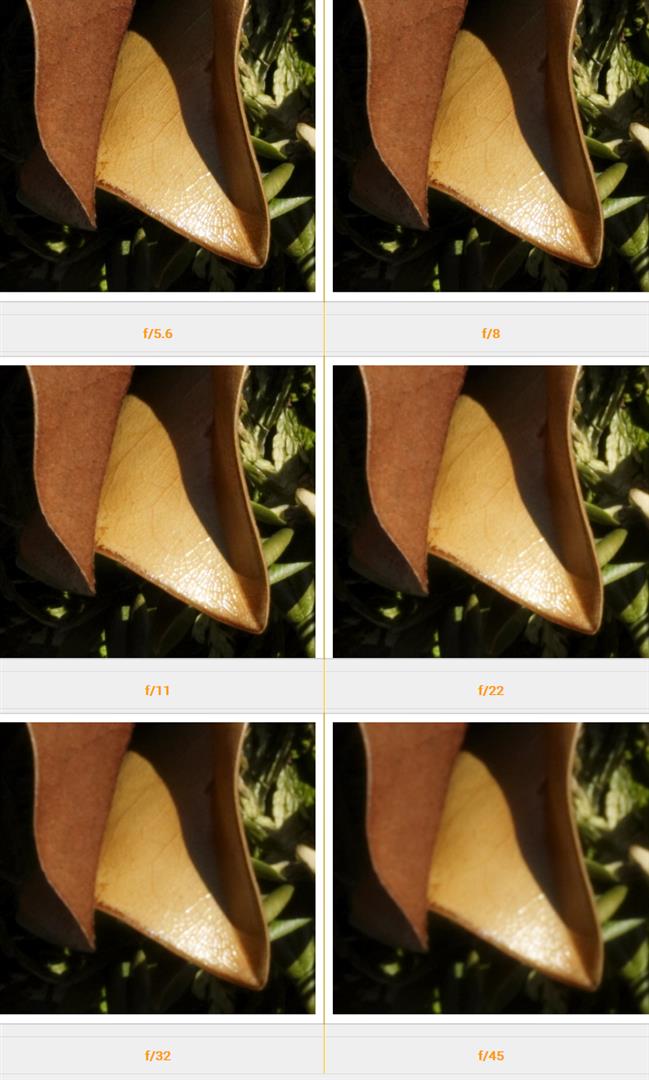 The parameter $\rm f/N$ has $N$ being called the f-number.
$N = \frac f D$ where $f$ is the focal length of the lens (fixed in this case) and $D$ the diameter of the entrance pupil (decreasing as $N$ increases).

Even with the problem of showing the images on a pixilated computer screen you should see the effect of diffraction.
As the f-numbers gets bigger, the smaller entrance pupil produced larger diffraction patterns leading to the image not looking as sharp.

Now on some cameras you might not see the effect as clearly because the image is formed on a detector which is made of many discrete areas called pixels.
If the size of the blurring due to diffraction is smaller than the pixel size then it will be the pixel size which will result in a lack of sharpness of the image.

it might be that a photographer might reduce the size of the entrance pupil to produce a better picture as a whole. 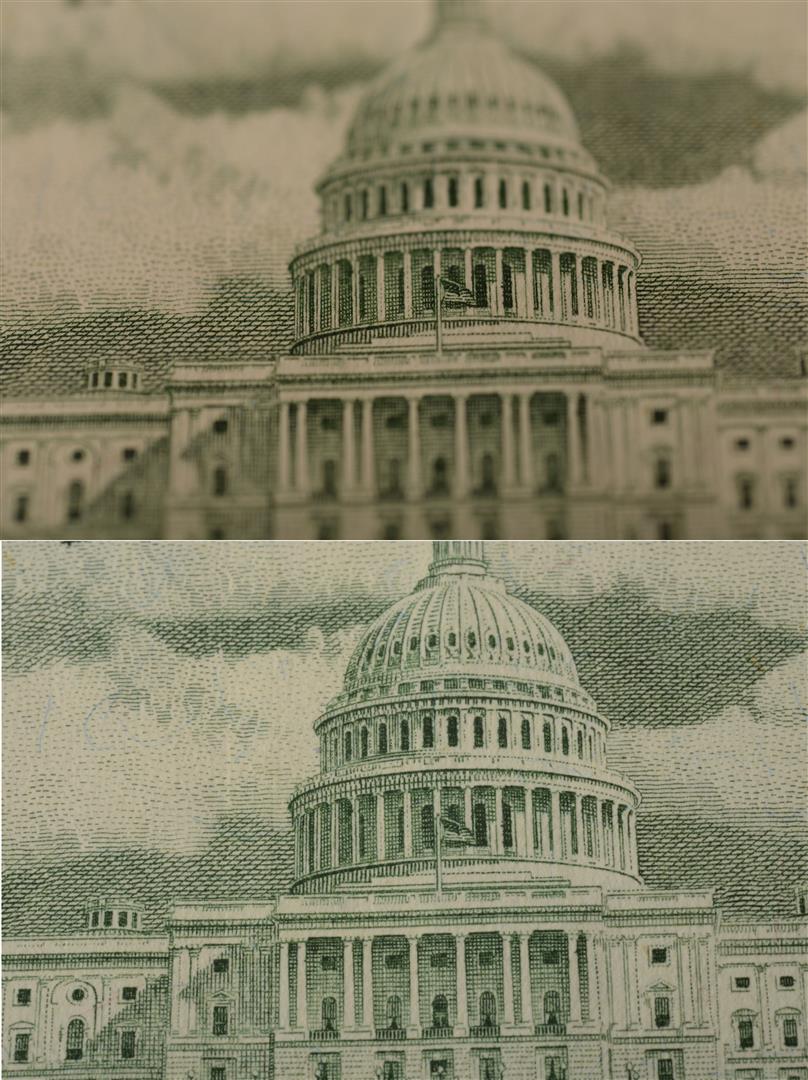 The improvement shown in the lower picture is due to a number of factors.
One possible factor is that when one reduces the entrance pupil only rays near to the principal axis are refracted by the lens and so reducing the effects due to the defects (aberrations) of the lens.
An example of this effect is squinting or looking at a distant object through the hole between two touching fingers which can improve your vision if you are short sighted.

Another thing which is improved when the entrance pupil is decreased is the depth of field - the range of distance from the lens of objects which produce a reasonably sharp image.
Notice how the top image is blurred at the periphery even though the effect of diffraction is less than for the bottom picture.

Yes, but it isn't the only problem. It might look like this. (See this Wikipedia article on Fresnel diffraction.) This appears to be for a pinhole rather than a large camera aperture. And in this example, the center is a dark spot, rather than a bright spot. For a camera, the central spot would be pronounced and the rings small and faint, like your graph. 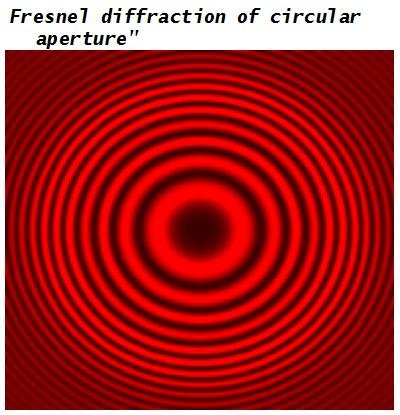 If you take a picture of a point source, ideally the photo should show a point. In reality, it will show a spot. There are a number of reasons for this, one of which is diffraction. Diffraction is "single slit" interference where the slit is in this case a round hole.

But the interference is combined with imperfections in the lens. These are called aberrations. One is spherical aberration. It is the result of making a lens out of a spherical surfaces (much cheaper) rather than the ideal shape. The difference in shape is typically tiny, but enough to make a small spot.

Another is chromatic aberration. The index of refraction of glass is not constant for all wavelengths. So red light may focus at a different distance than blue light.

There are others. The way to compensate for them is to use multiple lenses, and make the aberrations of one compensate for another. A difficult trick for a camera that must work may have to zoom as well as all the other problems. If you do a good job, the aberrations are so small that diffraction is the biggest problem left. In this case, the lens is diffraction limited, and very expensive.

If you are interested in more, google Fraunhofer diffration, Fresnel diffraction, Airy disk, and lens design.

The principle is actually called an Airy disk named after Sir George Biddell Airy, a famous astronomer in the 1800s. It is well studied and important in photography and imaging.

Please note: the smaller the diameter the worse the resolution but the depth of field is improved. A larger aperture provides less diffraction and a better image but a loss of depth of field.

Not the answer you're looking for? Browse other questions tagged optics visible-light diffraction camera or ask your own question.