Consider a car turning through a turn on a level road. The car follows front wheel Ackerman mechanism. Let 1 tire turn through theta1 and the other by theta2, with a speed v.

I seek to determine the relationship between the speed v of the car, turning radius R, front turning angles theta1 and theta2, and some other parameters such as wheelbase, and car width (if they come along in the relationship).

I've been trying the above problem for quite some time now but to no avail. I am unable to figure out how to get the speed of the car into the relations. Here was my try ( if you consider it one) : 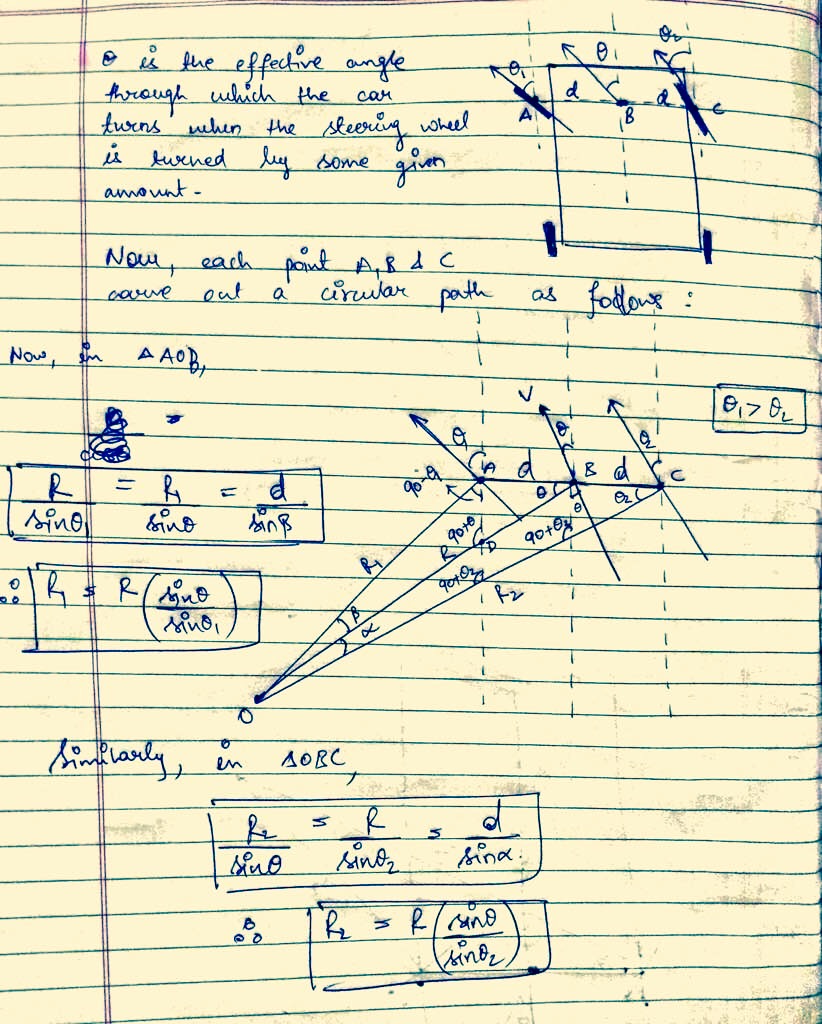 Any help appreciated. I really want to find this relationship derived, now that I've been working on it for a while.

I think the only time the speed of the car should matter is if it is going so fast that it skids. Otherwise, static friction between the road and the tires will be maintained, which means it will follow the same path regardless of speed.

The front tires will only turn on one axis (per tire). As such, the only way the car can move without skidding is for the tire to move in exactly the direction it is pointed, regardless of speed.

The angle of each of the front tires is carefully calculated so that all four tires are tangent to a circle about the same center point at all times. From that information, you can calculate the turn radius of the car with geometry. Which appears to be the approach you've taken.

2
Angular and linear displacement of a turning car
2
Vehicle Driving off Cliff (Thelma and Louise movie)
0
Why is it easier to steer a car at speed?
0
Lateral Tire Forces for Turning a Car
0
Uniform circular motion & relative velocity
3
How do car wheels use friction to accelerate?
1
Max turning velocity for a car as a function of centre of mass and axle width
2
The dynamics of a cornering wheel
0
What force stops a car?