Is the Moon in a “Freefall” Around the Earth? [duplicate]

The force of gravity keeps our Moon in orbit around Earth. Is it correct to say that the Moon is in “free fall” around Earth? Why or why not?

The moon is free-falling towards the earth but fortunately, the rate at which it falls to the earth is nearly equal to the rate at which the earth curves. In this answer, I will derive the formula for orbital velocity at the surface using pure geometry and later smartly generalize it. This will clearly establish the fact that the object is falling towards the earth but the earth is curving away sufficiently that the object does not hit the surface. 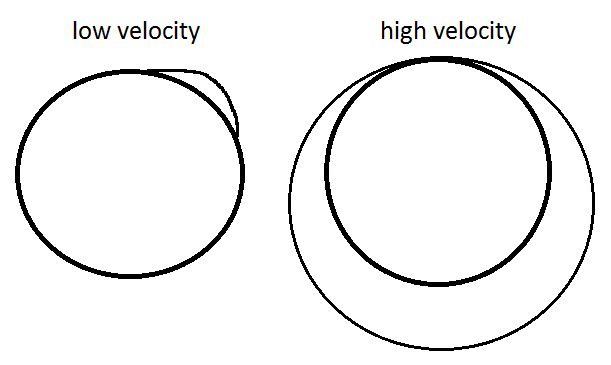 In the second case, the ball travels sufficient distance horizontally that by the time it drops vertically, the earth's surface would've curved enough that it won't hit the surface of the earth. There is no magic with centripetal acceleration, it is simple geometry.

For the sake of simplicity, let us consider throwing a ball off the surface of the earth as shown in the diagram instead of considering a moon orbiting the earth. However, note that, the surface can be any circle around the earth. We will use this idea to generalize the formula later. 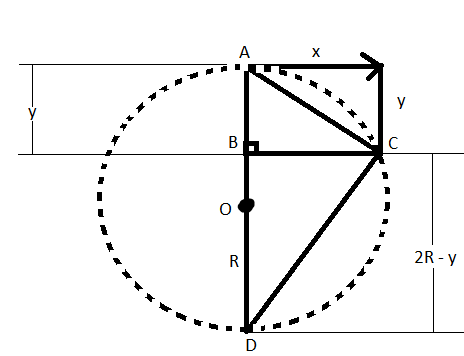 In the above figure, a ball was thrown at a velocity $v$ from the surface horizontally. The ball travels distance $x$ in the horizontal direction and falls a distance $y$ in the vertical direction in one second (why one second? we can treat $x$ and $y$ as components of the velocity of the ball). On the surface of the earth, the ball would fall 5m in the first second.

Some quick observations before we begin:

I could have made use of calculus to derive but it isn't really needed as it would unnecessarily complicate the answer. $$2R - y \approx 2R$$

To be honest, in the limit where $y$ tends to zero, this is not an approximation.

Solving for $x$ in terms of the other variables, you get,

We had considered $y$ as the distance the object would travel in one second. We can write the same quantity in terms of $g$ on the surface.

We had earlier assumed that $x$ is the distance traveled by the ball in one second. Therefore, $x$ is the horizontal velocity.

If you have studied gravitation, you'd immediately notice that the above formula gives the orbital velocity of objects orbiting the earth near the surface.

Smartly generalizing the above result

I had avoided deriving a formula for a general case where the object is a distance $r$ from the surface of the earth to avoid lengthening the answer. However, the above formula can be generalized easily.

can be generalized to

The above formula gives the orbital velocity for an orbit at a distance $r$ from the center of the earth.

The moon is falling towards but "missing" Earth. Had it no sideways motion, it would certainly just fall straight down and crash. So yes, you can say that.

Essentially you are right, but your wording is slightly off. There is one force only, gravity which pulls the moon in the direction of earth. Obviously if the moon was not moving it would be pulled to earth, just as you are pulled to the ground by gravity.

Imagine you are throwing a ball horizontally. You can split the motion of the ball in two parts. If you only look at the vertical component the ball is in free fall (just as if you dropped it). On the other hand, the horizontal component of the ball's motion is not affected by gravity. Now at some point the ball will hit ground. But if you keep increasing the initial velocity with which you throw the ball, at some point there will not be any ground (because earth is not flat), so the ball will still be in free fall towards earth, but the horizontal component of the velocity (which is constant) will prevent it from hitting ground.

That's the situation with the moon. It is freely falling towards earth, while its speed along the orbit does not change in magnitude and prevents it from hitting earth.

There are several scenario possible for the two-body motion in a gravitational field. Roughly speaking, depending on the velocity/enery of the ball/moon, you go from (1) falling back to earth via (2) orbiting earth in elliptic or circular orbit (this is the situation for the planets around sun and for the moon around earth) via (3) parabolic path (almost the case for the Hale-Bopp comet) to a (4) hyperbolic path (some comets). In "3" and "4" the "ball" is not in a closed orbit.

Yes. The statement is not only "true", it is a tautology: All objects which are not interacting with other objects except through gravity are in "free fall"; that is the definition.

(Long-term nitpick: The moon is interacting with the solar wind and other interplanetary/interstellar matter as well as with radiation, so that strictly spoken it is not in free fall but constantly braking. These interactions are negligible in practical terms because the forces are minuscule compared to the mass of the moon. Additionally, the earth is accelerating the moon by means of earth's rotation; that effect is small but actually measurable. Conceivably the sun exerts similar effects on both earth and moon. But then nothing is strictly in free fall, so the term would be only conceptual.)

Yes, it is in free fall towards the Earth and that is what allowed Newton to unify the terrestrial and the celestial mechanics, one of the greatest advances on Science ever. He did that by assuming that both the Moon and a falling apple (allegedly) falls toward Earths due to a gravitational force. Using his newly discovered law of universal gravitation he calculated the forces between Earth and Moon and Earth and the apple. The ratio between the accelerations obtained is $$\frac{a_m}{a_a}=\frac{a_m}{g}=\left(\frac{R}{d}\right)^2,$$ where $a_m$ and $a_a$ are the accelerations of the Moon and apple, $R$ is the Earth's radius and $d$ is the Earth-Moon distance.

The acceleration $a_m$ was obtained by the centripetal acceleration of a circular orbit, $$a_m=\omega^2d=\frac{4\pi^2}{T}d,$$ whre $T$ is the period of the orbit. The Earth-Moon distance as well as the Earth's radius was known at Newton's time so he was able to verify that the two expressions above agree and that was a confirmation of his theory.

But why does the Moon not strike the Earth? Instead of a kinematic approach one can use a dynamic approach to answer this. The Moon's angular momentum (with respect to the Earth) is non-vanishing and due to the fact that the force is central, it has to be constant in time. In order to hit the Earth, the Moon's angular momentum has to go to zero, but this is not possible unless there are another force (besides the Earth's pulling) causing a non zero torque on the satellite.

Earth's moon, Luna, is free falling. More particularly, it is in orbit around the sun, Sol, and is perturbed in its orbit by a nearby planet, Earth.

It seems more appropriate to refer to Luna as orbiting Sol, than Earth. Earth is the less important influence.

Not the answer you're looking for? Browse other questions tagged newtonian-mechanics newtonian-gravity earth free-fall moon or ask your own question.

75
Why doesn't the Moon fall onto the Earth?
0
Why small planets are not attracted by larger planets due to gravitational force?
-2
Free fall around Earth
0
Centripetal force and constant speed

15
Is Feynman's explanation of how the moon stays in orbit wrong?
4
Is the Moon freely falling towards the Earth?
5
Why does the moon stay with the Earth?
0
Why the Moon does not change its orbit from Earth to an another planet?
1
What happens to the water on the surface of the Earth if the Earth is not rotating about its axis in the Earth-Moon system?