Will heating a laser beam affect it?

I conducted an experiment today. I heated a laser beam by shining it through a piece of 1/2 inch copper pipe about 10 inches long. I then heated the pipe until most of it was glowing red. The beam exited the pipe and traveled to a solar cell where I measured its voltage. The voltage and the beam's image were not affected by the heated pipe. There were similar readings for both hot and room temperature. My question is has anyone tried this with more heat and with different results? I know light can heat things, but can light be heated. The purpose of the experiment was simply to gain greater understanding as to the nature of light. 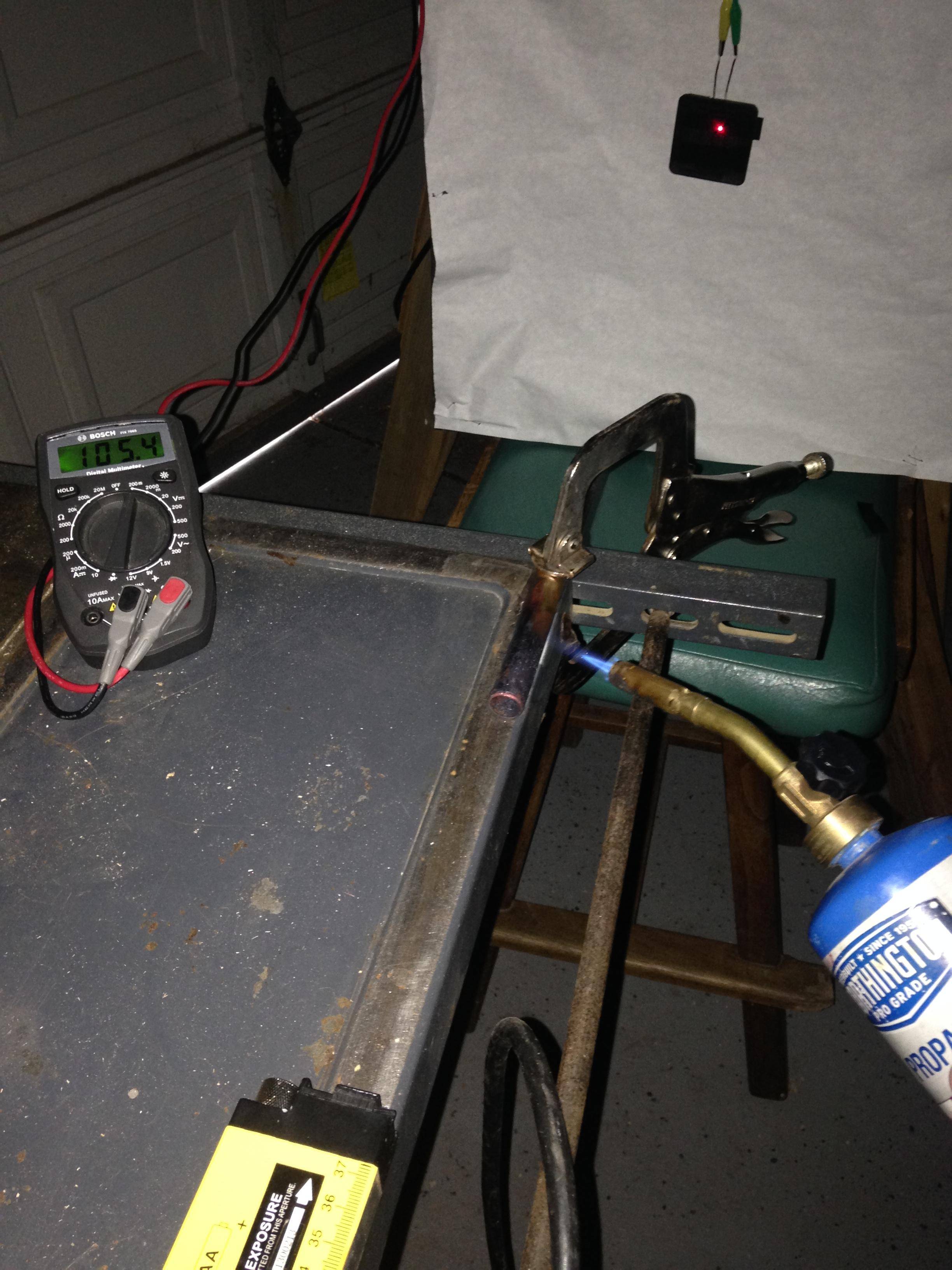 In principle, the scattering of photons off the gas molecules of the flame can carry away heat in some circumstances (this is for example used in laser cooling). If the transition frequencies of the atoms is close to the laser frequency, photons can carry away momentum.

But your laser is such an open system that any scattering of photons off the hot gas molecules of the flame probably just dissipates the heat in all directions. It makes no sense then, to talk about an ensemble of photons with a temperature. If you were to collect some photons, say by shining them into a high-finesse cavity constructed from mirrors, it could perhaps be possible.

The notion of temperature can be applied to a photon gas, but I believe that laser is a very cool system even at very high energy density.

The pictured experiment is naive, but in a clever way.

I presume the idea is that you warm the beam but putting it near a hot thing (the heated tube), yes? That certainly works with material objects, after all.

It works for material bodies because of radiative transfer, but light is characterized by linear superposition which means that it passes through other light without either beam incurring a lasting effect from the encounter.1

So you're not heating the beam that way.

As noted in the comments there will be some interaction with the hot atmosphere inside the tube, but given the scale of the experiment pictured it will be modest.

1 Light can exhibit non-linear interaction is some fairly special materials, or in many more materials at high intensity, and even without a material medium at very high energy or extreme intensities, but none of those condition obtain here.

Not the answer you're looking for? Browse other questions tagged thermodynamics visible-light electromagnetic-radiation experimental-physics home-experiment or ask your own question.

40
Why does laser light not affect glowing materials?
6
Light Polarizer and the Second Law of Thermodynamics
4
Why does a laser beam stay collimated?
2
Top hat laser beam
4
Did diffraction bend this light more than 90 degrees?
3
Why is my measured LED activation voltage lower than theoretical?
0
Laser beam versus activly cooled armor. Who will win?
0
Does diffraction of a coherent laser beam affect its polarization state?
0
Laser beam segmentation