If someone is playing music in a room, outside the room you generally hear a more pronounced reduction in high frequencies, compared to low.

I know that sound is most easily absorbed by a material when the absorbing material is $\frac{wavelength}{4}$ distance from a boundary.

Could anyone explain, in terms of boundary conditions (perhaps?) why a low frequency may be more likely to reflect from and travel through a material, than a high frequency?

Actually, the correct answer involves the concept of acoustic impedance ($Z$), the idea that different media (materials) vary in their deformation due to acoustic pressure forces.

Acoustic waves move matter, so the material form of the system is very important when discussing impedance (or any acoustical topic, really.) So is the orientation of the object with respect to the pressure wave. Both affect the way acoustic energy travels.

This can make the actual analytical determination of frequency dependance quite complex. 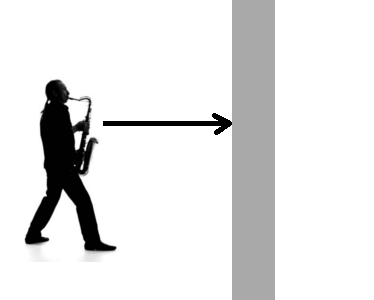 And you're standing on the right-hand side.

In the following section I'm framing the idea in the same way Matthew Schwartz does here, in §5 "Complex impedance" . The document contains more complete derivations, too.

The total acoustic impedance is given as the sum of a resistance term, a mass term and a stiffness term:

Generally (i.e., not specific to the form of the wall), we can write an equation for acoustic impedance in terms of frequency, $f$:

We see that for high-frequency components of the incident wave the mass of the wall ($m$) causes higher values of impedance at these frequencies. The same is true for stiffness ($\kappa$).

What's important is actually the difference in $m$ and $\kappa$ between the two media. We can write an acoustic transmission coefficient as a function of $f$ as well:

In this example, concrete is much more massive ($+ \Delta m$) and stiff ($+ \Delta \kappa$) than air and so it lets less high frequency energy through due to both factors. However, you can imagine a situation where two adjacent media have opposing changes in each property, for example ice and water. Ice is less massive (dense) than water ($- \Delta m$), but also much stiffer ($+ \Delta \kappa$). In such a case we might expect a central frequency to be the most effectively transmitted.

Not the answer you're looking for? Browse other questions tagged classical-mechanics waves acoustics boundary-conditions or ask your own question.

71
Do low frequency sounds really carry longer distances?
10
Why do you only hear the bass when someone nearby is wearing earphones?
3
Why is it hard to feel sound pressure from higher frequencies?
1
wall thickness and acoustic impedance
0
How to calculate effective sound impedance

71
Do low frequency sounds really carry longer distances?
1
How does underwater sound sound?
1
Does the Inverse Square Law apply for all frequencies of sound?
2
How to detect "noisiness" of sound wave?
1
Why isolation increases with lower frequency in stiffness region?
0
How do you find the cutoff frequency of a wall of a particular depth?
78
Why can we distinguish different pitches in a chord but not different hues of light?
2
Why do higher frequencies tend to have a smaller amplitude than low frequencies?