Why there can not be a monochromatic pulse? My physics professor told us that we can't generate a monochromatic light pulse and I was wondering what are the physical limitations causing this.

The fundamental reason for this is that a truly monochromatic waveform $$ f(t) = f_0e^{-i\omega t} $$ is active for all real times $t$ ─ it doesn't start, and it doesn't stop ─, and this means that you need an infinite time to produce one, and you need an infinite time to detect it. Since the energy density of the wave is constant, the infinite duration also means that you require infinite energy to set this up.

Putting feet to the ground, and supposing that the signals start off in sync, the question ultimately asks how well you can distinguish between $e^{i\omega_0T}$ and $$ e^{i\omega T} = e^{i\omega_0T} e^{i\delta\omega \,T}, $$ where the wave has advanced by a phase $\delta\omega\,T$ over the observation window. Now, here's the problem: what happens if $\delta\omega$ is much smaller than $2\pi/T$? In this case, the two waves at $\omega=\omega_0$ and $\omega=\omega_0+\delta\omega$ will have hardly drifted out of step even over your long observation window, and you will find it hard to distinguish between the two.

It's also worth talking about what happens at the edges of the observation window, as well as the production of the wave. Does your wave have a sharp cutoff, going from a finite amplitude to zero instantly? Then at the boundary it is hardly monochromatic. Instead, you might want it to go smoothly from flat to zero over some transition period $\Delta T$, but then that transition period, during which the amplitude is changing, is going to make it harder for you to distinguish between two waves that are only a small fraction of a radian apart in phase.

So, what does this mean? It tells you that a true monochromatic pulse is impossible to realize in real life, because by "true monochromatic pulse" what we mean is the mathematically idealized model that's been on since forever and will remain turned on until eternity. What you can make is waves that are closer to monochromatic than your experiment can resolve, in which case you can just use the monochromatic approximation without worrying ─ but that doesn't make the wave truly monochromatic.

Finally, it's also important to note that the fact that monochromatic waves are unphysical does not make them less useful. Normally, when we consider monochromatic waves, we are considering the dynamics of some oscillatory quantity $u(t)$ which responds to a linear system. In this case, it is often overwhelmingly simpler to view $u(t)$ as a superposition of plane waves $e^{-i\omega t}$ with some weight $\tilde u(\omega)$, i.e. to deconstruct $u(t)$ as its Fourier transform: $$ u(t) = \int_{-\infty}^\infty \tilde u(\omega) e^{-i\omega t}\mathrm d\omega. $$ If the dynamics is linear, then we can just worry independently about how each monochromatic component will react to the dynamics, without needing to pay attention to the fact that they are unphysical, and then put it together later when we Fourier transform back to the time domain. Whenever we deal with the physics of monochromatic waves (as in, say, the Helmholtz equation, or phasor analysis) that's always the underlying mindset.

To create pulses you start with an pure monochromatic wave and add a pulse shape. If you now apply a Fourier transform to this pulse shaped wave, you will see that your delta spike got broader. So the Fourier transform is your link between the space and time domain. Basically the sharper you want your pulses to be, the more high frequency components you need to archive the desired pulse form.

Here is a visualization of the Fourier transform of a pulsed signal. You can think of the low frequency blue line as your starting monochromatic frequency and the higher order ones are those you need to get your pulse shape

The pulse rate is set at 4Mhz but the photons are well separated. The color drifts a few nanometers but of course each pulse has its own color.

Somehow an exception are sodium-vapor lamps, for which Wikipedia says:

What about a laser? Here a picture from Wikipedia about Laser: 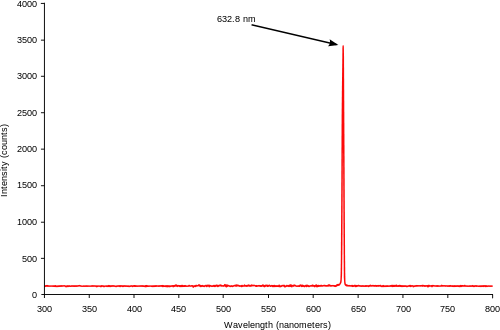 Spectrum of a helium neon laser illustrating its very high spectral purity (limited by the measuring apparatus). The 0.002 nm bandwidth of the lasing medium is well over 10,000 times narrower than the spectral width of a light-emitting diode.

Taking in account that the engineering possibilities to create pure crystals and constant temperatures and constant currents and so on are limited then an bandwidth of 2 picometre are nearly monochromatic.

A rapid, transient change in the amplitude of a signal from a baseline value to a higher or lower value, followed by a rapid return to the baseline value.

So switching on and off a light bulb we create a pulse. But if this light is not monochromatic, the pulse then more is not monochromatic. The emitting photons electrons will emit at different temperatures and by this emit photons of more different energy values than in the continuous mode.

The same dilemma for a laser pulse. Switching on and off the power source the lasers crystal heats up and cools down and the bandwith will be broader.

Which possibilties do we have to create a monochromatic pulse? @PhysicsDave mentiones in his answer a

Even if all supposes would be solvable, the last one is not solvable under room temperature conditions. The electrons are dislocated and this dislocation has a random distribution. Never under such conditions theoretical one will get monochromatic photons. Would it be possible to create photons which are "more" monochromatic as the detection methods I don't know.

Cooling a material nearly to zero and using material, in which the atoms have integer spins (like helium-4) this atoms wil behave as an particle and a excitision should lead to a photons emission at one wavelength. Unfortunately - if i remember right - only some part of the helium-4 atoms are in superposition, so even for superfluid helium-4 one will not get only one wavelength.

Not the answer you're looking for? Browse other questions tagged visible-light waves electromagnetic-radiation frequency signal-processing or ask your own question.

1
Thinking Clearly about Fresnel Zone of Short Pulse:
3
Negative frequency contributions for very short pulses?
1
Why do pulses get reflected by a fixed end?
0
Why monochromatic waves exist even theoretically
7
Can we compress microsecond duration laser pulses by a factor of 1000?
2
Can a spatially coherent light source be monochromatic but not temporally coherent?
0
Can a gaussian pulse be a pure tone?
4
Non-monochromatic (multi-wavelength?) lasers
1
Monochromatic Polarization