Why does a body always rotate about its center of mass? [duplicate]

Ask Question
Asked 3 years, 11 months ago
Active 5 months ago
Viewed 28k times
44
$\begingroup$
This question already has answers here:
Do objects rotate around the torque vector or its center? (2 answers)
Closed 3 years ago.

I found after searching that this question has been asked before. But all the answers were not convincing.

Suppose I have a body which is free, not constrained always rotate about its center of mass (COM). Why is that so?

But I ask it again with hope of the question not getting closed and getting a better succinct answer.

I was thinking that motion about the COM is the most stable one and the rotation about other points degenerates. I don't think it's right. Is it?

You presumably already know that in the absence of external forces, the center of mass of any collection of particles moves at a constant velocity. This is true whether they are stuck together in a single body or are just a bunch of separate bodies with or without interactions between them. We now move to a frame of reference moving at that velocity. In that frame the CofM is stationary.

Now suppose that the particles are indeed stuck together to form a rigid body. We see that the body is moving so that: 1) the CofM remains fixed, 2) all the distances between the particles are fixed. (This second condition is what is meant by a $rigid$ body after all).

A motion with these two properties, (1) and (2), is precisely what is meant by the phrase ``a rotation about the CofM''

Here is one more way to look at this:

Imagine two stones tied together with a massless rod and let one stone to rotate around the second one being fixed.

In that case there must be a force that accelerate the first stone perpendicular to its velocity and causes it to rotate around the second one. The whole setup is free, so there is no counter force to equalize and this setup violates Newton's laws.

If we want to rotate this stone-rod-stone body with respect of Newton's laws we must add and arbitrary point it will be rotating around. In this case both stones are revolving around this point, radial force is applied to both of them and they have opposite direction. The forces must cancel out completely and they cancel out only if the arbitrary point is placed exactly in the centre of mass.

In fact, the instantaneous center of rotation doesn't instantaneously shift to be at the center of mass of the object once the external forces stop acting on the object. Imagine you have a bowl and you drop a ball into it so that it's initial point of contact is close to the rim. The ball will tend towards the bottom of the bowl as that's the location with the lowest gravitational potential. However, before it gets there, it oscillates a bit before coming to rest. The bottom of the bowl is a stable point.

I'm not a physicist, but I'll take a stab at it.

A simplified example of your spinning sphere that may help you with this concept would be a disk made all of one density of material. An example would be a child's top or a gyroscope that you can spin on a flat surface. Every part of the disk has a matching balancing part on the opposite side of the disk. Each balancing pair of parts of the disk have the same mass as each other, have opposite motions to each other when rotating and create opposite balancing centripetal forces that keep the disc's rotation balanced around the center of mass (which is also the disk's geometric center).

The picture below may help you visualize this: 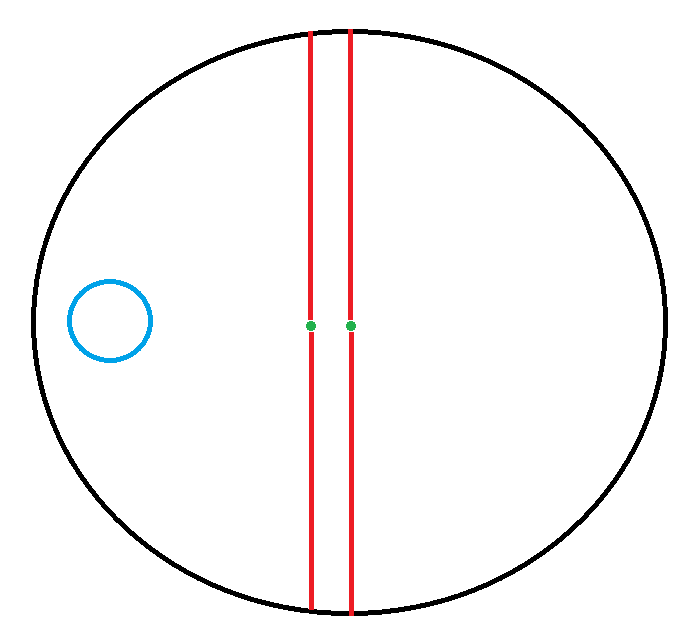 So to conclude, every time you add to (or subtract from) the mass of a rotating object, the object changes the location of it's center of rotation so that the forces caused by rotation remain in balance. The point of rotation is the center of all the mass of that object.

I was thinking that motion about the COM is the most stable one and the rotation about other points degenerates. I don't think it's right . Is it ?

Let's go with this for a second. I'm not sure the term 'degenerates' it completely right here but I think you are on the right track. Consider a perfectly balanced wheel on an automobile. Its rotation is not free but rather fixed in its center which is also its center of mass (because it's balanced.) When it spins, there is no force on the axle.

Now consider what happens if we attach a weight to the rim of the wheel and make it unbalanced. When wheel spins, it will now apply forces to the axle. If you've ever driven in a vehicle in such a situation, you will feel this as a vibration at most speeds as the wheel continually 'jumps'. Why does this happen? It's because the axle is forcing the wheel to rotate around a point that is not its center of mass. In other words, only rotation around the center of mass is neutral; in order for an object to rotate around another point, another force is required to keep it in place. By definition, a 'free' object is not subject to any such force.

One way to see this is to take a frisbee and spin it around a finger inside the rim. It will rotate around your finger (which is not at the center of it's mass.) Your muscles will need to constantly resist the motion in order to keep it in place. If you suddenly remove your finger, it will fly off in a straight line and continue to spin around its center of mass.

Because Inertia Moment is mimimum when rotating around center of mass, so any force applied to the body will "pass" through the "path" of minimal resistance.

Basically it is the point for which the sum of all momentums is minimal.

Also water and electric current flows through paths of minimal resistance. I wanted to do a short answer on purpose, because I think the alternative answer is just a "show the calculations" which is not very intuitive.

In fact, a solid body doesn't rotate about a point (COM), but around an axis on which the COM is situated.

If you let the sphere spin from zero angular velocity to an angular velocity x, without imparting a linear momentum on the sphere the linear momentum can only be conserved if all the moments of the dm's (infinitely small masses if we consider the sphere as a continuous mass) cancel, which is the case if the COM lies on the axis of rotation. Of course, if you consider different axes of rotation they have the COM point in common.

For two separate bodies bounded by an attractive force as gravity, it is possible to say that the bodies rotate about the COM of the two bodies. Like two masses connected by a rope, but with the rope removed. In this case, the rotation is also about the axis of rotation (perpendicular to the rotation plane), but as well about the COM point.

I understand this to be a mathematical or psychological phenomenon rather than a physical one.

We don't have to breakdown movement in this way. It so happens that (in Newtonian mechanics) we know how to deal with momentum and angular momentum separately. Different decompositions would be possible. But they almost certainly would be more complex and less intuitive. For example, suppose that angular momentum always led to an additional 'linear force', which was directional, and depended on the relationship between the mass distribution and the axis. It would be much harder to understand what it actually consisted of. We are used to rotating things about their center of mass.

When you solve Newtonian problems of torque, you usually have to judiciously choose a point to resolve torques around. The solution would be the same, but the technique is much easier if you choose the right point, for which as many forces as possible cancel out. 'Center of gravity' is just the standard heuristic to the general case of this problem.

As you know from riding a bicycle is it possible to balance at a very slow speed without falling if you can keep the weight balanced equally on both sides. As with a seesaw. It turns out that you can always find a way to balance a rigid body regardless of how it touches the surface underneath by placing the mass exactly right so it is evenly distributed. 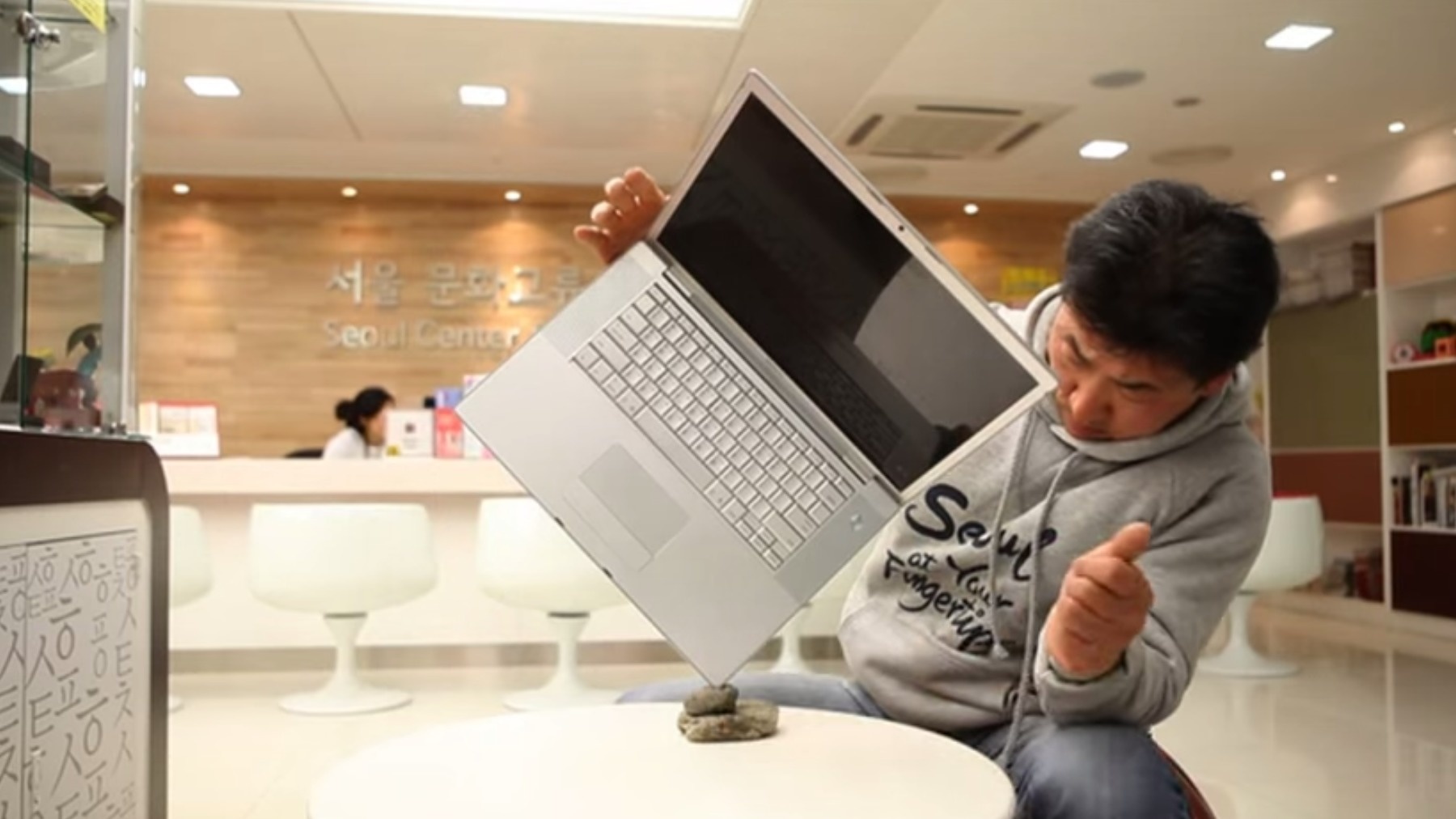 You can see a video on how this can be done here: https://www.youtube.com/watch?v=OGRUf1PLJdY

If you now recognize that this is true regardless of how the rigid body is orientated in the first place, you just need to consider if all these "divide the mass in equal parts"-division lines have anything in common or not. It turns out they all go through a single common point (this can be mathematically proven) which you probably have already guessed has named the center of mass.

It can also be mathematically proven that a rigid body behaves the same as a single point with the full mass of the rigid body. This makes newtonian calculations (like the movement of the Earth around the Sun) easier.

Not the answer you're looking for? Browse other questions tagged rotational-dynamics reference-frames or ask your own question.

6
Why is torque measured about the centre of mass?
6
Do objects rotate around the torque vector or its center?
2
why does unhinged body rotate about centre of mass when off-centre force is applied?
1
What becomes the center of rotation when torque is applied?
17
What is the proof that a force applied on a rigid body will cause it to rotate around its center of mass?
16
Why does an unhinged body rotate about its centre of mass?
9
Does Quantum Theory allow an Electron to take a fraction of Photon energy
4
What exactly is center of mass?
1
Object Pushed by Multiple Forces
0
Force couple off centre of mass in space
See more linked questions