Why would you not introduce donors AND acceptors into a semiconductor?

Is it true that for an even number of donors and acceptors every extra electron given by the donors would fill a hole provided by the acceptors and the net extra charge carrier density by impurities would vanish?

If so, then there should be no more holes at all in a $n$-doped semiconductor, no? But I saw in derivations that there still considered $n+p$ to be the total carrier density.

Yes it is possible, and in fact common, to dope a semiconductor with both acceptors and donors. When this is done it's called (partially) compensated doping.

The effect is that the carriers produced by the more concentrated dopant are reduced by the number of available impurities of the other type.

For example, it's common to form a p-n junction by applying a moderate dopant concentration (say 1015 cm-3) of one type, say donors, in such a way that they diffuse deeply into the bulk material. And then to apply a much stronger concentration (say 1017 cm-3) of the other type (acceptors), but only allowing them to diffuse shallowly.

Then the surface region has both acceptors and donors, but because the acceptors are at higher concentration, the net effect is to produce p-type material, with effective concentration $N_A-N_D$. Since $N_A \gg N_D$, this is effectively just $N_A$.

You can also see compensation being used in this diagram of a typical npn BJT structure, where the emitter is formed by high-concentration donor doping in a region previously (or subsequently) doped with acceptors to form the base region: 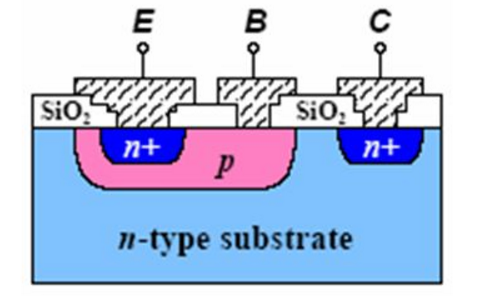 If so, then there should be no more holes at all in a n-doped semiconductor, no?

If the concentration of the two dopants is equal, the number of carriers will be reduced, but they won't be reduced below the intrinsic carrier concentration $n_i$, because the Law of Mass Action tells us