My textbook says that we can infer from Kepler's second law that angular momentum is conserved for a planet, and therefore gravity is a central force.

Right, so we can assume $m$ is constant, and $r^2\omega$ as well, by Kepler's second law. What about $\theta$ though? How do we know $\theta$ is constant?

For circular orbits, I can see that $\theta=\frac{1}{2}\pi$, but how about elliptical orbits?

Okay, I think I got it. We're considering a solid object (planet) rotating about a fixed axis of rotation, so technically, we should be using $\vec L=I\vec\omega$. But I guess we can approximate the moment of inertia for a planet as $mr^2$, considering the spatial dimensions we're working with. And therefore we get $|\vec L|=I|\vec \omega|=mr^2\omega=$ constant. Given that a planet doesn't 'turn' suddenly, we can also assume the direction of $\vec \omega$ being constant.

The Kepler's second law states that the radius vector from the Sun to the planet sweeps equal areas in equal times. In another words, the rate of change $\frac{dA}{dt}$ is constant. Consider the figure below, 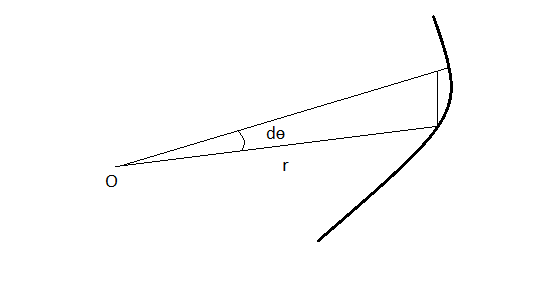 That alone says that the magnitude of angular momentum is constant.

To arrive at the angular momentum vector being constant, we need to know that it's direction is constant as well. This is a consequence of orbits being planar, which is part of Kepler's first law.