Intensity of subsidary maxima in a diffraction grating pattern?

I was wondering if anyone knew what the intensity of subsidary maxima was?

My intuition would tell me that it would be the square of the amplitude of the wave illuminating the slits (I am thinking of the phasor diagram and what the net phasor may be as the angle is increased from one minimum to another.) On the other hand my lecturer said that the subsidary maxima arise as you increase the number of slits, so that would suggest that the intensity is dependent on N? I'm not sure if he may just have been talking about their intensity relative to the principal maxima, whose intensity I know increases as the square of the number of slits. So then indeed subsidary maxima would appear to vanish as N is increased simply because their intensity is not changing but the principal maxima intensity is increasing as a square.

Unfortunately I have not been able to find anything discussing the intensity of the subsidary maxima...

The intensity pattern for multiple slits is quite complicated.

So the diffraction grating can be thought of as $N$ slits each of width $b$ and centre to centre separation $a$. 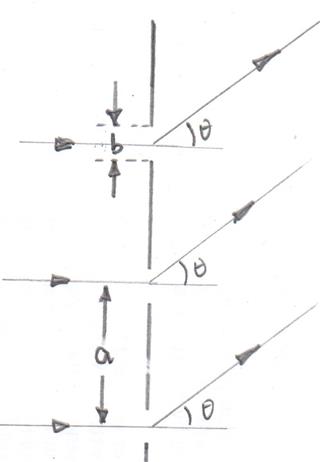 The first term with brackets is the diffraction envelope which modulates the interference pattern produced by the multiple slits.
I will assume that the slit width $b$ is small enough such that the diffraction pattern is very broad and does not affect the subsequent analysis very much.

The second term is the one which generates the principal maxima and the subsidiary maxima.

The next bit surprised me.

This was a surprise because I have always been lead to believe that the intensity of that subsidiary maximum would be much, much smaller than that of the adjacent principal maximum. 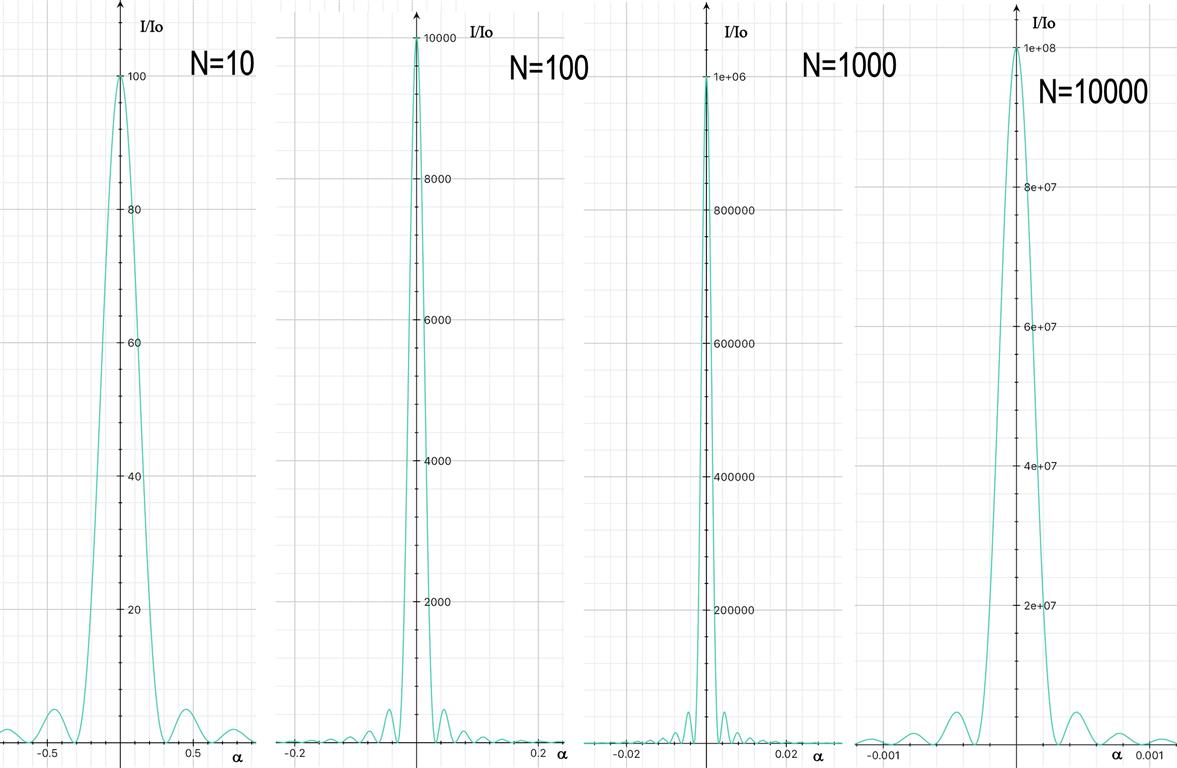 The diffraction pattern you see is the square of the Fourier Transform of the aperture function. Now the convolution theorem tells us that the FT of a convolution of A and B is the product of the FT's of A and B. In other words - if you have a diffraction grating made of slits of finite width, you can consider the diffraction pattern to be the pattern obtained from a perfect grating, multiplied by the pattern obtained from a single slit of finite width (a sinc function if you were keeping track).

I had not read your question properly - you were asking about the effect of having a "perfect" diffraction grating with a finite width (finite number of slits). Such a grating can be thought of as the product of a "top hat" function and an infinite grating, and the diffraction pattern will be the convolution of the Fourier transforms of those two apertures (this is the convolution theorem "in the other direction").

The Fourier transform of an infinite array of slits is an infinite array of peaks; the FT of the top hat function is (again) a sinc function - but now, since the top hat is wider than the spacing between the slits, a good number of peaks of the sinc function will fit between two maxima in the diffraction pattern; however, their intensity will be the same, regardless of N (as long as N is large enough that the pattern due to the neighboring peak can be neglected). The only thing that will change is the spacing of the peaks.

However, when N is not "very large", it will definitely have an effect. The following plots show this: 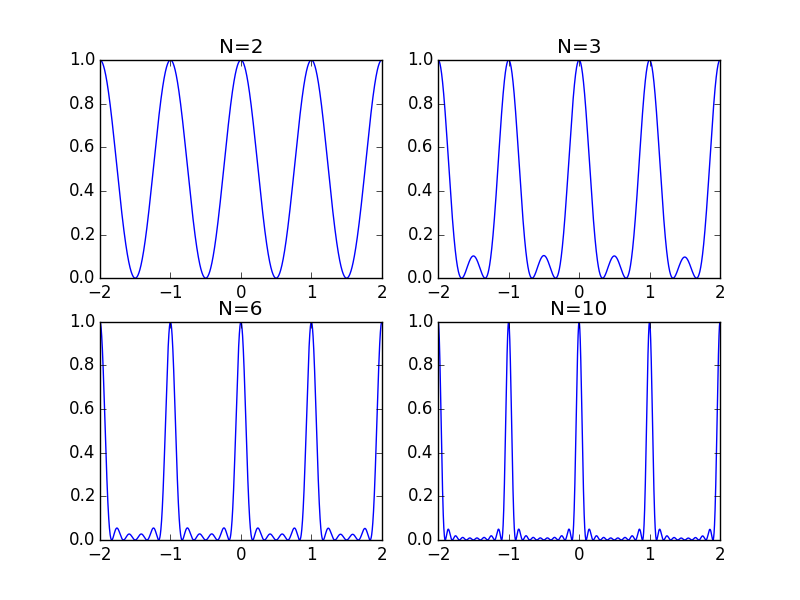 The issue here is that there is a degree of constructive interference between the $n^{th}$ peak of one maximum and the $(N-n)^{th}$ peak of the next one... and even some interference from maxima that are further away. Showing this for just N=3 illustrates this point: 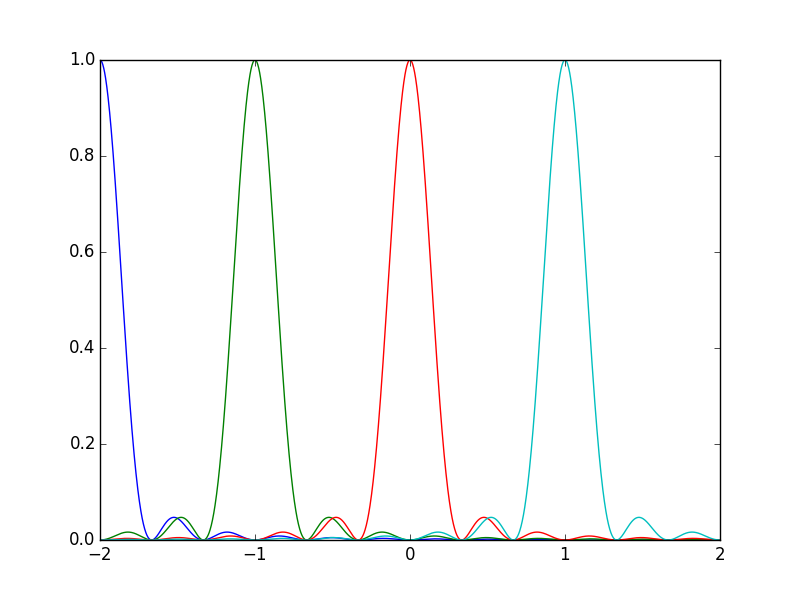 Now as you can see, the secondary peaks are a bit asymmetrical, which makes it hard to find an accurate sum for the general case (the N=3 case is a bit easier because peaks of the same order overlap and cancel the asymmetry).

If you can assume the peak is always at the midpoint between the zeros, you can write an expression for the amplitude - it will be the sum of squares of the peaks that overlap. The function describing the basic pattern is

Now a given submaximum will have contributions from all the other maxima - you can see that you would have to construct a series summing the contributions. For the nth submaximum when there are N slits, the first four terms would be:

in reality, only a couple of terms will need to be included, and only when N is quite small. I will leave it up to you to figure out if you can turn this into a closed form (analytical) sum - but given the (false) assumption of symmetry I don't think it's worth the effort.

Evaluating this exactly (from the convolution), the values for the max of the first secondary peak as a function of N are:

The value you would expect from the expression above would have the first peak converge to 0.04509 - it doesn't look like that's going to happen as the asymmetry puts the maximum a little bit off to one side.

The Python code I used to generate these diagrams:

Not the answer you're looking for? Browse other questions tagged optics interference diffraction or ask your own question.