Compositions of stars at different stages

The 'input' parameters for stellar evolution are (*1): mass, binarity, metallicity (a broad term for initial chemical composition), spin, magnetic fields ... etc. Based on these parameters, stars seem to evolve in a very regular way, first burning hydrogen in their core, then i) burning hydrogen in shells outside of a helium core, ii) burning heavier elements in the core (e.g. helium into heavier elements) or iii) stop burning altogether and transition into a remnant state like a white/brown dwarf. Which of these paths they follow depends on their initial configuration (mostly their mass). The type of evolution they undergo then determines their chemical evolution.

Attached is an image showing the chemical structure ('abundance profile') of a massive (15 $M_\odot$) star, right before it explodes as a thermonuclear ('core-collapse') supernova. You can see that the structure is very complex, and involves a large number of species, certainly not just hydrogen and helium. To calculate the structure or composition of stars, one must use numerical simulations---in particular, the standard code is called MESA, which can be downloaded here, and specifications can be found here. MESA was used to produce the solid lines in the attached figure. 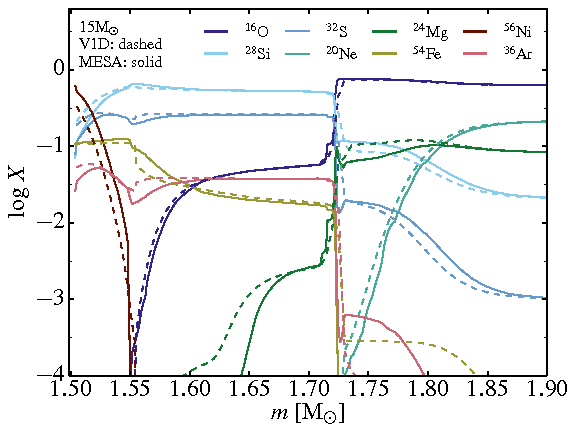 *1: I've put these in order of their significance (as we understand it today) in determining how they evolve. i.e. mass is the most important parameter, and so on.

Not the answer you're looking for? Browse other questions tagged nuclear-physics astrophysics stars stellar-physics metallicity or ask your own question.

6
What's the difference between a red giant and a red supergiant?
13
What is the Sun's core made of?
8
How to explain the existence of heavier elements in Population I stars and in Population II stars contain lighter one
3
What would a very massive rocky body look like?
5
What types of fusion reactions happened in population III stars?
29
Metal-rich star formation
4
Nucleosynthesis: other than big bang and supernova
2
What is the heaviest element being produced in Sun?