Must magnetic field lines close upon themselves or go to infinity?

Conventional wisdom tells us that magnetic field lines must either form closed loops, or shoot off to infinity. However, this leaves out the possibility that a magnetic field line, even if it stays confined inside a compact region of space, can in principle come back to close to its starting point but miss it, forming a quasi-loop that never quite closes.

In particular, I suspect it's possible to set this up using a twisted-torus magnetic field like the ones in a tokamak, where by controlling the relative strengths of the toroidal and poloidal components one can engineer situations where magnetic field lines close upon themselves after $N_\mathrm{t}$ toroidal loops around the torus and $N_\mathrm{p}$ poloidal loops about it, but one can also engineer things such that this never quite happens and the magnetic field line occupies a dense subset of a surface (or even a dense subset of space?). 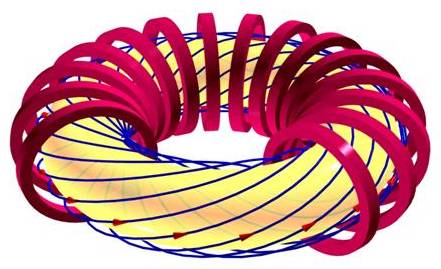 Alas, in looking for an explicit expression for such a field I got drowned in technical results for tokamaks and magnetic fields in neutron stars, so I'll just leave this here in case someone wants to have a crack at it.

Is this possible? I'm for now mostly interested in results for this specific configuration, but if this configuration won't work (i.e. if some result guarantees that field lines in this setting do close upon themselves) then I'm also interested in examples from further afield.

Nope. Conventional wisdom is wrong about this one. Magnetic field lines can have much more interesting configurations.

Magnetic field lines are trajectories of Hamiltonian systems and, as such, are typically chaotic, which means they never close on themselves (if they did, they'd be periodic, not chaotic). This case is made very clear in this paper by Phil Morrison: Magnetic field lines, Hamiltonian dynamics, and nontwist systems (e-print, without figures).

Again, in the same way that a real-life mechanical system is typically chaotic rather than periodic, real life magnetic fields will most often also be chaotic, even for simple configurations and that's actually probably good.

In the image bellow, electric current flows through the black lines (belonging to two perpendicular wire loops), generating the field line showed in red. From a paper that makes a good case that

chaotic magnetic-field lines are ubiquitous in the modern technological world. 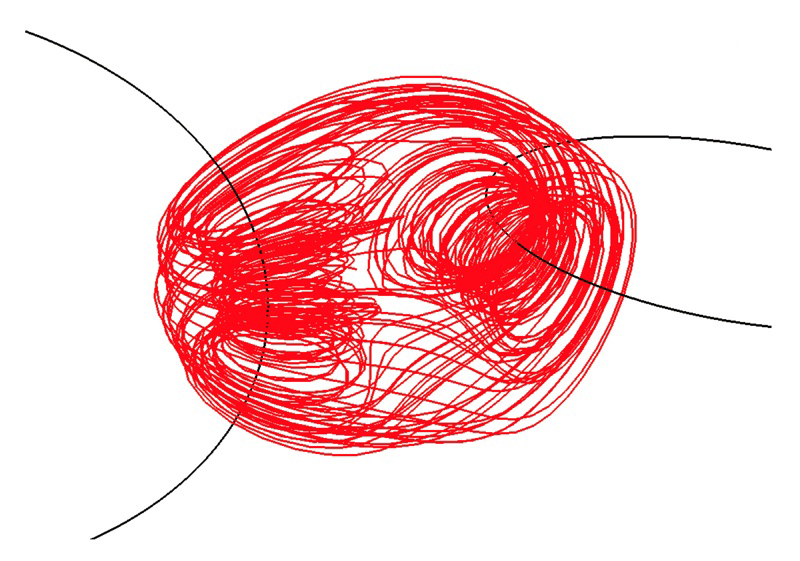 7
Magnetic field lines
8
Reluctance of torus shaped iron core with embedded wire loop
1
Electric Field lines that close on themselves
3
Is a dipole fusion reactor feasible?
3
Numerical solution to the relative gravitational time dilation of induced dipolar gravitational fields
0
Behavior of $r$-component of a $\mathbf{B}$-field inside cylindrical magnet
0
Doubt about the explicit toroidal and poloidal components of a confined plasma in Tokamaks