Why can't concave lenses be used as magnifying glasses?

I see why convex lenses work, but why can't concave lenses work? The light from an object diverges, making it wider, so technically that should make the object bigger, shouldn't it? Why isn't this the case?

In your image it is not clear how you actually end up with a "big image". It is not enough to take into account just one light ray per point on the object.

You also need to consider how we actually see something, because if you think of it, at any moment there is light hitting our eye that comes from all kinds of directions and all kind of objects. However only a small part of it is actually used to make up the image we see.

You need to distinguish between virtual images and real images.

In the case of Virtual images, the light rays diverge on the viewer side, so rays coming from one point of the object are not focused into a single point on the viewer side anywhere. Therefore one cannot have a projection directly onto a screen. However all the rays from one point of the object appear on the viewer side as if they are coming from a single point (if there was no lens). The eye re-focuses all these rays and produces a real image inside the eye, in the same way as it would do when looking at a real object the size/distance of the virtual image.

Let's look at the four combinations of virtual/real convex/concave lenses for a single lens:

If the object is located outside the focal length of the lens, a real (reversed) image is formed on the viewer side. This is effectively what you have in case of cameras, though they have somewhat more complicated optical system, since for instance they need to keep the distance from the lens to the film/sensor/screen constant, independent on how far away the object is. If you take a magnifying glass and look at distant object through it you should also get this effect. But note, that in that case your eye is not where the image is formed but further away (to the right in the image below).

If the object is within the focal length of the lens a virtual image is formed. Light rays on the observer side are diverging but appear to come from a point corresponding to a larger upright (virtual) object. This is the case for the magnifying glass when used to magnify things. 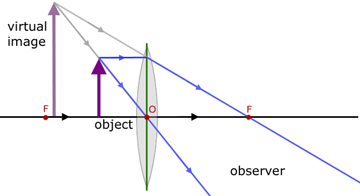 Independent on whether the object is inside or outside the focal length, these lenses always produce a virtual image that is smaller than the original. 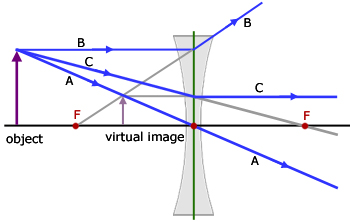 Not the answer you're looking for? Browse other questions tagged optics visible-light refraction lenses or ask your own question.

28
Why do nearsighted people see better with their glasses *rotated*?
1
Why Image is not enlarged if we keep convex lens first and concave lens at last?
0
finding focal point of concave lens using concave and convex lenses
2
Convex Lenses and Inverted Images
10
Why do convex lenses not disperse light like prisms, given that entry and exit points aren't parallel?
1
Does the position of the final image in a multiple lens system found by the thin lens formula always agree with the ray diagrams?
3
Why don't spectacles form these weird images?
0
Can a single optical device converge as well as diverge a parallel beam of light?
2
Definition of a convex lens?