Acceleration of a ball rolling down incline without slipping

Take the example of a sphere rolling down an incline without slipping. Is it true that for the ball to be not slipping, $mg sin \theta=F_f$? To me that makes no sense because then $F_{netx}$ = 0 and then $a$ would also be zero.

Assume that $F_f$ does equal $mgsin\theta$, what would happen? Doing a force analysis of the situation, it seems like the ball should not be accelerating at all. Is there a distinction that I'm missing here?

Additionally, why do we only include $F_f$ when analyzing torque on the system? 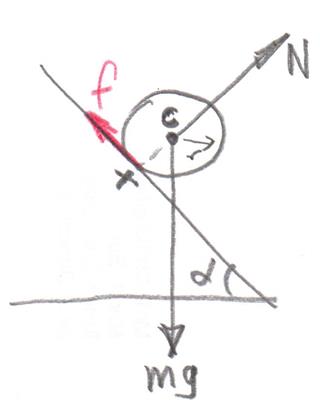 In this case it is fairly obvious as to the direction of the frictional force but it is worth a little consideration as for some problems that direction is not quite as obvious eg a ball rolling up a slope.

If the ball slip down without rolling its acceleration would be greater than if the ball was rolling with no slipping.
In terms of energy the ball now converts its loss of gravitational potential energy into both linear and rotational kinetic energy so its final linear speed would be less when rolling.
That means when rolling the net force down the slope acting at the centre of mass must be smaller than when there is no rolling.
Thus the frictional force must act the slope.

The angular acceleration of the ball is in the clockwise direction hence the torque about the centre of mass must be clockwise again indicating that the frictional force is up the slope.

One can now set up two equations $F=ma$ and $\tau = I \alpha$ and with the no slipping condition $a=r \alpha$ solve a problem.

It is true that if the slope is too steep and/or the coefficient of static friction is too small the ball will roll and slip under the action of a kinetic frictional force ie the no slipping condition cannot be satisfied but usually this is not the case.
Perhaps you misheard your teacher?