Potential on the axis of a ring of charge - no need for directional component? 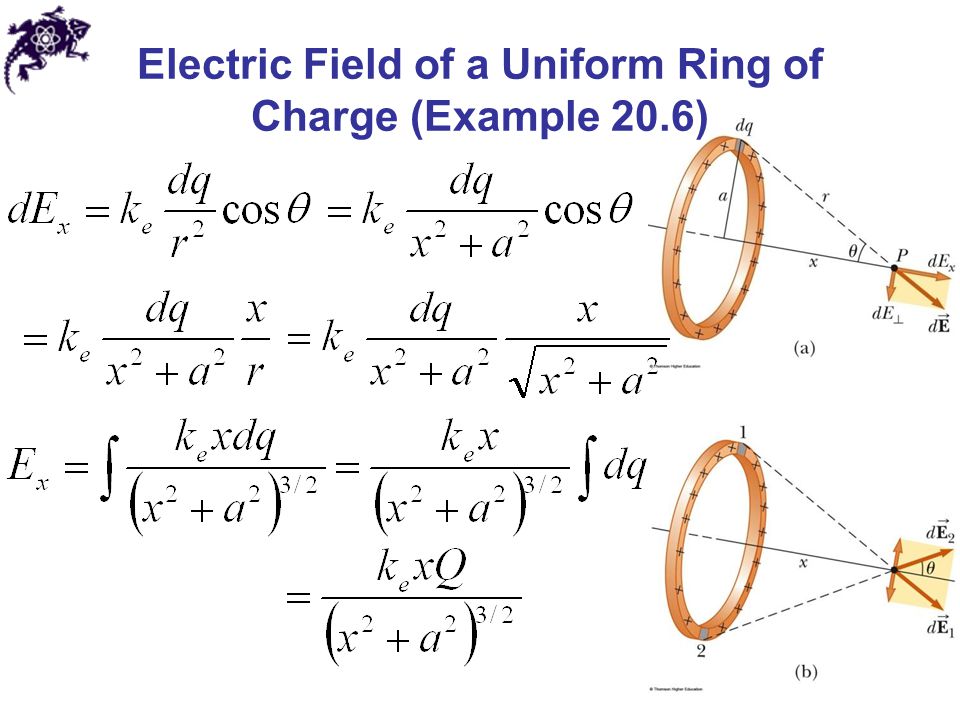 However, when calculating potential, we don't consider the components of the electric field that a given charge on the ring $dq$ contributes. All we do is calculate $\frac{kdq}{r}$ for each piece of the ring and sum them up. But I don't see why this works. Moving a charge along the axis going through the center of the ring from infinity to a point $P$ away from the center of the ring, each charge $dq$ will only contribute a horizontal component of electric field, not a vertical component. So why do we take two separate approaches when calculating field and potential?

Adding different answer since I'm trying different approach. Perhaps, this one is a more detailed and illustrated version of "physical answer" from the previous answer.

Lets choose small $dq$ on the ring and remove the rest of the ring completely. We want to find electric potential in some specific dot on x axis (red dot on pict) for this situation. To do so, we put unitary charge in this dot and measure work of the field on moving charge into infinity. 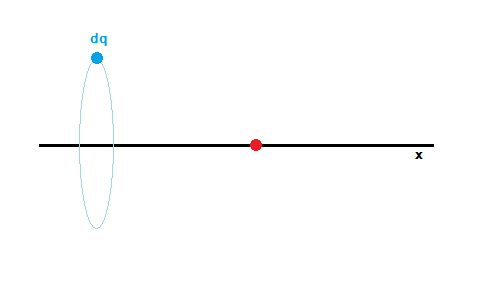 Well we can move charge via different paths. Electric field is conservative, so regardless of chosen path we will get the same amount of work. The difference is that on some paths work can be calculated easily, while on others resulted integral will be quite tricky to solve. Most convenient way to move is directly from $dq$ as on pict 2: 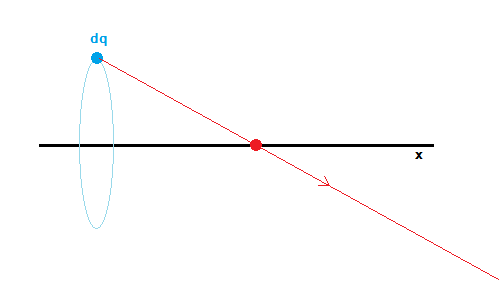 In this trivial case work is $\frac{kdq}{r}$. What will we see on choosing path along x axis? Work will be the same, but which forces will lead to it? 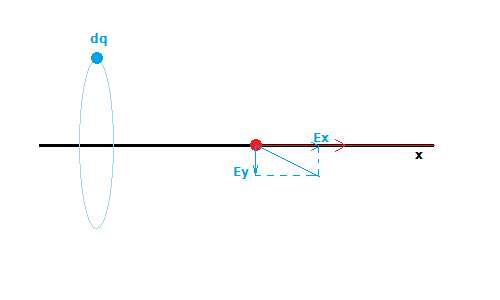 $E_y$ doesn't contribute into the work, since it's normal to our shift, so we need to integrate only $E_x$. So integral of $E_x$ along x in this situation will give us the same $\frac{kdq}{r}$. But this is exactly how you were going to calculate potential in the original task.

Ok, back to the original task. Now we know, that integrating only $E_x$ along x axis gives us $\frac{kdq}{r}$, so we can use this formula in calculation. Generally speaking, math proves, that we can ALWAYS use this formula, because potential is additive since electric field is additive. But this time we explicitly proved it to adjust our intuitive view of the task, which was originally against this formula.

UPD: So the unclear question is why $ \int E_xdx = \frac {kq}{r} $ for moving along x to infinity. This result arises from fact, that electric field is conservative (so amount of work depends only on the endpoints of that path, not the particular route taken) while we know this work for different (trivial) path.

However, this result looks weird to you, isn't it? You expect integration of $E_x$ instead of full $E$ to give lesser final value. General reason for these integrals to be the same is that replacement of $E$ with $E_x$ is compensated by differences in path. Well, it can be checked directly by solving integral, but I have another pict to illustrate the differences more friendly. 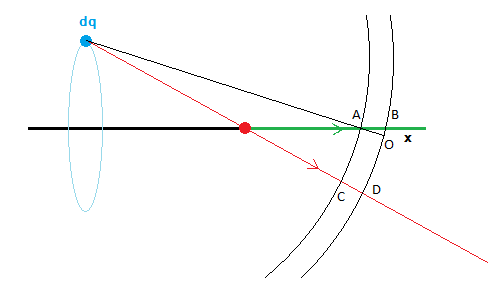 We are comparing work on green path and red one. Lets draw two circles with centre at $dq$, one of arbitrary radius $r$ and the second with slightly larger radius $r+dr$. They crosses green path with $AB$ and red path with $CD$. You may have noticed, that $CD = dr$, while $AB$ is longer, since it isn't parallel to radius going through $A$ to $O$. Considering $dr << r$, the work done on $AB$ is $E_x \cdot AB = E\cos\theta \cdot AB = E \cdot AO = E \cdot dr$ which is the work on $CD$ ($\theta$ denotes $\measuredangle BAO$). So both paths can be divided into intervals of the same work, thus full work on them is the same as well.

You see, even if fields are compensating each other, potential can be simply summed from components disregarding field interaction (or actually summing means "calculate fields interaction")

So for the ring, you have bunch of $dq$ and you simply sum their potentials disregarding field interaction.

Formulas aren't that easy to digest without illustration of lack of interaction. Lets consider two situations:

Lets take unitary charge and bring it from infinity along axis x to some point, measuring our work. Lets start with second situation. For each point of our path, electric field has two component: orthogonal and tangential in respect with axis, but by compensating orthogonal force we don't do any work due to direction, so our work will be integral of force compensating tangential field only.

Wait, we'll get exactly the same work as in situation 1, where orthogonal component of $dq$ field is removed by other charges and only tangential is counted. And what amount of work will we get? In situation 2 it's obviously potential of destination point, which is well known: $\frac{kdq}{r}$. So we proved, that in situation 1, component of potential brought by $dq$ is the same as if no other charges were presented.

Not the answer you're looking for? Browse other questions tagged electrostatics electric-fields charge potential vectors or ask your own question.