We know that there are many kind of orbitals and we also know that these are regions of maximum probability where an electron can be. Orbitals are plotted generally on XYZ plane.

The doubt arises from: 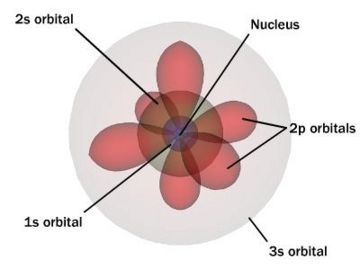 So here my doubt lies, we show each orbital individually for the sake of understanding but how we visualize these for an atom for eg carbon atom has one 1s orbital, one 2s orbital and 3 2p orbitals but how we show all orbitals in a single atom [1s and (2s,2p) orbitals are of different energy levels] and do all these different orbitals overlap inside the atom? (because we generally consider reference point as origin for plotting any 3d figure) and is the image valid ?

Yes, the spatial support of the different occupied orbitals in, say, a carbon atom, will generally coincide, and the picture you show is essentially accurate.

However, it's important to remark that 'overlap' has a special meaning in quantum mechanics (in particular, given two wavefunctions $\psi(\mathbf r)$ and $\varphi(\mathbf r)$, their overlap is defined as the quantity $\int \psi(\mathbf r)^*\varphi(\mathbf r)\mathrm d\mathbf r$), so one needs to be careful in how you use it. In addition, the quantum state of a carbon atom is more complicated than "two electron in 1s orbitals, two in 2s and two in 2p", because those electrons are indistinguishable, which means that the full state is something called a Slater determinant; that's probably for you to learn later on, but keep in mind that there are plenty of additional complications in that direction.

1
Number of Orbitals - Hydrogen Orbital just one, but why can we plot also higher states e.g. SPDF orbits?
0
Difference between boundedness (electrons around nuclei) and color confinement (quarks)

1
What do atoms really look like?
22
Why does the conjugated $\pi$ bond not violate the Pauli Exclusion Principle?
21
What does an orbital mean in atoms with multiple electrons? What do the orbitals of helium look like?
1
Molecular Orbitals and Nodal Symmetry
0
What would the shape of a singly excited hydrogen atom be?
8
How do orbitals exist in an atom?
1
How are Quantum Mechanical energy levels related to atom shells?
0
Generating random position for electron within 3D orbitals
0
Band Theory - which orbitals overlap?