In an elliptical orbit (with non zero eccentricity) the gravitational force has in general a component along the tangential direction which accelerate the body. 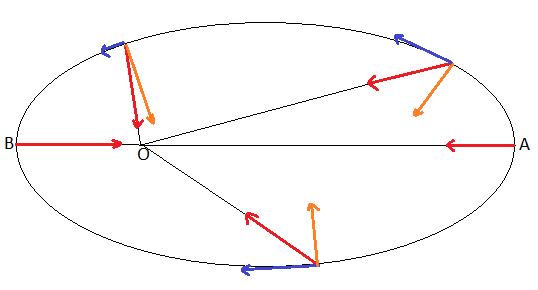 As the planet is moving faster the planet has gained kinetic energy at the expense of a loss of gravitational potential energy due to the planet being closer to the Sun.

The force of attraction on the planet due to the Sun is doing work to increase the kinetic energy of the planet because as the planet is getting closer to the Sun there must be a component of the planet's displacement in the direction of the gravitational force.

The gravitational force of the host planet causes the change in angular velocity.

If you have no issues with circular orbit, then elliptical orbit is no different except that the satellite comes closer to the planet and higher gravitational attraction causes the sharper turn. GR (and Newtonian) math, both describe these orbits.

Consider an object moving straight past a point that doesn't gravitate at all.

In uniform linear motion, the angular velocity with respect to this point starts out very small, then grows to a finite value, and then decreases towards 0 again -- all without any force at all acting on the moving object.

Change in angular velocity doesn't need a cause other than the relative positions of the involved objects changing.

0
Clearing up confusion about orbital mechanics
0
Why is only angular momentum conserved for a planet and not linear momentum?
0
Orbital mechanics: will a satellite crash?
0
Gravity and angular momentum
0
Orbital speed for an inclined circular orbit round a spinning spherical planet
1
Why do satellites settle into elliptical orbits?
9
Non-constant angular velocity in orbit
2
Determining the velocity for a radial impact on an orbiting satellite