If spacetime is curved, how would anyone know? If anyone could tell, would that really be spacetime curving?

I never had a problem accepting that spacetime is curved as a result of matter, until I learned the LIGO experiments showed that evidently the curvature of spacetime can be measured. This, to me, is very strange.

Suppose the entire universe is empty except for two people, floating in space 100 meters apart. Since their masses are so small, spacetime is almost entirely flat compared to the conditions on the surface of Earth. Then suddenly, some incredibly huge cosmic event happens, and unthinkably large gravitational waves pass through the area. Somehow this doesn't kill them. Spacetime goes all spaghetti, and these two dudes are just shaking all over like a jellyfish.

But if space itself is changing, how would they know? They should observe, at all times, that they are still 100 meters apart, since they are not moving in space, but space is moving with them in it... right? Or maybe would each guy think that he is remaining still while the other one just goes totally nuts?

If the changing curvature of spacetime can be measured, what if these two guys were each holding one end of a 99 meter pole? Seems to me being measurable would imply that or one (or both) would have to lose grip and then have to dodge the end as it comes back.

This is probably a well-explored question and I just don't know the answer. I looked around on physics.se and saw a lot of questions like this very informative one and this one that assumes the effects are noticeable but none of them seem to be quite what I'm looking for.

Analogy: how do we know that the surface of the Earth is curved? Well, we could e.g. draw a triangle on the surface of the Earth, and check the sum of the corner angles. If the Earth was flat, you'd always find that the sum of these angles was 180°, so it would be impossible to e.g. create a triangle with two 90° corners. However, since the Earth is curved, this is indeed possible; you could e.g. draw a triangle where one edge follows the equator, and the two others follow meridians from the equator to the north pole.

The same concept would apply to spacetime: simple geometric relationships such as e.g. the sum of corner angles in a triangle would be different in flat spacetime from curved spacetime, and these relationships should be possible to measure to figure out the curvature of spacetime itself.

So what if these two observers were each holding the end of a pole? As the gravitational wave passes through the pole, they would each feel it pushing and pulling on them. As you suggest, indeed one or both would lose grip of the pole if this cosmic event was violent enough. To give a more 'down-to-earth' analogy (pun to become apparent), if you placed two observers a very large distance from the earth with a very long pole connecting them, then as they fell towards the earth in the radial direction, their trajectories would tend towards one another, and each would feel the pole actively pushing them outwards. The situation here is quite analogous.

Then suddenly, some incredibly huge cosmic event happens, and unthinkably large gravitational waves pass through the area... But if space itself is changing, how would they know?

It is simply two beads sliding freely (but with a small amount of friction) on a rigid rod. As the wave passes over the rod, atomic forces hold the length of the rod fixed, but the proper distance between the two beads oscillates. Thus, the beads rub against the rod, dissipating heat.

See this question for more details. Here is an animated visualization: 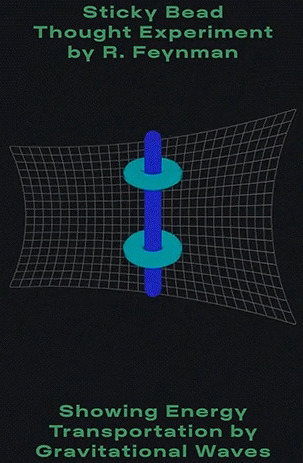 Here is another way that more closely matches the way gravitational waves are detected in practice, based on interferometry:

Not the answer you're looking for? Browse other questions tagged gravity spacetime curvature gravitational-waves or ask your own question.

62
What is really curved, spacetime, or simply the coordinate lines?
21
How close would you have to be to the merger of two black holes, for the effects of gravitational waves to be detected without instruments?
11
Why does the 'sticky bead argument' for (gravitational waves carrying energy) work?

10
Why do we say "Spacetime Curvature is Gravity"?
1
A simple way to measure the shape of warped spacetime
0
Time dilation at a point between two spherical masses that nearly touch
8
How do we know that spacetime is uncountable/continuous/etc.?
0
Would I be able to tell if I was inside a piece of distorted space? Are objects distinct from spacetime?