Can linear momentum be conserved before and after collision in the presence of an external force?

I'm a physics tutor for 11th and 12th grade students. I taught my students that momentum is conserved only when the net external force on the system is zero. But in the books we are following, momentum was conserved in the following cases in spite of presence of an external force:

I explained to my students in all these cases though an external force is present it has negligible effect. But I'm not satisfied with my answer.

Consider your example 1 with two billiard balls, mass $0.16 \,\rm kg$, colliding with a red ball falling down with a speed of $5\, \rm m\,s^{-1}$ and colliding with a stationary white ball.
Applying conservation of linear momentum (assuming there are no external force and the collision is elastic) results in the red ball momentarily stopping and the white ball moving downwards at $5\, \rm m\,s^{-1}$.
The impulse (change of momentum) on each ball is $0.16 \times 5 = 0.75 \, \rm N\,s$.

Peter Bohacek has produced many Direct Measurement Videos and the relevant one for this answer is Billiard Ball Collision three consecutive frames from which are shown below. 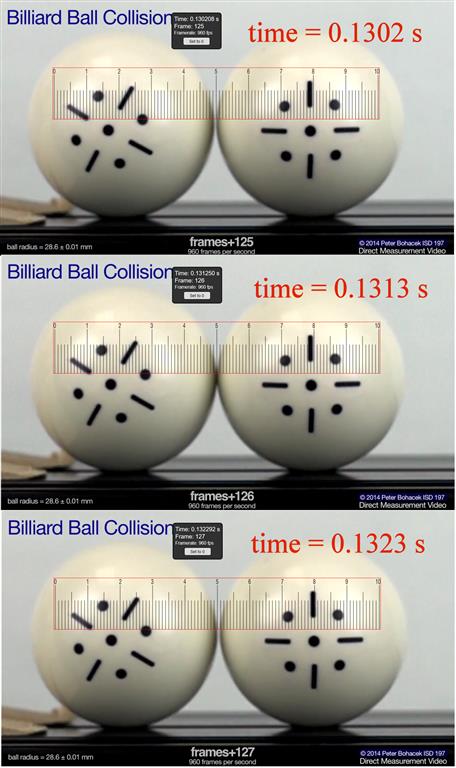 More time could have been spent analysing the video to get a more accurate upper bound for the collision time which might be the basis of a nice assignment?

You are basically telling them the right thing. In all three situation if we assume that gravitation is just an external force, momentum is not conserved. The reason is that we don't take the momentum transfer between the object in the system to the source of the external force (in this case the earth) into account.