Let's consider the following system shaped as in the picture below, in which the only fluid contained is water at room temperature. 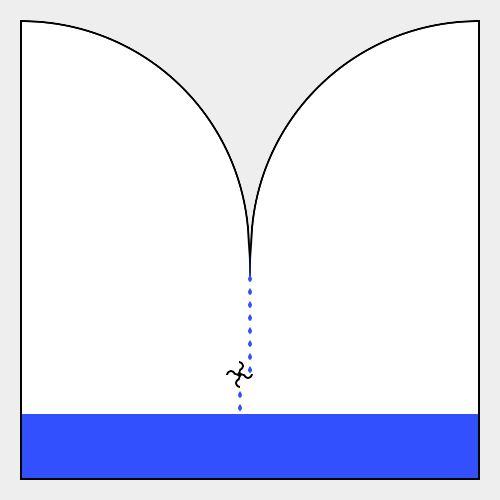 As far as I understand, the water should be in an equilibrium between its liquid and gaseous phases. While some of the liquid water at the bottom continuously evaporates due to vapor pressure, some of the water vapour molecules will cluster into droplets, causing condensation. Solid surfaces --such as the ceiling and walls of this system-- are likely sites for this condensation because they reduce the energy barrier that needs to be overcome for this nucleation to take place.

However, when I try to bring gravity into the equation, I'm struck by what seems to me like a remarkable asymmetry. Any water droplets condensed against the ceiling of the container have greater potential gravitational energy than the liquid molecules at the bottom. The stalactite-esque spire protruding from the ceiling takes advantage of water's surface tension to direct a trickle of water onto a tiny waterwheel below, powering a tiny turbine.

Going in the other direction, any evaporated water molecules that end up condensed against the ceiling seem to do so without any input of external energy. Gas molecules will travel in any direction throughout a container, spontaneously reaching the upper regions merely through their own energetic brownian motions, trading heat for gravitational energy if you will; while apparently decreasing entropy of the entire system over time, violating the 2nd law of thermodynamics while summoning Maxwell's Demon.

That can't be right, right?

NB: It deserves mention that condensation produces heat, whereas evaporation consumes heat. The resulting temperature differences should remain constant though, given that convection and conduction would keep the system in thermodynamic equilibrium between the sites of evaporation and condensation. Using thermally conductive materials in-between top and bottom (e.g. copper container walls) is just one measure that can be taken to minimize the temperature difference of this equilibrium.

At a given temperature, in your liquid water-air system, equal numbers of water molecules will enter the air from the liquid as return to the liquid from the air. The system will be in equilibrium and the air will be "saturated" with water vapor.

There are two ways that condensation will form on your ceiling. If the air is supersaturated with water then your "nucleation" sites will facilitate condensation. But conditions in this system are not those that would result in supersaturation. The second way for condensation to occur is for the ceiling to be colder than the air.

If condensation occurs on the ceiling, much of the latent heat of condensation will be transferred to the ceiling therefore warming it. To continue the condensation process, you will have to keep the ceiling cool requiring expenditures of energy from outside the system. Your system is closed but it is not isolated in thermodynamic speak.

Furthermore, as the condensing water loses heat to the ceiling, the system cools. This will result in a lowered equilibrium vapor pressure, that is, less water in the vapor state. To make matters worse, the lower temperature of your system will require an even greater lowering of the ceiling's temperature to maintain condensation.

As far a entropy, you must, in addition to events within your system, consider those happening outside to power the refrigeration process.

Hopefully you understand the turbine you may be running inside the system won't even come close to powering the refrigerator outside!

this is the second law :

The second law of thermodynamics states that the total entropy of an isolated system always increases over time, or remains constant in ideal cases where the system is in a steady state or undergoing a reversible process.

In reality creating an isolated system is an approximate process, one has to assume that external to the system conditions do not affect the system. In the statement of your question you already have opened the system to gravity, so it is not a closed system and the force of the second law does not apply.

This can be understood in the statistical formulation of entropy

[This definition] describes the entropy as being proportional to the natural logarithm of the number of possible microscopic configurations of the individual atoms and molecules of the system (microstates) which could give rise to the observed macroscopic state (macrostate) of the system. The constant of proportionality is the Boltzmann constant.Specifically, entropy is a logarithmic measure of the number of states with significant probability of being occupied

Intoducing gravity into the problem introduces gravitons, the carriers of gravitational waves, and each gravitational interaction of a graviton with a putative drop generates extra microstates. As these come from the mass of the earth the system by construction is not isolated so that the second law does not apply.

Now for the content of the question: at best , if it is true that condensation can happen at a fixed temperature with special materials, as you state in a comment to bpedit, you are transforming thermal energy to gravitational energy to kinetic energy, and it might go on for a long time like those birds drinking water perpetually, until dissipation stops them. Dissipation would be the cooling from removing the tails of the distribution, and also the black body radiation cooling the system .

The distributions of kinetic energy of the water and of the vapor over it have long tails. It is the molecules from the tails that evaporate from the water and allow the droplets to reach the ceiling,

i.e. acquire gravitatiional potential, and form the droplets on the ceiling surface (hypothesis that this can happen at constant temperature for special materials).

So thermal energy is turned into gravitational energy which is turned into the kinetic energy of the turbine, so the temperature will fall to the point that no longer droplets can form on the ceiling. (depending on the material). If such a material does not exist,the other answers are adequate.

Think about how you could adjust the operation of your machine if you temporarily assumed it were not a closed system:

That means that somewhere between those two temperature gradients is a configuration where your machine doesn't run at all. If you set it up and leave it closed, it will eventually reach this equilibrium configuration and stop.

Now it is possible that, since gravity is involved, the equilibrium configuration isn't actually at uniform temperature. For instance, if the chamber were ten miles high, the water vapor molecules near the ceiling would have less average kinetic energy than those near the bottom, and a lower effective temperature. But, like all perpetual motion proposals, it will only run for a while at best.

Not the answer you're looking for? Browse other questions tagged thermodynamics energy-conservation phase-transition thought-experiment perpetual-motion or ask your own question.

2
Can anyone analyze this perpetual machine that a Norwegian built?
0
How can condensation be aided?

0
In evaporative cooling does the water and the air both cool down? Wouldn't that violate energy conservation?
1
Is water vapor in a metastable state at 1 atm and at room temperature?
1
Is it easier to gain energy or to lose it?
0
Help me in understanding the general principles behind evaporation and condensation of a liquid
4
Cooling effect caused by evaporation
1
Is it possible to heat up a vapour-liquid mixture until it entirely condenses into liquid?
0
Does evaporation do work on the surroundings?
1
Does the amount of water vapor air can "hold" depend on the temperature of the 'water' or the temperature of the 'air'?
1
How does boiling take place?