What is the significance of the phase constant in the Simple Harmonic Motion equation?

The displacement of a particle performing simple harmonic motion is given by $x = A \sin(\omega t + \phi)$ , where $A$ is the amplitude, $\omega$ is the frequency, $t$ is the time, and $\phi$ is the phase constant. What is the significance of $\phi$. How is it used? Please explain the meaning of the phase constant

The equation you state $$x=Asin(\omega t+\phi)$$ describes the displacement motion of a passive linear harmonic oscillator without loss. In other words there is no input or driving function. Whatever motion the oscillator exhibits is solely due to its initial conditions. $\phi$ in this case provides a point of reference in space for the oscillations.

But for the driven oscillator, $\phi$ provides a more significant role in terms of how efficiently energy is transferred from the driver to to the oscillator (system). If the driving force is in perfect phase with the system and pointing in the right direction, maximum energy is transferred at the harmonic resonant frequency. Either side of this point either leads or lags, decreasing the efficiency of energy transfer.

All the phase angle does is to give you a facility to decide on the displacement of the particle undergoing shm at time $t=0$ or any other time. 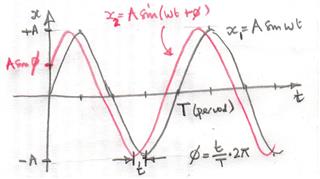 The equation of motion for a simple harmonic oscillator is

and the most general solution to this is

Note there are two constants of integration that correspond to the equation being a second order differential equation. More physically, the velocity is given by

and the two constants of integration are fixed by the configuration of the system at any given time. Said differently, if you know the position and velocity at time $t_0$ you can solve for $A_1$ and $A_2$. You should do that as an exercise.

Now note that the expression you have can be written as

In the basic SHM equation, you get x=Asin(ωt) where at t=0, the object is at mean position or zero displacement. Now, what is the significance of the angle inside the sine function? It gives you the position of the particle performing SHM. When the angle is π/2, the displacement is maximum i.e A. When it is π, the displacement is once again 0. So, for the equation Asin(ωt+ϕ), it simply means that the SHM does not begin at x=0 and the position at t=0 is Asin(ϕ) (depending upon the value of ϕ it could be A,A/2 anything).

What is the significance of $\phi$?

Based on a point raised by @docscience this answer addresses the phase in terms of "initial conditions" introduced by driving forces. In fact one can think of this as answering how the SHO was set in motion in the first place.

This has been obtained by using retarded Green's function for the SHO details of which can be found elsewhere but one can check that this satisfies the SHO equation of motion.