Bernoulli's principle: Why an increase in the section area in a hose makes the pressure increase?

I'm having trouble understanding Bernoulli's principle, in particular, why an increase in the section area of a hose increases the pressure?

All the answers I read say: " In order for the energy to be conserved" or "when the tube is compressed, the fluid has to speed up so that the same amount of the fluid gets out of the tube in the same interval of time (continuity law)".

I'm not looking for the finality : energy conservation. I'm trying to understand the mechanism, what happens at the molecular level?

I'm trying to understand the mechanism, what happens at the molecular level?

Bernoulli's Principle belongs to continuum mechanics, so it's not well suited to make pronouncements about action at the molecular level (but I'll get back to that further down).

Between two points on the same flowline Bernoulli states:

The case below is for an inviscid, incompressible fluid, with no potential energy changes ($z=\mathrm{constant}$) and regularly shaped conduits (the cross sections $A_1$ and $A_2$ are well defined): 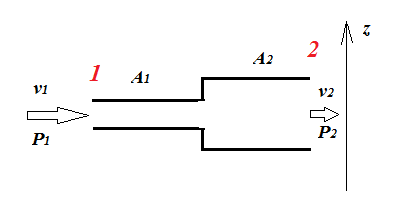 The relationship between the flow speeds is given by incompressible continuity:

So what you call the 'mechanism' is entirely due to satisfying the continuity requirement. Counter-intuitively perhaps, here a decrease in flow speed $v$ results in an increase in pressure $P$.

At the molecular level, lower bulk fluid pressure is caused by increased average distances between molecules, as these increases decrease Coulombic repulsions between the electron clouds that make up the fluid's molecules. This results in lower numbers of collisions with the counduit's wall and thus lower pressure.

Your quest for a "mechanism" is almost sure to fail as you are talking about how an Avogadro number of molecules interact with each other. That is precisely why macroscopic quantities like energy and density (in the continuity equation) are used.

However, we can still try to get some intuition more than just saying energy is conserved (I will still use it though) for the case of ideal gas.

The point is pressure come from force per unit area from random motion of molecules. When the fluid has to (continuity equation) pass through a narrow tube, it has to increase its velocity in a certain direction (i.e. the tube direction) and then since energy has to be conserved, assuming 'thermalization' happens at time scales much faster than it takes to pass through the tube, the fraction of energy available for 'random' kinetic energy and thus pressure, is less.

If you prefer mathematical expressions, for $N \gg 1$ molecules of unit mass, the total energy (ignoring potential energies from bound states and walls of container) is

Not the answer you're looking for? Browse other questions tagged fluid-dynamics continuum-mechanics fluid-statics bernoulli-equation or ask your own question.