How can a wooden spoon be used to prevent water from over boiling?

This is an image I found via StumbleUpon 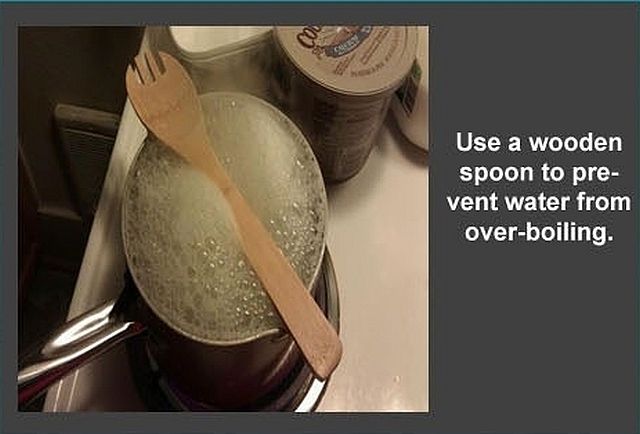 Does this actually work? If so, why?

An obvious example of a surface active agent creating a foam is bubble bath, which typically contains the surfactant sodium lauryl ether sulphate. SLES is a synthetic compound, but many foods contain natural surfactants like lipids and proteins. This is why boiling pasta creates a foam - if you tried boiling distilled water you would find that it does not foam.

So what then is the role of the spoon. Well it does two things:

Firstly remember that the foam is thermodynamically unstable, so if you can puncture the bubble wall the bubble will collapse just like a burst balloon. Typically foam bubbles can be punctured by touching them with something hydrophobic. Automatic washing powders include silicone oil (typically dispersed onto silica) to burst the foam and stop your automatic washing machine from foaming at the mouth. Lab demonstrations usually demonstrate the effect using PTFE powder. The mechanism of the bubble bursting is simply that the water contact angle on a hydrophobic surface is very large so the water retreats from the contact.

So if the surface of your spoon is hydrophobic it will burst any bubbles that touch it. However if whatever you're boiling has a powerful surfactant the surfactant will simply adsorb onto the wooden spoon and render it hydrophilic, and the bubbles will stop bursting. So how well the spoon bursts bubbles depends on the spoon and on what you're boiling.

The second mechanism is a lot simpler. In the foam from boiling water the bubbles are filled with steam, not air, and if the bubble touches anything that is below 100C the steam will immediately condense and this bursts the bubble. You can see this effect by blowing on the boiling foam. Assuming your breath is colder than 100C you'll see the foam retreat.

So the wooden spoon will burst bubbles simply by being cold (or at least colder than 100C). But of course the spoon is above a pan of boiling water so it will eventually heat up and stop bursting the bubbles. Once again the spoon may or may not have a big effect depending on how fast it heats up. Allegedly metal spoons don't work because they heat up too fast, though I must admit I've never tested this myself.

It pops the bubbles. Any sort spoon (long enough) would work as well.

2
Stopping overflow of boiling milk
1
Why put something in the middle of the pan would prevent soup coming out during cooking?
6
What causes the milk to suddenly rise up & spill out if not stopped?

4
Why can't I evaporate water without wind, just heat? (not boiling,evaporating!) Or can I?
2
Heat Losses from water pan due to vaporisation before boiling
0
How does non-useful work manifest in this irreversible example?
0
Will a vinegar and water mixture prevent ice from forming?
0
What kind of ideal gas process a positively sloped line in a $pV$-diagram represents?
4
How can work be generated from quantum correlations?
0
Why is it possible to raise the temperature of water over the boiling point?
0
Less loss of energy in reversible process
2
Can a pool of water be used to reflect heat from light?