As I understand it, the Large Hadron Collider's function is to throw particles into each other while avoiding hitting the nucleus?

If quantum mechanics dictate the position of a particle can only ever be an educated guess how accurate or reliable is the collider's standard results for a successful observation? Does it miss more than it hits?

What happens if the nuclei collide, would their impact result in a nasty reaction that would destroy the collider at the least?

I can go on, has it ever done so and what was the effect?

Most of the time, the LHC is focusing opposite traveling bunches of protons, in a vacuum so as to avoid undesired collisions with nuclei, together at the various detector locations. No nucleus is involved unless the LHC is colliding heavy ions in which case, the ion nuclei collide and produce amazing images but no damage to the collider. 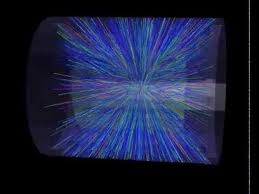 According to one LHC FAQ:

When the bunches cross, there will be only about 20 collisions among 200 billion particles. However, bunches will cross about 30 million times per second, so the LHC will generate up to 600 million collisions per second.

No. In the nuclei are the quarks and trust me, we want to beat the crap out of them (the quarks) with as many direct hits as possible.

As far as the uncertainty principal goes, its doesn't forbid you from creating states that still have very small uncertainty in space and momentum. In the case of the LHC the wavefunction of the protons is still fairly localized to a small peak that they send around the collider, outside of which there is a negligibly small chance of detecting the proton. So just because the proton is quantum mechanical doesn't mean there is an equal chance of detecting it anywhere in Geneva.

The nuclei collide all the time and the collider is still here. More importantly there is much higher energy processes happening all the time in the universe for a long time and we are still here.

Not the answer you're looking for? Browse other questions tagged quantum-mechanics particle-physics large-hadron-collider or ask your own question.