What does black hole formation and evaporation actually look like as viewed from far away?

Many people on Physics SE (myself included) have been confused about what black hole formation and evaporation look like when viewed from far away. For example:

Does any particle ever reach any singularity inside the black hole?

Can black holes form in a finite amount of time?

From where (in space-time) does Hawking radiation originate?

How does the evaporation of a black hole look for a distant observer?

This confusion all arises from the same place: the apparent contradiction between (a) the fact that a Schwarzchild event horizon lies in a faraway observer's infinite future, so from her perspective infalling matter takes an infinite amount of time to actually hit the black hole, and (b) the following naive chronological sequence:

The unifying question is, how can a faraway observer observe all six of these developments in sequence, when the first one takes place in her infinite future?

In principle, this question can be mostly or completely answered by studying this Penrose diagram that I stole from Nathaniel: 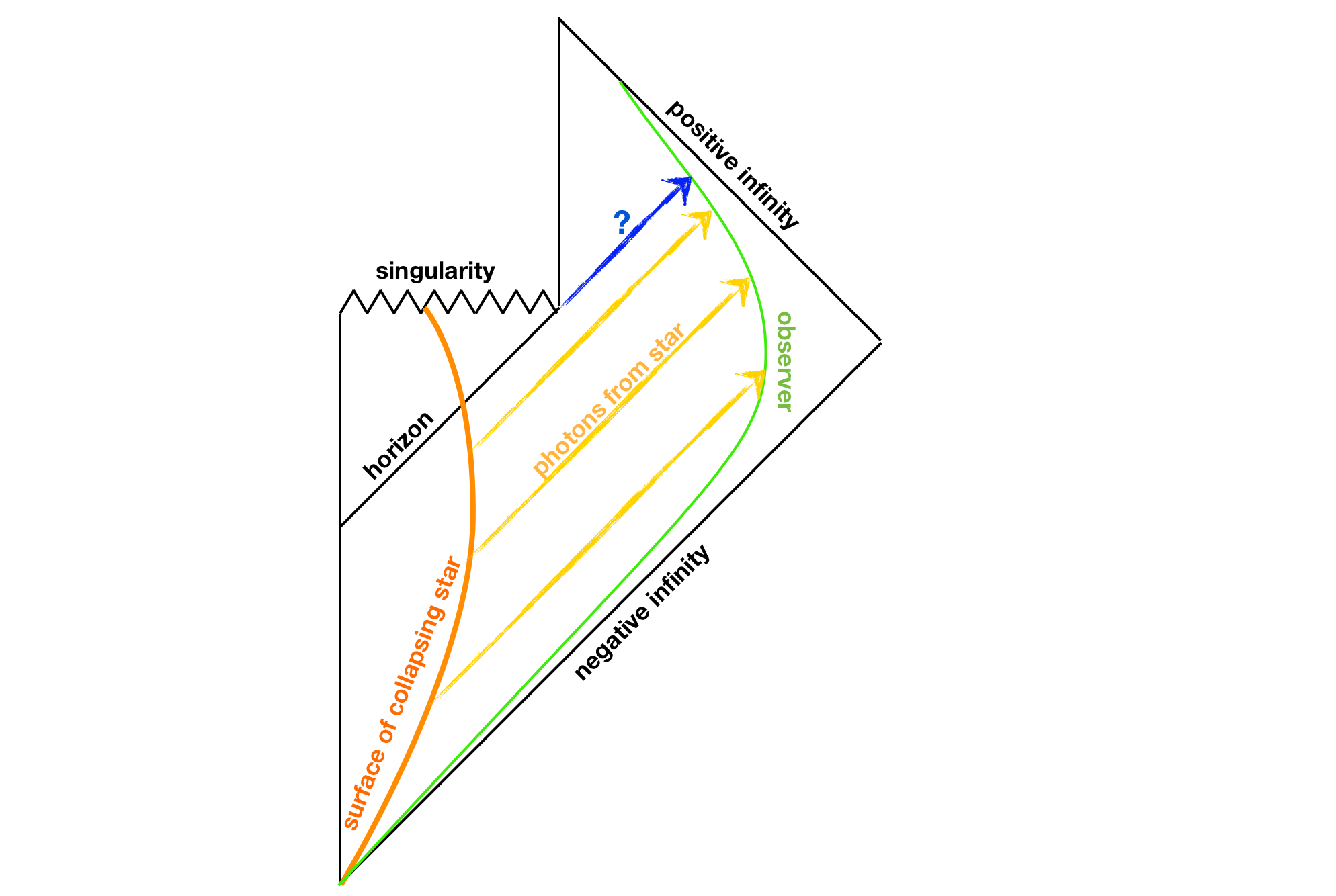 Unfortunately, my intuitive understanding of Penrose diagrams isn't great, what with their mixing up and rescaling of the asymptotic space and time coordinates. I think that for a situation this subtle, a picture or video is worth a thousand words. Therefore, I (and I think many other SE users) would be eternally grateful, and I think many misconceptions would be cleared up, if someone could create a simple qualitative video visualization which translates this Penrose diagram into the perspective of a faraway observer (specifically, an observer following a timelike geodesic at such large asymptotic Schwarzchild $r$ coordinate that this $r$ coordinate changes negligibly over her perspective of the black hole's entire lifetime).

I'm thinking it would look something like this: a bunch of blue dots (representing matter) initially drifting inward, appearing to get "stuck" just outside of a growing black circle representing the absolute and/or apparent horizon, then yellow dots/rays representing Hawking radiation moving outward from just outside the horizon and passing the blue does, the black circle and its surrounding "layer" of blue dots shrinking, and the blue dots and black circle all finally collapsing to a point and sending out a big shower of yellow dots/rays. However, please correct any details of my mental picture that are incorrect (and feel free to change the suggested color scheme :-) ). Please feel to speed up or slow down the time scales for visual clarity (since I suspect a realistic black hole would just sit around for a few eons and then appear to vanish in a comparative instant), but please preserve the chronological ordering of observed events. Also, assume that the observer can detect arbitrarily low-frequency radiation, to overcome the huge redshift from matter very close to the apparent horizon. Thanks!

(PS To forestall the inevitable comments: yes, I'm fully aware that from the perspective of an observer falling into a black hole, crossing the horizon only takes finite proper time, and that he does not locally observe anything unusual as he does so.)

Edit: To clarify, I'm certainly not asking anyone to do a simulation of black hole collapse under realistic assumptions about the stress-tensor, or anything like that - just to take the the Penrose diagram above and figure out the conformal mapping that turns it back into the ordinary Schwarzchild coordinates. Not necessarily even mathematically precisely, just qualitatively would work.

Browse other questions tagged or ask your own question.