How fast does a wavefunction vanish at infinity?

Very interesting question! I'll start by outlining some of the mathematical basics for this question:

So from this argumentation, the answer to your question is almost no for potentials which are monotone far outside. By "almost", I mean that there may be such functions at distinguished, but physically irrelevant values of $E$, for example, consider the potential $$ V(x)=\frac{2-6x^2}{(1+x^2)^2} $$which looks like this: 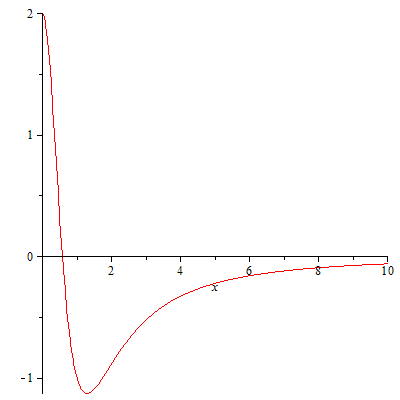 You may now check that $\psi(x)=\frac{2}{\sqrt{\pi}}\frac{1}{1+x^2}$ is a normalized eigenfunction to this potential with eigenvalue 0. The momentum operator is well-defined for this $\psi$ and $\psi$ obviously decays only polynomially for $x\rightarrow\infty$. So, what happened here? If you try to use the "box" argument, you would compare to a box which is completely negative away from the origin (remember, the box estimates the potential from below), so 0 is already a scattering state for the box! However, looking at the potential, you see that this can only be the case for this exact value of $E$ - for even an $\epsilon$ more energy, you will obtain a scattering state since $V\rightarrow 0$ for $x\rightarrow \infty$; and for an $\epsilon$ less, you will get a bound state you can again estimate by a box, hence it decays exponentially. Since you can't prepare a state with an exact energy, this is not physically relevant. Generally speaking, this phenomenon should only occur at $E=\limsup_{|x|\rightarrow\infty}V(x)$, since this will correspond to the lowest possible energy for scattering states.

So, what can happen if we drop the "monotonicity-far-outside"-condition? I think that in this case, it should be possible to obtain the kind of states you are searching for. My attempt on the construction goes as follows: Let $V$ be a collection of box potentials where the boxes have constant height and grow thinner as $x$ gets bigger, e.g. something that looks vaguely like this: 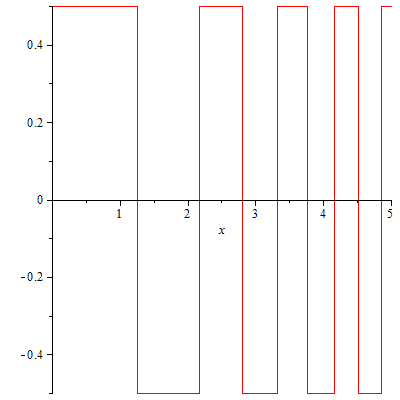 If the infinitely many discontinuities bother you, the behavior I'll describe should be exactly the same for a smoothed version of this potential.

Now, a bound state of this potential would oscillate around $0$ where $V=-0.5$ and decay where $V=+0.5$. The (exponential) decay rate where $V=0.5$ is always the same, by controlling the width of the boxes, you can exactly control how fast your bound state decays, e.g. you can achieve, that each time you pass the positive part of the box, your amplitude goes down at the rate $1/x^2$. The details are probably very technical and fishy, but I think in principle this should work.

Not the answer you're looking for? Browse other questions tagged quantum-mechanics wavefunction schroedinger-equation boundary-conditions or ask your own question.