Dependence of fluid pressure being on height and not mass

Fluid pressure is calculated as

where $\rho$ is fluid pressure, $h$ is depth from surface, $d$ is density of fluid and $g$ is acceleration of gravity.

It used to make sense to me for square or rectangle shaped containers since pressure means force per unit area.

One big obvious mistake I made was to assume that all containers would be squares or rectangles. So, now I can't wrap my mind around the concept that pressures on tennis balls in the following image are equal. 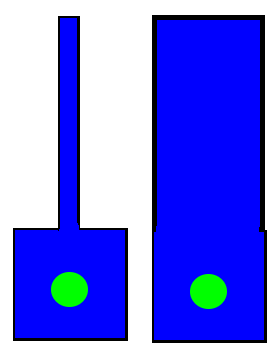 Why are they equal when the weight (and mass) of fluid above them is obviously different?

What you have ignored is the effect of the container walls.
The liquid is in equilibrium each particle has no net force on it.

So your analysis failed to include the contribution to the force due to the container wall.

Make a hole in the wall and the force due to the wall ceases to exist and liquid comes out of the hole.

Let us consider the picture you provided(remove the tennis balls,they're useless here), and at a certain depth $h$ from the free surface of both tanks, connect them by another pipe as shown.

NOTE:both the free surfaces of the tanks are at the same distance from the pipe,which is horizontal.

If possible, let us assume that the pressures at the given depth $h$ is different in the tanks. Then water would flow from the right to the left(under the assumption that greater mass implies greater pressure). Also assume after transportation, no water is spilled over the brim of the tanks. Now, at equilibrium the horizontal pipe is at a distance of $h_1$ from the free surface of left tank and at $h_2$ from free surface of right tank($h_1 > h_2$). Consider a infinitesimally small fluid cube A of side $dh$ in the left tank, at the same level as the pipe. Let the force here be $\vec F = F_x + F_y + F_z $.

Clearly under equlibrium(taking z axis to be vertical):

But this means that the pressures are not equal at the same depth in the left and right tanks, and neither are the forces on the fluid elements. Thus, there will be further flow to attain equilibrium, net force on the fluid elements should be zero. This contradicts the assumption that equilibrium had been reached at $h_2$ and $h_1$. Hence, our primary assumption must also be false. i.e: there cannot be any water flow when we initially connect the pipes. Thus the pressures must also be equal at the same depth, whatever the shape of the tank.

6
Why don't forces on two surfaces of a fluid need to balance?
0
Force due to pressure on side of box versus weight of fluid inside box
5
Fluid mechanics paradox: The force needed to 'balance' a fluid using a piston
1
Why does the height of an object matter in a fluid?
4
Why does pressure vary with depth in a fluid at microscopic level?
2
Why is pressure on object in fluid dependent on height of water column above it whereas the *force* on object is not?