Let's consider 'up' to be a vector field, supposed to match our intuition about which way we fall. Intuitively, on a daily basis, we have some idea of which way 'up' is. Near the surface of the Earth, it would be a direction that points away from the center of the Earth. Nearer to another planet, the direction 'up' should be pointing away from its center of mass as well.

In Newtonian physics, if I were naive, I would define the direction of 'up' to oppose that of the gravitational field, however upon more inspection, this doesn't capture the local notion that one would want. If one considers a star system with planets, the gravitational field could point nearly directly towards the star everywhere throughout the planet, even if this direction is what we would like to call 'up'. The intuitive direction of up here is given by opposing the difference between the forces on the observer and their nearby planet. This is obviously relative to the choice to make the planet somehow primary over the star. I don't know a way to remove this choice and have a universal definition that matches intuition.

General relativity makes this even more complicated by introducing the geometry of spacetime. In Newtonian physics, the direction of the future in its spacetime is clear and universal. Now here I believe that there is still a perfectly valid definition of 'the future direction', but only for any particular observer, namely the direction of their 4-velocity. This in turn prescribes, even for non-globally hyperbolic spacetimes, a spatial subspace of the tangent space at any particular point along the worldline of an observer. Unlike in Newton's theory, gravity is not like forces, as falling is ultimately inertial motion in curved spacetime, so when we stand on the Earth's surface, up matches the spatial projection of the force acting on us, to accelerate us out of our inertial freefall through the surface. Is there any way to define similarly a direction 'up', local to any particular observer, given the geometry of the spacetime? Or is the direction of 'up' dependent on the overall force acting on an otherwise inertial observer? The disadvantage of this is that it becomes essentially impossible to say which way is up, the second you leave the surface.

Apologies if this seems insignificant and nitpicky, it's just a curiosity I'd like to understand. Thanks in advance.

Have you ever been free floating while scuba diving 300 feet under the surface, and rolled around some? Definitely you don't know what's up or down. It's always wrt a reference frame.

And no, up means nothing for an observer, until he/she defines a coordinate frame.

BUT the same is not true for future and past. It is not the direction of their four velocity, just that of the zeroth or time coordinate of the four velocity. And because of the covariance of Relativity, his future is also well defined - it's anything possible inside his future light cone. If he changes coordinate frames, light cone boundaries map to light cone boundaries. That is what relativistic invariance means, and gives everybody the same local speed of light.

The only issue with future is that there is a symmetry between past and future in all physical laws of nature, but somehow we go to the future not the past. Thousands of articles and books on this. Why or why not would be a separate question, I'm sure already asked and answered on this site.

Intuition typically only works in environments you have experienced.

Defining "up" to be the direction opposite to the gravitational field will work in every environment where your intuitive concept of "up" applies. If you are on the surface of a planet, up will be where you expect it to be.

If you are out in space, the definition of "up" isn't as meaningful. For one thing, you have to consider Lagrange points where the total force of gravity is zero. Any definition of up there is degenerate.

In zero gravity, up and down are very relative concepts. In the book Ender's Game, Ender famously reorients his concept of up and down in his zero gravity war simulator by declaring "The enemy's gate is down." And then it was... simply by making that declaration.

In the real world, we can consider the ISS. The ISS is actually carefully constructed to have an up and a down in most modules. The direction is technically arbitrary, but they try to keep it consistent because the ISS contains humans who have spent almost their entire life planetside.

Interestingly, in the cupola, where they view the Earth, "up" points towards Earth. This is the opposite of what you might think if you just follow the gravitational fields affecting the orbiting ISS. However, it is remarkably intuitive for someone looking to take pictures of the Earth: 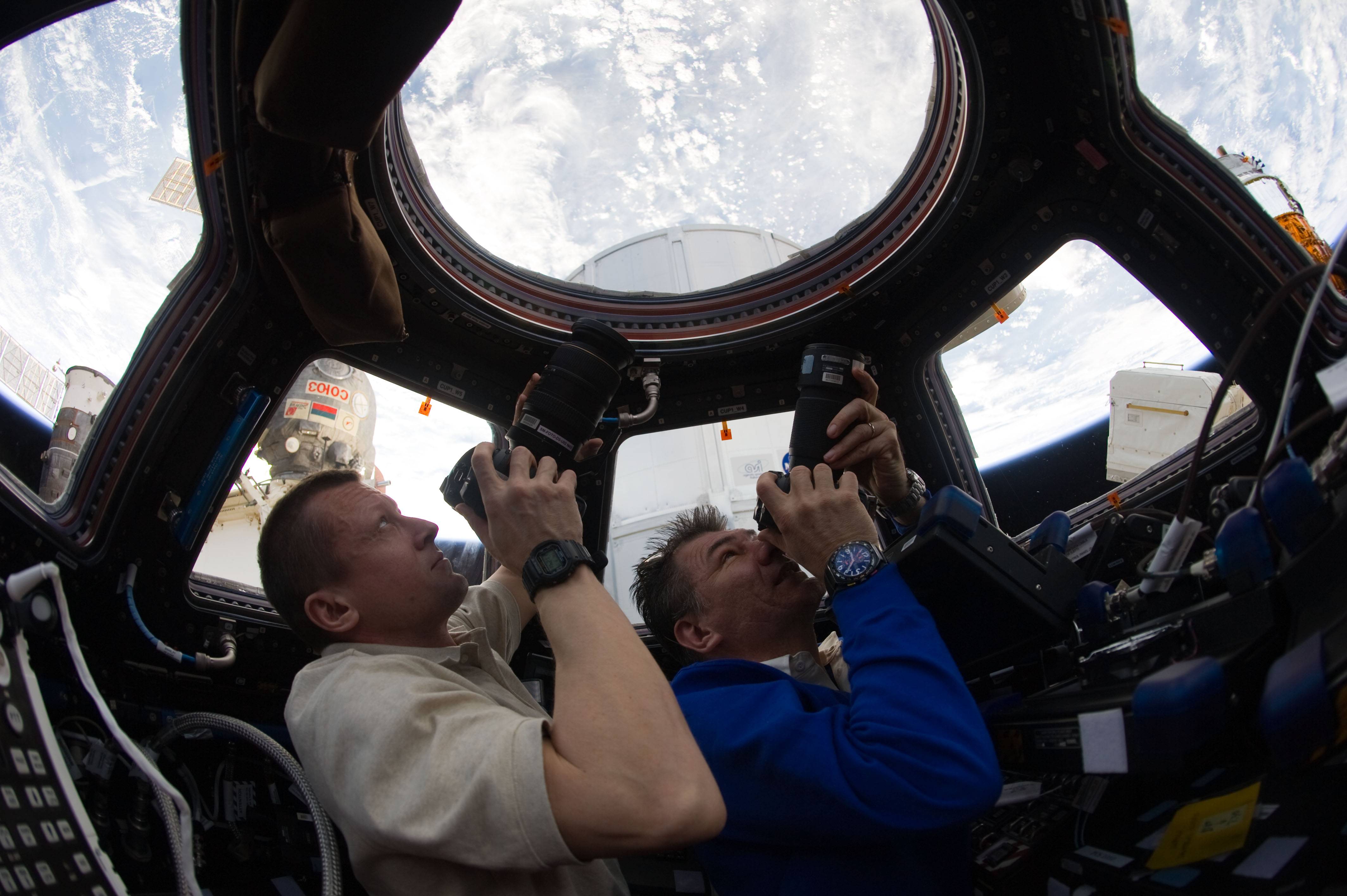 Not the answer you're looking for? Browse other questions tagged general-relativity gravity relativity or ask your own question.

2
Inertial frames of reference
0
Why does the motion of the planet around a star cause a centrifugal force?
1
Does curved spacetime arise from inhomogeneity of gravitational field?
1
Confirmation of a concept under General Relativity and Frames of Reference
8
Physical meaning of frames in general relativity
1
Definition of trapped surface
1
On local inertial frame and acceleration in general relativity