What happens in an empty microwave oven?

What it we don't put any food in a microwave oven? I.e. nothing to absorb the microwaves?

Would the standing microwave modes in the 3D cavity be reinforced? Would there be too much energy in the microwave?

This is what happens when you run it without a load. At first, everything is fine because the cavity, the door, the tray (or shelf) absorb the excess energy. Things will start to get hot, but it's not critical yet. After a few minutes, something will start to get really hot and the excess energy? It starts reflecting back into the magnetron (the device that provides the microwave energy) and that starts to heat up too. If it is designed well enough, it will trip a thermal fuse before anything actually breaks. The thermal fuse can be resettable, but usually not. You will need to replace this fuse if the oven no longer works.

If the oven is designed poorly, you'll experience what is called "thermal runaway". At this point, some random location in the oven will begin to superheat. And by super heat, I mean hot enough to liquefy porcelain. This will continue until something finally gives out. It could be a breaker tripping, a standard fuse blowing, or in the worst case, the insulation on the wiring or the plastic components might literally burst into flames consuming everything flammable until the oven finally loses power.

Don't do this. Some ovens should not be operated when empty. Refer to the instruction manual for your oven. I would not ignore this instruction, issued by the FDA.

Also you would be wasting money, and I would guess there is some kind of limiter built in as hyportnex says, BUT it's not worth the risk.

But you could do this experiment instead, and eat the results. 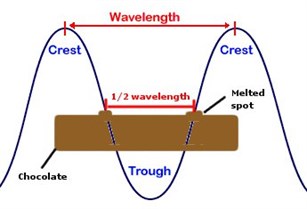 Use a bar of chocolate to check that the speed of light is 300,000 km/s, rather than let all that energy go to waste.

Apologies if you know this already.

Measure the distance between the melted spots, after they have formed and then double it to get the wavelength of the microwave radiation. The wave frequency is around 2.45 gigahertz.

The distance between each melted spot should be around 6 cm.

Re: chocolate experiment and microwaves.

All the microwave ovens I have ever come across, dismantled or repaired have always included a "stirrer" which is in the waveguide path between the magnetron and the oven cavity. Usually it is in the form of a metal rotating shape like a fan. This chops up the otherwise nicely formed e-m microwaves into a jumble and hence there can be virtually no standing waves inside the oven. The reason for this is simple. To ensure that your chocolate is NOT melted/vaporized in little spots but heated evenly. Pretty well all the owners of microwave ovens I know prefer evenly heated food as opposed to generally still frozen food with black burnt blobs in it.

Not the answer you're looking for? Browse other questions tagged everyday-life microwaves or ask your own question.