I am currently working through Griffiths' Introductory to Elementary Particle Physics and I'm a little confused about a particle's spin/flavor wavefunctions. As a specific example, I've attached Griffths solution to the proton's wavefunction, and the formula he used to get it. 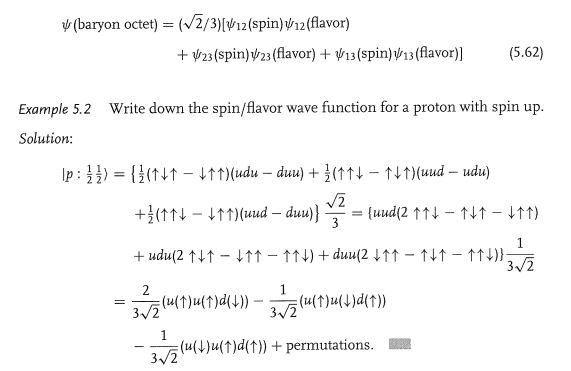 I understand the solution, but what confuses me is the ordering for the antisymmetric spins/flavors. As an example, looking at the first term, wouldn't the flavors still be antisymmetric in particles 1 and 2 if we just switched the udu and duu terms. We would get a different final solution for the wavefunction now due to terms cancelling out after expanding.

So the real question you're asking is, why do we have to match these terms? And that's a good question and it has to do with how the 3 terms all play together (a sign flip on any individual term does nothing for consistency or inconsistency).

So the expression takes the form of "we're going to insert some $u_\uparrow$ state into the twice-antisymmetrized 2-quark state $$d_\downarrow u_\uparrow - d_\uparrow u_\downarrow - u_\downarrow d_\uparrow + u_\uparrow d_\downarrow,$$because we know we have two $\uparrow$ spins and two $u$ quarks and so one of these up-quarks has to be in the spin-up state." (Note that under $1^\text{st}\leftrightarrow2^\text{nd}$ interchange the above is in fact symmetric, that last term being exactly the first term with the two particles switching places.) Now the expression chooses to symmetrically insert this $u_\uparrow$ quark in the first position, the second position, and the third position, so that the result will still be symmetric here and will become antisymmetric after correcting for color charge.

What you're proposing by flipping the sign of the first term, therefore, is not symmetrically inserting this $u_\uparrow$ quark in each of the three spots, but inserting it in the first place with a 180-degree phase shift. And that naturally will not be properly symmetric here or antisymmetric afterwards.

The full symmetry of the above wavefunction is an illustration of the appeal that the (Gürsey-Radicati-Sakita, 1964) flavor-spin SU(6) has among workers in the field: this is just a component of the 56 irrep of this "auxiliary group", which is a fully symmetric representation, in sharp contrast with the representations of spin SU(2), flavor SU(3), and its particular subgroup SU(2) (isospin). See below.

Your possible confusion is underlain by the messiness of the various pieces, which sudoku-like, conspired to yield this simple answer, which might illustrate for you the transformative mystique this structure had in the field half a century ago when Gell-Mann revealed it to the world... there was method in its madness, and thought about in the right language, it made sense, but not the way it was anticipated for several decades.

What actually happens is that the wavefunction is of mixed symmetry in spin space and flavor space (eightfold way or isopspin, here), all the while being symmetric in the combination of these two. In fact, the respective component reps are reducible (but as you saw above, they conspire to produce pieces of the simple irreducible rep above---this is the point of generalization, the "grand synthesis as MGM used to put it.)

Specifically, when you look at the 1-2 particle interchanges in (5.62), $\psi_{12}$(spin) is antisymmetric (a spin singlet composed with a spin doublet for the 3rd quark); but it is multiplied by a flavor antisymmetric $\psi_{12}$(isopin) to yield an interchange symmetric piece.

There is no freedom to adjust signs among the various components all the while maintaining the complete symmetry among 1,2, & 3.

Side remark (formal nitpick): Since no strange quarks are involved, the subgroup of SU(6) in question is actually merely SU(4) (Wigner 1937), in whose symmetric 20 representation the above proton wavefunction also belongs. Under the spin x isospin subgroup of it, $SU(2)\times SU(2)$, ${\mathbf 20}=({\mathbf 2},{\mathbf 2})\oplus({\mathbf 4},{\mathbf 4}) $, where the first term is the proton-neutron isodoublet, spin-doublet, one of whose 4 states this wavefunction represents; and the second is the Δ baryon, spin-quartet isoquartet in the eightfold way baryon decuplet.

Not the answer you're looking for? Browse other questions tagged particle-physics wavefunction standard-model quarks protons or ask your own question.

9
How do I know the proton isn't made of 3 anti-down quarks?
1
What makes the quarks stay inside the proton?
104
What's inside a proton?
3
Wavefunction of a Baryon
2
Connection between singlet, triplet two-electron states and the Slater determinant
5
Why do we antisymmetrize the baryon's wavefunction but not the meson's?
2
Where is the proton mass coming from?
2
Symmetrisation of (fermionic) two-particle system without vs. with spin in wave function