Why the intermolecular force can be attractive and repulsive?

As we all known, the fundamental force between objects (such as Gravitation Force, Coulomb Force) can be either attractive or repulsive. But I am curious about the intermolecular force

can be both attractive and repulsive depend on the relative distance between molecules(illustrated by the following figure)? 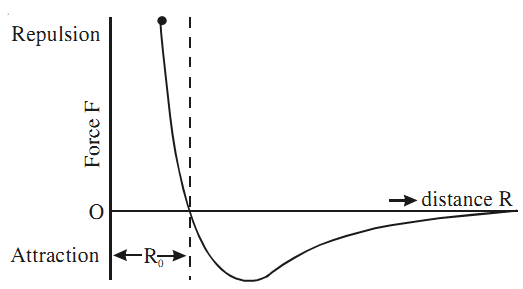 Why the distance between molecules can mediate the symbols (minus for attractive and plus for repulsive) of force? How does one can explain this curve occurs just from the fundamental force? (in which I think there exists only the Coulomb' force, of course, it can be attractive or repulsive.)

But why do we expect such behaviour? Even though an atom or a molecule is electrically neutral overall, the charge might be distributed unevenly (you can think of it as having a positively charged and a negatively charged part). This uneven distribution may be due to quantum fluctuations for atoms, or to the molecular structure for molecules. Anyways, it gives rise to a dipole moment, usually called $p$, which in turn produces an electric field $E \propto p/r^3$. Now, this field will induce a dipole moment $p'$ in another molecule so that $p' \propto E \propto p/r^3$. The potential energy of two dipoles scales like $p p' /r^3$ therefore giving rise to the $1/r^6$ potential.

On the other hand, when two atoms come really close together, two things happen: first of all, the subatomic structure becomes relevant, for instance in the form of electrons in the outer shells repelling each other; another effect which will be relevant is the Pauli exclusion principle, which roughly speaking in this case prevents two particles from occupying the same space. The reason why we pick $12$ as the exponent is probably due to convenience for calculations more than any other physical reason.

This is actually a question of interaction of atoms Let consider two atoms both at infinity ... here we consider that there is no interactive force

Not the answer you're looking for? Browse other questions tagged forces molecules or ask your own question.

19
In the Lennard-Jones potential, why does the attractive part (dispersion) have an $r^{-6}$ dependence?

1
What is the "truth" of the electrostatic force?
0
Why hot molecules have higher velocities
7
Does the weak force have an attractive/repulsive force observable in everyday life like the other forces?
1
Why are attractive and repulsive forces symmetrical?
1
Forces during the formation of hydrogen molecules
0
Spin and force carrying bosons
1
Why doesn't the state of matter oscillates between solid , liquid and gaseous phase?
0
Strength of intermolecular forces as a function of distance