How does covalent bonding actually work?

I understand that the octet rule works for a single atom, because (e.g.) the $3s$ state is much higher in energy than the $2p$ state. However, I'm not sure how this applies to a two-atom molecule. There are two ways to explain it:

If we're naive and say that the electron quantum states of $O_2$ are just the states of the original two oxygen molecules, then it's impossible to fill all of the $1s$, $2s$, and $2p$ states because there just aren't enough electrons. In chemistry class, we get around this by "double counting" covalently bonded electrons -- somehow, they can count as valence electrons on two atoms at once. But how can a single electron be in two quantum states at once?

Less naively, we could say that the $O_2$ orbitals are made by combining the individual atomic orbitals of the oxygen atoms together. However, in this case, the octet rule doesn't make sense to me, because the molecule orbitals look completely different. In this picture, how does the octet rule picture of a "completely filled shell" survive?

In physical chemistry, this problem is usually treated in MO-LCAO theory.

Stated this, you can calculate the coefficients of the linear combination and the energy of each molecular orbital. What you get is a certain number of levels (same number of the atomic orbitals considered in your basis set) ordered by their energy. You can now distinguish between three types of molecular orbitals:

You can distinguish (at a very basic level) between them by representing the atomic orbitals involved and their sign in the region between the atoms: if they have the same sign, they are bonding, else they are antibonding. (Please note that by doing this I forget about the magnitude of the coefficient, that should be relevant in most cases.)

Now you have a sort of "ladder" of molecular orbitals and you know if each step is bonding or not. You can now put the electrons (same number as the sum of the electrons that where in the atomic orbitals you used in your basis set) as you did for isolated atoms: from bottom to top, two electrons in each level, antiparallel spin, and so on (the same rules also if you have more levels at the same energy).

In fact, consider the valence shell of oxygen. It is made by the atomic orbitals $2s$, $2p_x$, $2p_y$, $2p_z$ and it contains six electrons. By combining these (and ignoring the interaction between $2s$ and $2p_z$, that could be possible and that only modifies the energy of these molecular orbitals) you get $4\times 2$ molecular orbitals (the apex * means that they are antibonding). 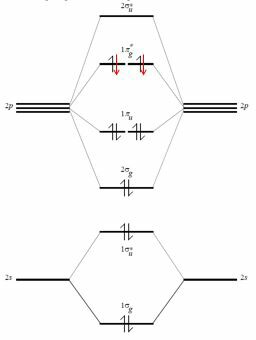 The electrons for oxygen are black (red ones are added when considering the F$_2$ molecule).

The bonding molecular orbitals from a shell of this type are four, therefore the total of the bonding electrons are eight. Here comes the octet rule, but this kind of reasoning is trying to fit an empirical and wrong way of reasoning into a more powerful and quantum framework.

Please note that my answer is from a really introductory and basic point of view; things, starting from this, can become a lot more complicated.

The octet rule was proposed much before the foundations of quantum mechanics were established.

Here is an excerpt from Wikipedia:

The octet rule is a chemical rule of thumb that reflects observation that atoms of main-group elements tend to combine in such a way that each atom has eight electrons in its valence shell, giving it the same electronic configuration as a noble gas. The rule is especially applicable to carbon, nitrogen, oxygen, and the halogens, but also to metals such as sodium or magnesium.

Important points to note here are:

To put everything in nutshell, the octet rule is not correct.

How does octet rule work?

In chemistry class, we get around this by "double counting" covalently bonded electrons -- somehow, they can count as valence electrons on two atoms at once. But how can a single electron be in two quantum states at once?

The octet rule states that the atoms tend to form molecules such that they have 8 electrons in their valence shell. It does not matter if the electron is a lone pair (or a radical electron) or if it is a bonded electron; whatever type the electron maybe, it is still a part of the atom.

Why do we still use the octet rule today?

We still use the octet rule today as it is easier to understand and describes the behavior of most of the common compounds (the compounds formed by the first few elements). You wouldn't want Molecular Orbital Theory in a $10^{th}$ grade textbook, would you?

This is the latest theory which explains bond formations. JackI has given a concise and neat explanation of the Molecular Orbital Theory.

Not the answer you're looking for? Browse other questions tagged atomic-physics physical-chemistry orbitals or ask your own question.

10
What makes the difference between ionic and covalent bonds?
15
Why do covalent bonds form?
3
Quantum mechanics and atomic bonding
22
Why does the conjugated $\pi$ bond not violate the Pauli Exclusion Principle?
9
What *really* happens to atoms in chemical reactions?
6
What gives covalent bond its strength?
4
Would an $H_2O$ Molecule actually look like this 3D representation if we could see it?
1
Which atoms are orbited by shared electron?
1
Quantum mechanical description of how bonding works?