In what way is mass converted into energy in nuclear reaction?

What I have read:

So, If both the number of protons and the number of neutrons are conserved in each nuclear reaction, in what way is mass converted into energy(or vice-versa) in a nuclear reaction? Since It is only an example of mass-energy interconversion, then why don't we see the difference in mass of neutron and proton on both sides of equations. I mean mass of (what) is converted into energy. Please explain.

I am a high-school student.

Every day observations work with classical physics. If you have 1 gold coin with a mass m, 100 gold coins will have a mass 100m. All the economies of humanity work on the conservations of mass, from wheat production to oil wells mass does not change, is additive and is conserved.

Nuclear reactions were a surprise and are no longer in the framework of classical physics. One needs quantum mechanics and special relativity to really understand what is going on.

Chemists by the year 1789 , long before any special relativity and quantum mechanics appeared, discovered that they could organize the chemical elements . The periodic table of elements shows the A number , which is the atomic weight of the element, i.e. the atomic weight divided by the mass of hydrogen, and Z, the number of positive charges equal to the electron number in the nucleus. They found out that there was a binding energy per nucleon

At the nuclear level, nuclear binding energy is the energy required to disassemble a nucleus into the free, unbound neutrons and protons it is composed of. It is the energy equivalent of the mass excess, the difference between the mass number of a nucleus and its true measured mass.Nuclear binding energy derives from the nuclear force or residual strong force, which is mediated by three types of mesons. 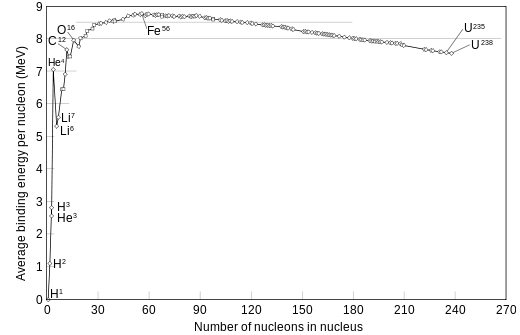 This makes sense only within the context of special relativity, where mass is not a conserved quantity.

I mean mass of (what) is converted into energy. Please explain.

The masses of (deuterium+ tritium) will be larger than the mass of Helium +neutron, because mass is not a conserved quantity at this level, it is connected directly with energy according to the special relativity equations .

The difference, 28.2960 MeV, is the binding energy. The individual mass total is greater than atomic mass of the helium, so if you could assemble these 4 pieces in one event, there would be a release of over 28 MeV of energy. You could do the same with other atoms, such as uranium-235 or carbon 12. In radioactive decay, the binding energy (or the missing mass energy) of the products is greater than the binding energy of the original atom. Some of the mass of the original atom has been converted into kinetic and electromagnetic energy and a smaller mass is left over, even though the effective charge and proton/neutron total count doesn't change. Notice that the proton count can change and the neutron count can change (beta or positron decay).

Not the answer you're looking for? Browse other questions tagged homework-and-exercises nuclear-physics mass-energy binding-energy or ask your own question.

18
Conversion of mass to energy in chemical/nuclear reactions
2
Mirror nuclei: accounting for the difference in mass between nuclei
8
Where does energy come from in a nuclear fission if nucleon count doesn't change?
2
Binding energy converted to kinetic energy/mass loss
0
How exactly does nuclear reactor work in generating energy, when the energy created from fission transformed into binding energy?
1
Nuclear binding energy and mass defect
6
What is Binding energy, actually?
0
What exactly is Binding Energy and how is Energy released in a Nuclear Fusion?
0
Potential energy, mass transformation in energy? and nuclear reactions?