Photoelectric effect current's dependence on frequency based on PhET simulation

So, I understand that the intensity should be the only factor increasing the current as the answer to a similar question (Photoelectric Effect - Dependence of current on frequency) wisely explained, assuming that the Cathode, from which the electrons are leaving, is kept at a lover or same potential as the anode. If it was the opposite case However, as far as I know and the simulator shows, current would depend on the voltage because not every released electron would reach the anode because of the braking electric field.

My actual question however is: Can anybody explain me why does the PhET simulator (http://phet.colorado.edu/en/simulation/photoelectric) show that current does depend on frequency, but not seemingly linearly. The current on a constant intensity seems to reach its peak at the wavelength of 196nm corresponding the frequency of 1,53 x 10^15 Hz, which is UV.

So my point here is that we are told that the current doesn't depend on the frequency, furthermore the amount of electrons released from cathode doesn't depend on frequency. Is there something wrong in my measurements or does the simulator take something into account that a basic school book doesn't tell? 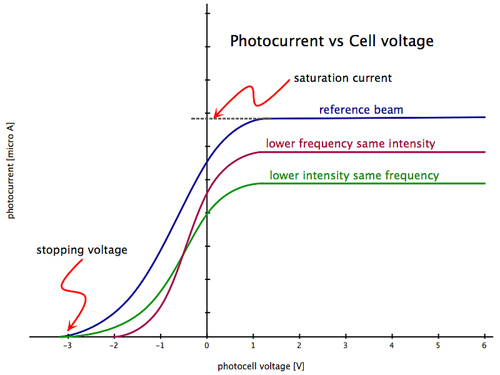 There are some tips for teachers available but if you cannot register here are the relevant three paragraphs:

The last bullet point gives you a way of finding out for the Phet simulation the average number of electrons emitted by a photon as a function of the wavelength of the photon.

The greater the frequency of the light the greater the amount of energy per photon. The threshold frequency has just barely enough energy per photon to eject electrons, and can only eject the electrons in the metal that have the highest amount of energy. (Imagine the electrons in a valance shell or the top of a valence band, although that's too simplistic as electrons are being given energy by the collisions of the atoms and being "excited" a bit.) The main thing is that photons with a higher frequency have more energy and therefore can eject electrons that were a little lower in energy as well. So these photons have a higher probability of ejecting electrons. It's like lowering a rope down from a window to pull people up. There's a minimum length that will work, but a longer rope can reach not only the tallest people but some of the shorter ones too. So the odds that each photon (rope) can "pull up" an electron goes up as the frequency and therefore energy per photon goes up.

In the simulation, with the intensity at 100% the number of photons emitted each second goes DOWN as the frequency increases. The intensity staying constant means the energy emitted per second is the same. So, since higher frequency photons have more energy each, then the number of photons being emitted each second must be less. If you go to Options and select "Control photon number instead of intensity" then the current won't drop when the frequency goes above ~196 nm. (It does seem to reach a maximum, though, and a higher frequency doesn't affect the current. I can only assume the "rope" is now so long that it's hitting the ground and so a longer rope isn't helping anyone.)

Not the answer you're looking for? Browse other questions tagged electric-current simulations frequency software photoelectric-effect or ask your own question.