I have a system with platform that has mass $m_1$ and ball with mass $m_2$, platform is connected to spring with some $k$ and damper $c$, with initial conditions of position and velocity of ball and platform. 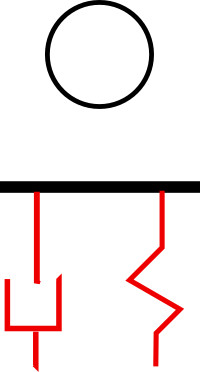 So basically I have following equation: $$ m_1\ddot{x}+c\dot{x}+kx=F(t) $$ Problem is that I have no idea how to describe $F(t)$ due to motion of platform I could not predict time that would take ball to leave it and exactly when It would bounce back to it. So I can't describe $F(t)$ as $\sin$ or $\cos$ (as harmonic forced vibration), and since this system would go for a long time it does not make problem easier. Maybe I should use energy equation? Or make some kind of series..?

I am not asking you to give exact solution, just a hint, how to approach to that problem.

Your question is very similar to Motion of a bouncing sphere with a spring attached inside.

As you have realised, the time between bounces is affected by the motion of the platform, and vice versa. If the platform is moving upwards (downwards) when the ball collides with it, the relative speed of impact is greater (lesser), so the impulse is greater (lesser), and the ball rebounds higher (lower) than before. The time between bounces therefore varies, as well as the impulse delivered during each bounce.

In general the resulting motion is chaotic. However, there will be some special cases in which the particular combinations of the values of the parameters $m_1, m_2, k, c$, and the height $h$ from which the ball is released, result in periodic motion. You could look for these by specifying that $F(t)$ is a periodic 'kick' of constant value, and finding the condition on the parameters for this to be a steady-state solution. (See notes cited below.)

However, in general it is not possible to define the force $F(t)$ because it depends on the unknown behaviour of the platform, which likewise depends on the behaviour of the ball. You cannot know the form of $F(t)$ until you have solved the equation of motion which contains $F(t)$, and you cannot solve that equation without knowing beforehand what form the function $F(t)$ takes.

I agree with Sammy that the motion is in general chaotic. This means that your answer is limited to the precision with which you know initial conditions.

Given that, the way I would solve it is as a series of exact calculations which step from bounce to bounce. That is, calculate the time of the next bounce given the current bounce. In principle, this works perfectly, but error will dominate after just a few bounces.

Not the answer you're looking for? Browse other questions tagged newtonian-mechanics classical-mechanics differential-equations vibrations or ask your own question.

4
Motion of a bouncing sphere with a spring attached inside