I have this problem from University Physics with Modern Physics (13th Edition):

The inside of an oven is at a temperature of 200 °C (392 °F). You can put your hand in the oven without injury as long as you don't touch anything. But since the air inside the oven is also at 200 °C, why isn't your hand burned just the same?

What I understood from this problem is that my hand won't be as hot as the air temperature, but then my first conjecture was: It’s the nature of the air (i.e., a gas) that its molecules are more disperse than those of a solid.

Is my reasoning right? Or what thermodynamics concepts do I need to understand better to tackle this problem?

There are two points relevant for the discussion: air itself carries a very small amount of thermal energy and it is a very poor thermal conductor.

For the first point, I think it is interesting to consider the product $\text{density} \times \text{specific heat}$, that is the amount of energy per unit volume that can be transferred for every $\text{K}$ of temperature difference. As of order of magnitudes, the specific heat is roughly comparable, but the density of air is $10^3$ times smaller than the density of a common metal; this means that for a given volume there are much less "molecules" of air that can store thermal energy than in a solid metal, and hence air has much less thermal energy and it is not enough to cause you a dangerous rise of the temperature.

The rate at which energy is transferred to your hand, that is the flow of heat from the other objects (air included) to your hand. In the same amount of time and exposed surface, touching air or a solid object causes you get a very different amount of energy transferred to you. The relevant quantity to consider is thermal conductivity, that is the energy transferred per unit time, surface and temperature difference. I added this to give more visibility to his comment; my original answer follows.

Air is a very poor conductor of heat, the reason being the fact that the molecules are less concentrated and less interacting with each other, as you conjectured (this is not very precise, but in general situations this way of thinking works). On the opposite, solids are in general better conductors: this is the reason why you should not touch anything inside the oven. Considering order of magnitudes, according to Wikipedia, air has a thermal conductivity $ \lesssim 10^{-1} \ \text{W/(m K)} $, whereas for metals is higher at least of two orders of magnitude.

I really thank Zephyr and Chemical Engineer for the insight that they brought to my original answer, that was much poorer but got an unexpected fame.

my first conjecture was: It’s the nature of the air (i.e., a gas) that its molecules are more disperse than those of a solid.

Yes, but you can go a few steps further. The sparseness of molecules has two crucial consequences:

To burn your hand, you need to transfer a high amount of heat to it in a short time. For this, you need both the heat and means to transfer it. A piece of metal is much better suited to this purpose than a volume of air due to the above reasons.

The following everyday experiences are also due to these or similar effects:

Your hand is not burned because its temperature is not at 200degC. If your hand stays there for a long time, it will be burned (i.e. the temperature will be high). So it takes time to heat up your hand. There are several factors you can consider.

Your hand is not dry but is has water. When it is heated up, the water evaporates. Evaporation takes heat and protects your hand. If your hand is wet, that is even more safe.

The effect is the same as staying in a dry sauna in which the air temperature is a 100 degrees celsius. As long as you stay put, you can stay in the sauna for a considerable time, because the air is a bad conductor of heat (putting your body onto a metal at the same temperature as in the sauna will almost immediately cause burning wounds). But as soon as you are going to move, you can't stay too long in the sauna because of the transport of heat by convection, which heats you up very quickly. Try moving your hands in the oven, and feel how fast they get hot.

You can see the same effect in very cold air surrounding you. If you experience no wind you can stay a fairly long time in the cold air (even in air of about minus 100 degrees), again due to the low heat conductance from your skin to the surrounding air. But when you walk through the cold air during a storm the windchill is gonna be such that you can't stay in the cold air too long, because of the same transport of heat by convection, which cools your skin much faster than by heat conduction alone.

After the oven has run for a few minutes, the oven and the air inside it reach the target temperature (let's assume 200°C, but can vary depending on settings). However, in order to insert your hand in the oven, you will have to open the door. When you open the door, the hot air exits quickly. Then, the air inside the oven cannot get near 200°C because air is a poor thermal conductor and takes time to heat up. Since you have the door open, the inside of the oven will be replenished with cold air as the hot air raises and leaves the oven. Of course, all of this assumes that you don't close the oven's door with your hand inside.

The air that immediately exits the oven as you open it indeed has 200°C. But cannot be in contact with your hand for more than a few moments since it raises quickly. This is way to short for the air to be able to transfer enough heat to your hand to harm you usually, but don't try this at home.

Air is not a very good conductor. Just look at your cake as an example. If air was a good conductor of heat you'll be eating black cake!

Note that this effect is not exclusive to air, but can be observed with any materials which have low thermal conductivity. For instance, here's a guy holding a glowing-yellow (around 900°C) chunk of aerogel with his bare hand, just out of the furnace: 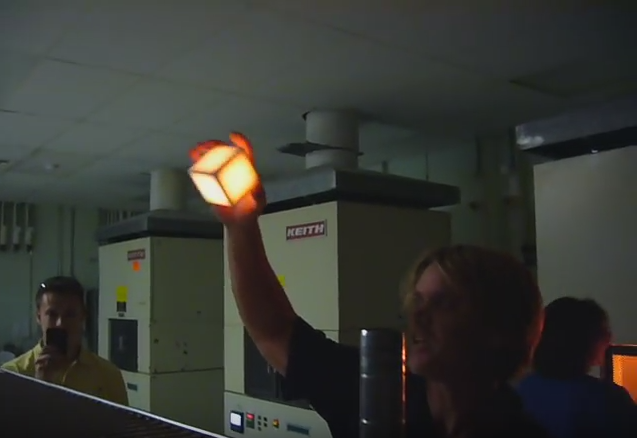 Besides all the good answers given, one thing not mentioned is that the hand is being actively cooled by, e.g., the circulation of blood (and as overclockers know, liquid-cooling is in many respects superior). As such, the hand could likely remain in the oven indefinitely, as it has the remaining mass of the human body to dump the heat into.

Just to go one step further: think about the same experiment, but now the oven is filled with water vapor at 200C rather than air.

The heat capacity and thermal conductivity of water vapor is about as bad as that of air. But you would still be severely burnt !

The difference is that water vapor would condensate on your hand, releasing its latent heat.

So hot air is not burning you because its heat capacity is small (it takes little heat to change its temperature a lot), because its thermal conductivity is small (air does not conduct well heat from the walls of the oven to your hand) and because it is not changing state at the contact of your hand.

Air is not heat conductive enough to transfer enough heat energy in a short enough time for it to register as particularly painful. Try keeping your arm in there for a little longer though and it might start to become a bit too crispy for your taste.

Not the answer you're looking for? Browse other questions tagged homework-and-exercises thermodynamics temperature or ask your own question.

130
Why can I touch aluminum foil in the oven and not get burned?
2
Do conventional ovens heat by thermal conduction or radiation?

58
Why does cold metal seem colder than cold air?
1
Balloon gas temperature experiment in water
0
Is inconsistent when a liquid evaporates, its volume changes, and pressure and temperature are constant?
5
Shouldn't turning the air conditioner off during the day save energy?
130
Why can I touch aluminum foil in the oven and not get burned?
13
Should we take the elevator instead of the stairs to save energy?
0
Will thermal radiation of hot humid outdoor air cause a person indoor to feel warmer than if it were cool or dry outside?
17
Why do fruits left to dry in the sun feel so much warmer to the touch than other objects outside?