For the recently reported production (January 2017) of metallic hydrogen in the laboratory - what is the evidence exactly?

My google news page has burst forth the news that metallic hydrogen has been produced in a laboratory using a diamond anvil cell. Only one service mentions (at this particular moment) that it has been called into question at - at least - premature. That can be read about in Nature: Physicists doubt bold report of metallic hydrogen

Here I only want to ask about the evidence. Is it only the sudden change in visual appearance change as recorded in a camera on top of the microscope, at a specific temperature and pressure? That it "looks shiny?" Or is there actually more direct data than that?

note: I am not asking if the data is sufficient or not, nor if it is convincing, or metallic or not. Just a narrowly defined question about the extent of the observations that have lead to the proposal that a metallic state was achieved.

above: potentially three states of hydrogen as viewed in a diamond anvil cell, from here.

Judging by https://arxiv.org/abs/1610.01634, the photograph from the microscope is not exactly the only evidence, they also performed reflectance measurement using a spectrometer (see their Figure S5). These two kinds of evidence are closely related, but not identical.

We have studied solid hydrogen under pressure at low temperatures. With increasing pressure we observe changes in the sample, going from transparent, to black, to a reflective metal, the latter studied at a pressure of 495 GPa. We have measured the reflectance as a function of wavelength in the visible spectrum finding values as high as 0.90 from the metallic hydrogen. We have fit the reflectance using a Drude free electron model to determine the plasma frequency of 30.1 eV at T= 5.5 K, with a corresponding electron carrier density of $6.7\times10^{23}$ particles/cm$^3$, consistent with theoretical estimates. The properties are those of a metal. Solid metallic hydrogen has been produced in the laboratory.

Edit: As requested, adding Figure 3 from the paper. 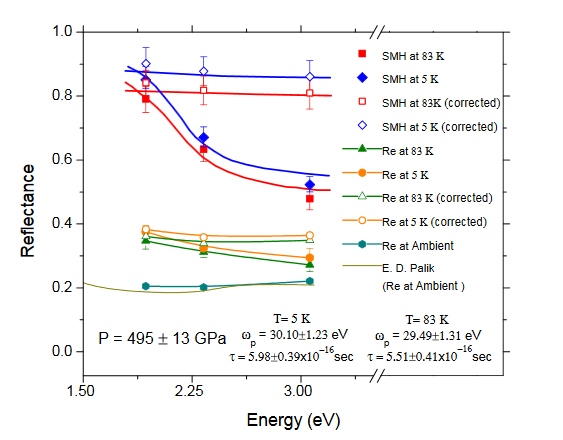 Not the answer you're looking for? Browse other questions tagged experimental-physics pressure phase-transition hydrogen metals or ask your own question.

-2
How is possible to create a pressure greater than Earth core's pressure in laboratory?
12
Are there published predictions that hydrogen could remain metallic at ambient pressure?
1
What makes solid hydrogen, or any other material, metastable?
0
Would a transition from liquid metal to solid metal hydrogen exhibit thermodynamic characteristics of freezing?