We just finished our sound waves class at my university. I was taught that reflection of sound waves from an elastic boundary is accompanied by a phase change of $\pi$ while that from a rigid boundary is not.

Let us assume that the ear membrane is an elastic boundary ( I really am unable to figure out what type of boundary it would be so please correct me if I am wrong). In that case the sound reflected would have a phase change of $\pi$.

Let us additionally assume that this wave had come from a continuous sound source $A$. This source would still be producing sound when our wave comes back after reflection.

Shouldn't our reflected wave interfere destructively with incoming sound waves from A and stop us from listening all further sounds ?

The eardrum is elastic, andon the inward movement, it transmits the pressure wave into your brain, ultimately. But it is not perfectly elastic, so even if it did reflect sound, it would not be a exact reflection of the incoming wave. So destructive effects would not occur.

In particular, the reflected wavelength would be lengthened and the conical shape of the ear canal would alter the characteristics of the sound wave that emerges from it.

A phase change of $\pi $ is not likely unless you assume the eardrum is completely rigid, which of course it is not.

The ear membrane is very light weight. That is why it moves with the air (waves). In order to produce "distructiv" waves the membrane would have to move in the exact oposite direction of the incoming sound. That would require separate source of energy, which the membrane does not have.

Any imperfection in the otherwise synchronous movement of the membrane would produce a wave of much less amplitude than the incoming sound, that it would be practically negligible.

Well, both user140606 and Alex Doe are right. Just gonna add a couple of things here.

As user140606 mentions, you would get a reflected wave with a phase difference of $\pi$ only if the eardrum would be completely rigid (this would mean that the impedance there would be infinite. Hopefully, you covered that in your class. If not, you can have a look at a textbook such as "Fundamentals of Acoustics" by Kinsler et al. In the case where you have some finite impedance (most probably complex) you will get some of the energy reflected with some specific phase relation to the incident wave and some of the energy transmitted with a (possibly different) phase relation.

Now, regarding the specifics of the ear canal and the eardrum, one can see that they form a kind of open-closed tube with the characteristic quarter-wavelength resonance being at around 3KHz-4KHz (this reflects very well on the equal loudness contours, else known as Fletcher-Munson contours). Moreover, it is quite well known nowadays to headphone manufacturers that those resonances are something very prominent. This is why the curve they are targeting for their products is not flat but has the shape of the following image. 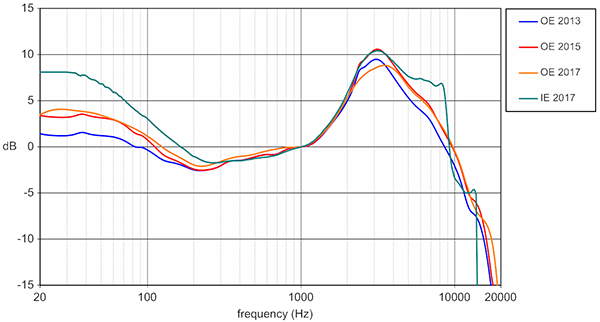 For more information on this topic, one could refer to "Listener Preferences for Different Headphone Target Response Curves" by Olive et al. and "Identification and Evaluation of Target Curves for Headphones" by Fleischmann et al.

This, in brief, shows that the eardrum does reflect part of the incident energy because otherwise, you wouldn't get a resonance! According to d'Alembert's solution to the wave equation, you get two travelling waves on opposite directions. The steady-state (modal) solutions are more clear to witness from Bernoulli's solution, but since they are solutions to the same equation, one could conceptually think of them as the same thing (we are somewhat abusing the actual mathematics here, but I hope the conceptual connection is clear), which means that two waves moving in opposite directions will create a standing wave (which is what the resonances are in tubes).

To conclude, you do get some cancellation from the reflected wave, but since the energy reflected is not equal to the incident you won't manage to achieve complete cancellation (or double the amplitude at the antinodes).

Not the answer you're looking for? Browse other questions tagged waves acoustics reflection or ask your own question.

13
Why there is a $180^{\circ}$ phase shift for a transverse wave and no phase shift for a longitudinal waves upon reflection from a rigid wall?
4
Why are electromagnetic waves inverted when reflected at a fast to slow medium boundary?
0
Shouldn't reflection at the boundary interfere with the original wave to not give any wave?
11
Why don't humans perceive sound waves as twice the frequency they are?
1
Reflection of Sound Wave and Light (Electromagnetic) Waves from a Rigid Boundary
1
Sound wave travelling from high impedance to low impedance medium, what will be the reflection & transmission coeffiecient?
1
Reflection of sound wave