I am looking at two adjacent elastic cantilever beams. They are micron/nanoscale size and so they vibrate due to thermal noise. The problem I am trying to solve is whether the vibrations are enough for the tips of the cantilevers to touch or not.

The beams are the same identical height $H$, separated by distance $a$, and have identical Youngs modulus $E$, area moment of inertia $I$, and mass-per-length density of $\mu$. The deflection of the tip of each cantilever is $\delta_1(t)$ and $\delta_2(t)$. 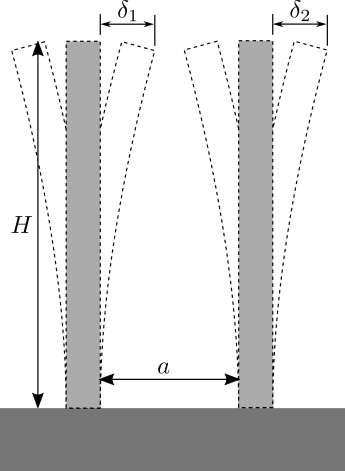 According to the Equipartition Theorem, the vibrations due to thermal noise will be such that

where $k_B$ is the Boltzmann constant, $T$ is the absolute temperature, $K$ is the spring constant of the elastic cantilever $K=3EI/H^3$, and $\sigma^2$ is the mean square deflection of the cantilever caused by thermal vibrations.

Solving for the standard deviation of the displacement $\sigma$ we get:

From this it's trivial to solve for the when the average deflection of the tip is equal to half the gap width $a/2$. However $\sigma$ is just the standard deviation of the deflection, at any point in time the amplitude of the vibration may be much larger or smaller.

Assumption: the probability of the amplitude of the deflection of either cantilever being $z$ follows a Gaussian distribution:

That means that at any time the amplitude of the deflection could be any value from $-\infty$ to $+\infty$ (though physically it's of course impossible for it to be greater than the total length of the cantilever $H$) but since $\sigma \ll H$ it should be a close enough of an approximation.

So now we have two vibrating cantilevers, the amplitude of each being random but having a known probability distribution. For simplicity we'll ignore all the vibrational modes except the first one.

Assumption: the two vibrating cantilevers are not necessarily in phase, with each one having a random phase angle. The phase angle of each cantilever has a uniform probability distribution:

where $\omega$ is the vibrating frequency, $t$ is time, and $\theta$ the phase angle difference between the two cantilevers. The frequency $\omega$ is assumed to be the 1st natural frequency which is

The tips of the two vibrating cantilevers will touch if at any time the following condition is met:

So the touching condition becomes

For the sinusoidal term, we don't really care where it specifically is in the phase angle, all we care is whether or not the inequality is true at any time. So we can simply take the limits of that term, which is $\pm z_3$. Since we want the LHS to be less than zero and $a$ is always positive, we can simplify the inequality to this:

Edit: I cross-posted the final mathematical question at math.stackexchange here.

Although I am not convinced that probability of $(z_2\cos\theta-z_1)^2+(z_2\sin\theta)^2-a^2\geq 0$ gives you the probability you are seeking, I shall show how to calculate it.

Not the answer you're looking for? Browse other questions tagged homework-and-exercises statistical-mechanics probability elasticity vibrations or ask your own question.

0
Young's Modulus and Vibrating String Harmonics
2
How do centripetal forces and gravity work for objects in a rotating cylinder?
5
Degenerate vibrating modes of a metal plate
1
A moving brush on a vibrating surface
2
Vibrating Objects
0
Vibrating Objects Part 2
2
Is Everything Vibrating?
3
Finding the vector potential of a spinning spherical shell with uniform surface charge?
3
Normalized probability distribution from the Coulomb/Rutherford scattering amplitude?