Far away from a charged conductor, the field is like a point charge. Where's the point located?

In the framework of classical electrodynamics, at distances much greater than a conductor's dimension, the field ought to approach that of a point charge located at the conductor. But where at?

For a highly symmetric conductor, we ought to be able to deduce some information about the "point charge" location. Yet, consider an arbitrarily shaped conductive body. Is the point located at the centroid?

Edit: I am not questioning why we approximate a source as a point charge at far distances. This question regards geometrical convergence in a physical scenario. If the field lines converge to that of a point charge, they emanate from a point. Are there known relations between the point and the body itself?

The answer is that it doesn't matter.

The distance at which fields resemble that from a point charge is also the distance at which it does not matter where that point is located within the structure. The change of field due to switching the origin within the conductor will be comparable to the corrections to the point charge approximation, both arising from same order multipole terms.

Based on some of the back-and-forth I see, I think you're asking the wrong question. I think the question you want to ask is "Given a charge distribution $\rho(\mathbf{r})$, where should I place a point source so that the exact potential $\phi(\mathbf{r}) = \int \rho(\mathbf{r}')/|\mathbf{r}-\mathbf{r}'| dv'$ is most closely approximated by the potential from the point source?"

If the charge distribution is uniform, then the answer is at the centroid. The reason this is the right point is it makes the dipole moment of the difference between exact and approximate solutions go to zero. So the error in the potential is $\mathcal{O}(1/r^3)$, whereas with any other choice the error would include the dipole term, and therefore be $\mathcal{O}(1/r^2)$. (Properly setting the magnitude of the point charge accounts for the monopole term of $\mathcal{O}(1/r)$.)

and can be thought of a as a "center-of-charge" similar to a center-of-mass.

The multipole expansion is a useful approximation to low order (mono-, di, - quadrupole) if the diameter of the charge distribution $d$ is much smaller than the distance at which you observe the field or potential $r$.

That observation distance is with respect to an origin, which you conveniently place somewhere inside the charge distribution. Emphasis on somewhere, because wiggling with the origin at most a distance $d$ won't change much $$ |r|^{-1} \approx |r+d|^{-1} \text{for $d\ll r$}$$ You may place the orgin, aka the source of the monopole field, anywhere inside$^1$ the charge distribution. It is not a point dictated by the theory. One would normally choose it in such a way to make higher moments vanish.

One can always make the dipole moment vanish by placing the origin at the center of charge.

$^1$ You may place it outside the (convex cone around) the charges, but then you will never get higher moments to vanish.
Share
Improve this answer
answered Jan 26, 2017 at 8:17

I'd like to add another example and clarify one of my statements in the comments I made to the OP's question.

If you have a square sheet of metal of side 1cm. You can consider the point to be anywhere near the metal if you are a mile away. The point is NOT the centroid. The centroid is a purely geometric quantity. The charge density can vary over the geometry. You usually get the location of the point when you apply the approximations to the exact formula. 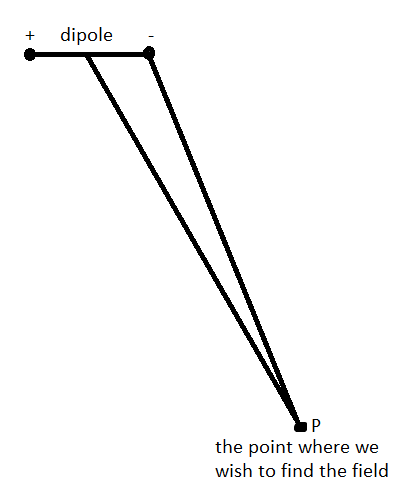 The change of the location of point charge does not cause any significant change in the answer.

You can assume that the point charge is at the midpoint of the dipole, or it is at the positive charge or it is at the negative charge. Any point you choose, your answer will yield pretty much the same number. Manier times, the uncertainty in our measuring instruments is much bigger that we cannot notice the difference by changing the location of the point. Of course, you cannot go way to off with your approximation.

Not the answer you're looking for? Browse other questions tagged electrostatics charge approximations multipole-expansion or ask your own question.

5
Can an ungrounded conductive cavity provide electrostatic shielding?
0
Electrostatic Shielding
1
Electric field in conductor at equilibrium: explanations seem to be lacking
1
Electrostatic polarization of an axially symmetric conductor
3
Field induced outside a grounded 2D circle conductor by an exterior point charge. A puzzle, not what you think!
0
electric field and distribution of induced charge on outer surface of conducting shell enclosing an off-center charge
0
Conductor as an Equipotential; Mathematically
1
Why does the charge reside only at the surface of a charged conductor?
1
Contribution of inner induced charges to the electric field outisde