Spherical charge enclosed by a shell - why doesn't induced charge on shell cause a greater electric field?

Suppose you have a spherical conductor with charge $+Q$ and radius $R$. You have a conducting shell at radius $2R$ with net charge $-Q$. From what I understand, the shell will have a charge of $-Q$ on the inside surface of the shell, and the outer surface would then have a charge of 0.

Specifically looking at the field between the region $R < r < 2R$, my intuition leads me to think that the negative charge $-Q$ on the inner surface of the shell will contribute to the electric field, as the electric field caused by the spherical conductor will be radially outward, and the negative charges coated on the inner surface will also contribute a field that's radially outward towards shell surface. This intuition leads me to thinking that electric field at any point $R < r < 2R$ should be greater when a shell encloses a spherical conductor compared to no shell at all. But Gauss' Law says that because the $Q_{enclosed}$ is the same both with and without the shell, the flux is the same, and because surface area is the same (and can remove integral and dot product because of its radial symmetry), it should have the same net electric field. This doesn't quite make sense to me.

My physics instructor thought that maybe it was because the charges on the shell are induced to conform to Gauss' Law, and that if the spherical shell existed without inducing the opposite charge on the surface, that net electric field would be different. But I'm not quite clear on this. Is there another explanation for this idea?

Here is a way of looking at what happens.

You now enclose the conducting sphere with a larger radius conducting shell with charge $-Q$.

When the conducting shell was far away from the sphere the charge $-Q$ resided on the outside of it. 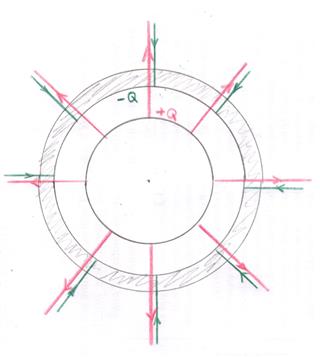 The electric field inside inner surface of the shell does not change.

Specifically looking at the field between the region R < r < 2R, my intuition leads me to think that the negative charge -Q on the inner surface of the shell will contribute to the electric field...

The charge $q$ distributed on sphere (in this case the charge is $-Q$ and it is distributed on the inner surface of the larger spherical conductor) does not produce any electric field inside the sphere!

Consider a point inside the sphere somewhere close to the surface. There is a part of charged surface which is very close to our point, so it must produce some electric field in the point. But this intuition is not correct. This "nearby" portion does produce electric field in our point, but so does the rest of the sphere and the total is zero. It's possible to prove this rigorously, but some mathematics would be required.

Here is another way to understand why the field is zero inside the hollow sphere.

First take a conductor sphere, charge it. All the charge would go to the surface, electrical field inside is zero because this is a conductor. Now fix all the charges in place. Electric field would not change, because charge distribution did not change. Now start to remove the matter from inside the sphere. You did not move any charges, so the electric field would not change. And now you have a charged hollow sphere, charges distribution is the same as in conductor sphere, so the electric field is the same: zero.