Confirmation of Direction of Electric Field

After having just learned about electric fields I am trying to write down an equation for the net electric field at a point. Though aware of Gauss's law, I want to try to solve this problem with what I already know.

My first intuition was to use the equation of projection (which, incidentally, I just learned in Calc III yesterday). Then, I would write down the new force vector $\vec{F_t}$ as projected onto the unit vector for the x axis.

This equation for field relative to a point charge is really powerful. Choosing a point $r_2$, I can integrate $\vec{E}$ over a bounded region of $Q$ to find the net field at $r_2$.

What I am looking for

Very simple. I'm hoping someone can verify my derivation for the field equation ($\vec{E}$) is correct. We didn't discuss this is in class. Purely for my own enjoyment.

After thinking about it a bit I realized what I had been doing was wrong. The solution is a great triviality.

First, the electric field equation is along $\hat{r}$ which is a radial vector to any other point $\vec{r}^\prime$

Substituting this into the equation for $\vec{E}$:

Then, integrating over the surface on which $\lambda (\vec{x})$ is defined:

For example, this image shows the electric field induced on a point $\vec{r_p} = 4\hat{i} + 2\hat{j}$. Summing these vectors for some infinite or finite region yields the net field at $\vec{r_p}$. If the integral doesn't converge...then I don't know what that would mean physically. 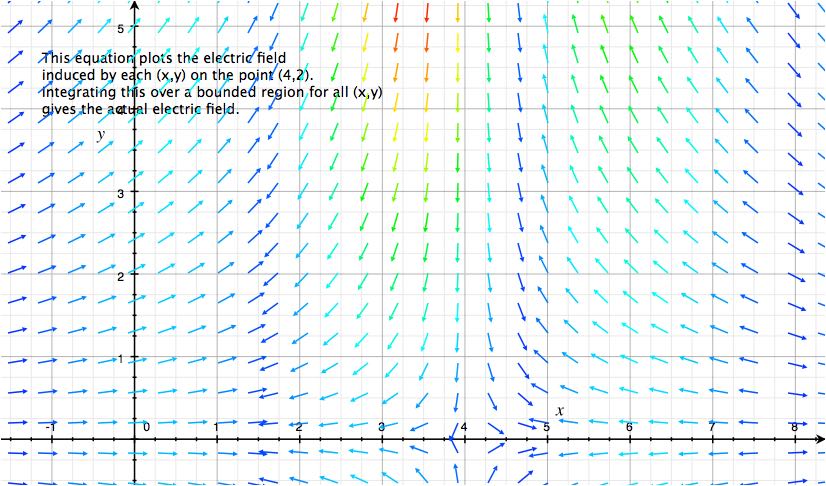