Why did the author choose this as the electric field?

In the image below, the author works out an example. However, I don't understand how he arrived at $\vec{E}$. In the problem, it says that the charge is uniformly distributed, but somehow he says that the distance from the source point to field point everywhere on the northern hemisphere is at a distance $R$ away. My guess might be that he is using this concept (correct me if I say it wrong): when you have a solid sphere that is uniformly charged, you can pretend that the entirety of the charge is located at its center. Then, you can treat this as a discrete charge which allows you to use a fixed distance to any field point.

Could someone help me understand this?

For clarification: I'm not asking about the final solution, I'm only asking about one step in his solution. I don't care about the net force - I only want to know how he arrived at $\vec{E}$. 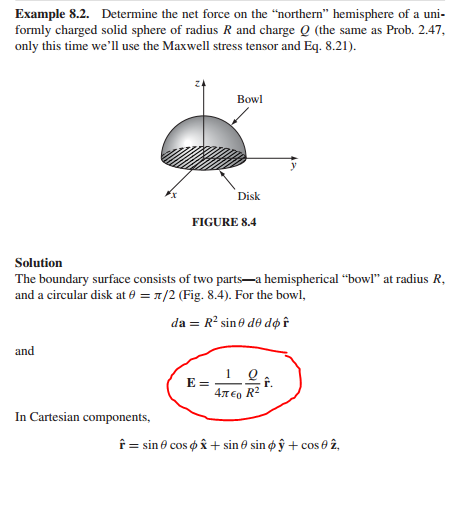 My guess might be that he is using this concept (correct me if I say it wrong): when you have a solid sphere that is uniformly charged, you can pretend that the entirety of the charge is located at its center.

No, that's not the concept. The concept is that physical laws are isotropic: any asymmetry in the result of a configuration must result from asymmetry of that configuration. Since the charge is spherically symmetric, the electric field must be spherically symmetric. If there were any point on the surface of the sphere that has a larger electric field than another point, then those points would be somehow distinguished, but there is nothing in the problem statement that allows these points to be distinguished. Thus, each point on the surface must have the same magnitude of electric field. We can calculate this magnitude by treating the sphere as being a Gaussian surface.

To respond to a previous comment asking where the southern hemisphere is: the graphic in Griffiths is misleading. Note that the problem states to find the net force on the northern hemisphere of a charged solid sphere.

Not the answer you're looking for? Browse other questions tagged homework-and-exercises electrostatics electric-fields charge or ask your own question.