I have the following problem: Suppose a harmonic oscillator with constant (in measure) friction, which is of course opposite to the velocity. We ultimately want to know how the amplitude decreases and where the body stops.

So what do we do after this?How do we know how its amplitude changes?How do we see if (and where/when) the body stops moving? Also is there a nicer (more rigorous??) way of approching the problem as far as the differential equations are concerned? Thanks in advance :)

The system is the mass $m$ and on it there are two external force, the force due to the spring of spring constant $k$ and the frictional force opposing motion $T$.

Assume that the system and the initial conditions are defined as shown below.
At $t=0\, \; x=A+\frac T k$ the initial extension of the spring and the velocity $v$ of the mass is zero. 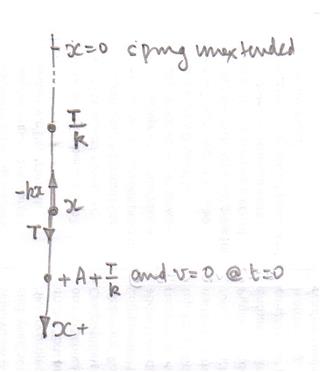 A little later in time the displacement of the mass is $x$ so the force on the mass due to the spring is in the negative x-direction and the force $T$ is in the positive x-direction opposing the upward (negative x) motion.
Hopefully the reason for drawing the x-axis down and other annotations will become apparent later.

When travelling back to the origin the equation of motion is $mx'' =-kx + T$.
This would cause a change of sign to the solution for $x$ given by the OP.

What worried me was the step function nature of the solution but that can be explained as follows.

As drawn this is a diagram of the motion for half a period of a spring-mass system in a constant gravitation field with $T=mg$.

When one solves that sort of problem it reduces down to simple harmonic motion about the equilibrium position of the spring-mass system $x_{\rm o}= = \frac{mg}{k}$ where $x_{\rm o}$ is the static extension ie the displacement of one end when it was unextended.

So the current example the motion will be undamped simple harmonic about a position $x = +\frac T k$.

What happens next depends on the relative values of $\frac T k$ and $A$ as shown in the diagram below. 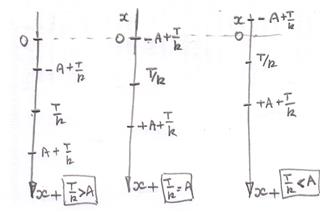 If the spring is compressed and the force due to the spring is greater than the frictional force the motion will continue when the mass stops for the first time and a similar analysis can be made with the direction of force $T$ reversed.

Not the answer you're looking for? Browse other questions tagged homework-and-exercises newtonian-mechanics friction harmonic-oscillator differential-equations or ask your own question.

0
Solutions of damped oscillator differential equation
3
Period $T$ of oscillation with cubic force function
1
Q factor of driven oscillator
1
Different frictional forces- damped harmonic motion
0
Meaning of complex oscillation equation
1
The amplitude of a damped spring with a weight during the 4 first oscillations
0
Amplitude of Oscillation Without Solving Differential Equation
3
What is the difference between solutions to 2nd order homogeneous ODE?