Why does red light bend less than violet? “BUT” , sound diffracts more than light

We can hear the sound that coming from the other room, but we can't see the light coming as well.

And in this case, sound diffracts more than light because of a wavelength of sound is bigger than light.

Now we can say that in general, waves with lower wavelength can curve around a corner less than a wave with high wavelength like sound.

So when a beam of light passes through a glass, the Violet (a lower wavelength ) diffracts more than the Red color ( a large wavelength)

And here I couldn't understand it because the two concepts should be the same and in real they're not. 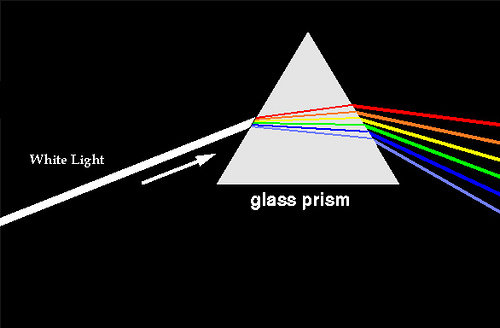 You are confusing diffraction and refraction. These are different things.

In the case of light through a prism it's refraction because the prism material has a refractive index dependent on the wavelength of the light.

Sound going around corners or through doorways is diffraction. The wave spreads out but there's no change in the properties of the medium (air).

In the example of a prism splitting light into various paths for different wavelengths, the phenomenon is a combination of refraction and dispersion.

Refraction refers to the bending of the path of a light ray due to a change in the speed change from one medium to another. But this by itself is not enough to split light into colors. There is also dispersion, which is the effect that different wavelengths have differing speeds, and shorter wavelengths slow down more than longer ones in most materials, especially glasses.

Consider sound with a speed in air of about 345 m/s. A 100 Hz bass note will have a wavelength of 3.45 m, about the size of a small car, and much larger than the window openings. So bass notes from a subwoofer easily bend around common objects. On the other hand, a 600 Hz trumpet or 1000 Hz guitar riff will have a wavelength of less than a meter, and is easily shadowed by objects.

Not the answer you're looking for? Browse other questions tagged visible-light diffraction wavelength or ask your own question.

1
Why does violet light bend the most?

7
Why can't light pass through walls but sound can?
32
Why does light of high frequency appear violet?
4
Did diffraction bend this light more than 90 degrees?
9
Why does the additive color model use red, green and blue instead of yellow, green and violet?
1
Order of coloured bands of light: red, blue, green, orange, red, violet, green, and violet
4
Why is wavelength of violet colour less than wavelength of blue colour?