Why the exhaust pressure should be equal to ambient pressure?

I've came across various sources on rocket operation basics (e.g. this one), and they all pretty much give the same equation for thrust that looks something like this: $ F = \dot{m}v_e + (p_e - p_a)A $, where $\dot{m}$ is the mass flow rate, $v_e$ is the exhaust gases velocity, $p_e$ and $p_a$ are the exhaust and ambient pressures respectively, and $A$ is the nozzle area.

Then all of those sources agree that in order to maximize the thrust efficiency (exhaust velocity etc.) we should equalize $p_e$ and $p_a$, so that the second term would vanish. My question is: why?

From the naive point of view the thrust would be maximized whenever both of the terms are maximized - i.e. when the $p_e$ is actually as big as possible rather than equal to $p_a$, so that the second term would return a positive increment in the expression, not a zero.

So what am I missing here?

So what am I missing here?

You are implicitly assuming that effective exhaust velocity $v_e$ is constant. This is not the case. What you are missing is that $v_e$ in a conventional nozzle (a de Laval nozzle) tends to increase as exit pressure decreases. An underexpanded nozzle (one in which $p_e > p_a$) will have a significantly reduced exhaust velocity compared to a perfectly expanded nozzle. The slight gain in thrust due to the positive $(p_e-p_a)A$ term does not offset the significant loss in thrust due to the suboptimal value of the $\dot m v_e$ term.

Anyways, as you mentioned above, the thrust for a conventional rocket is given as,

Now, we want to look at how each parameter above is dependent on the properties of the rocket thrust chamber and nozzle configuration. Rewriting the mass flow rate ($\dot{m}$) using the mass flow parameter for a nozzle with the choked condition at the nozzle throat we have,

where $p_1$ is the chamber pressure, $T_1$ is the chamber temperature, $A_t$ is the throat area, $R$ is the specific gas constant for the burned products in the thrust chamber, and $\gamma$ is the ratio of specific heats of the burned products in the thrust chamber. Notice, this parameter has no dependence as to what is taking place at the nozzle exit, or the nozzle exit area for that matter. This is simply a result of the mass flow parameter being applied to the throat choking condition, which alleviates the dependency at the nozzle exit plane. Thus, our first parameter of the first term is not influenced by the nozzle exit condition.

Now for the velocity at the nozzle exit plane ($v_e$) we have, 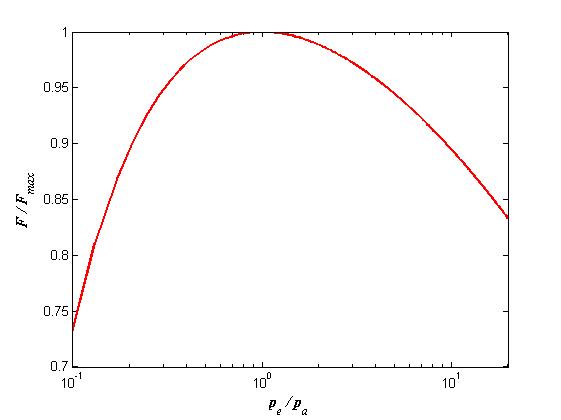 Consider it this way. Expanding the fluid to a pressure above ambient is equivalent to removing a portion of some length from the correct nozzle. The amount of potential energy the fluid possesses after the turbine stage is not entirely converted to kinetic energy if the nozzle is too short. Thus, not attaining the exhaust velocity it will attain if the nozzle was of correct length. The effect of exhaust velocity on thrust is greater than the pressure thrust.