In a spring obeying Hooke's law, load and extension are proportional anyway, so whether you consider the elastic potential energy to be tha area under the F-x graph or the x-F graph, it doesn't matter, and this can be easily proved mathematically and intuitively (I mean, physics-wise).

However, in rubber (i.e. polymers), it matters, which area you choose. So on what basis do we decide that the elastic potential energy is $\int F dx$ and not $\int x dF$? Is it specifically because $\frac {dF}{dx}$ is the "spring constant" and then the value for the elastic potential energy is just a convention which could have easily been the opposite way round if Hooke's law was $x=kF$? Or is there a reason related to the kinetic energy produced after a polymer is released? Thanks.

So on what basis do we decide that the elastic potential energy is $\int F\, dx$ and not $\int x\,dF$

$\int F\, dx$ is essentially the definition of work done on the polymer. You have to remember that the independent variable is $x$ and the load $F$ depends on $x$. It would not make sense for the integral to be the other way round.

In a comment below my answer the OP has made a very important point about whether it is the force or the extension that is the dependent or independent variable. I know we are not dealing with springs in this question but lets just consider them for a moment: 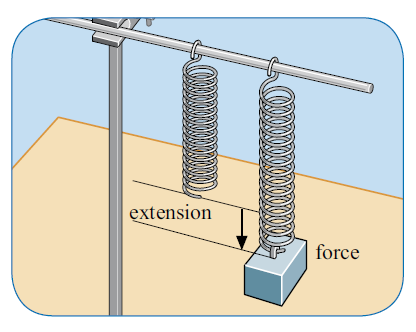 This is a departure from the convention because the gradient of the straight section of this graph turns out to be an important quantity known as the force constant $k$ and for a spring this is sometimes called the "spring constant".

So basically you were right to say what you mentioned in the comment. But I stand by what I said originally the integral really wouldn't make any sense the other way round. For a variable force it would be very difficult to integrate $\int x\,dF$ over infinitesimal $dF$. So we must have $\int F\,dx$ as extension $x$ is much easier to integrate over.

The definition of work done is $\int F\,dx$. 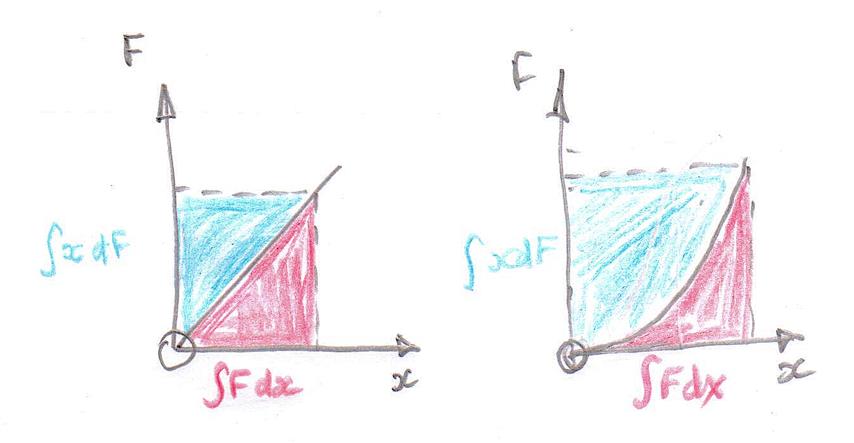 It just so happens that if force is proportional to extension, ie a graph of force against extension is a straight line through the origin, then $\int x \,dF$ will yield the same result as $\int F\,dx$.

Update as a result of some comments made by the OP.

Because work done is defined simply in words as the force times the distance moved in the direction of the force. So for a force that changes with position one takes the value of the force at a given position and then considers how much work is done by moving the force by a very small amount.
The force at the new position will be different and so one now repeats the process.
The result is that you need to do a summation or in the limit of infinitesimal steps, an integration $\int F\,dx$.

This is not the same noting that the position changes so choosing a position and multiplying that position by a change in the force $\int x\,dF$.
As I have noted it just so happens that for a particular situation the two integrals give the same result.
That is not so for your rubber.

The definition of work is useful to us because it ties in with energy conservation.
Of what use is $\int x\,dF$?

Not the answer you're looking for? Browse other questions tagged newtonian-mechanics potential-energy or ask your own question.

1
What is physics of a normal jump?
4
Bowling ball on a rubber sheet
0
Hooke's law vs. elastic potential energy
1
Gravitational PE lost v Elastic PE gained in mass - spring
2
Deriving the formula for energy stored in a spring without using geometry (determining the area under a curve)?
1
Is this an appropriate explanation of why exactly elastic potential energy is quadratic?
2
Calculating Elastic Potential Energy of a Stretched Sheet