How is a shock wave a wave?

It's explained in the case of an aircraft travelling at supersonic speed with an image that is similar to this:

Now from what I've understood, each circle represents the crest of a longitudal wave. Now I understand that anyone standing in the 'cone' will simply receive the circle crests and undergo the Doppler effect. But what I don't understand is how the two lines (or the cone if you want to go 3-dimensional) are a wave. It is explained as there being constructive interference of the blue waves there, but I don't see any point on the shock wave lines where the circle crests overlap? What kind of wave is this shock wave, longitudal? Does it propagate, in which direction? I am failing to understand what a shock wave 'looks like.'

It is explained as there being constructive interference of the blue waves there, but I don't see any point on the shock wave lines where the circle crests overlap?

I put a nice picture of a condensation cone in the following answer https://physics.stackexchange.com/a/281767/59023 (and below) that may help illustrate what that cone represents. The cone is the leading edge of a shock wave and it is not oscillatory like the more standard sine wave one may be used to. 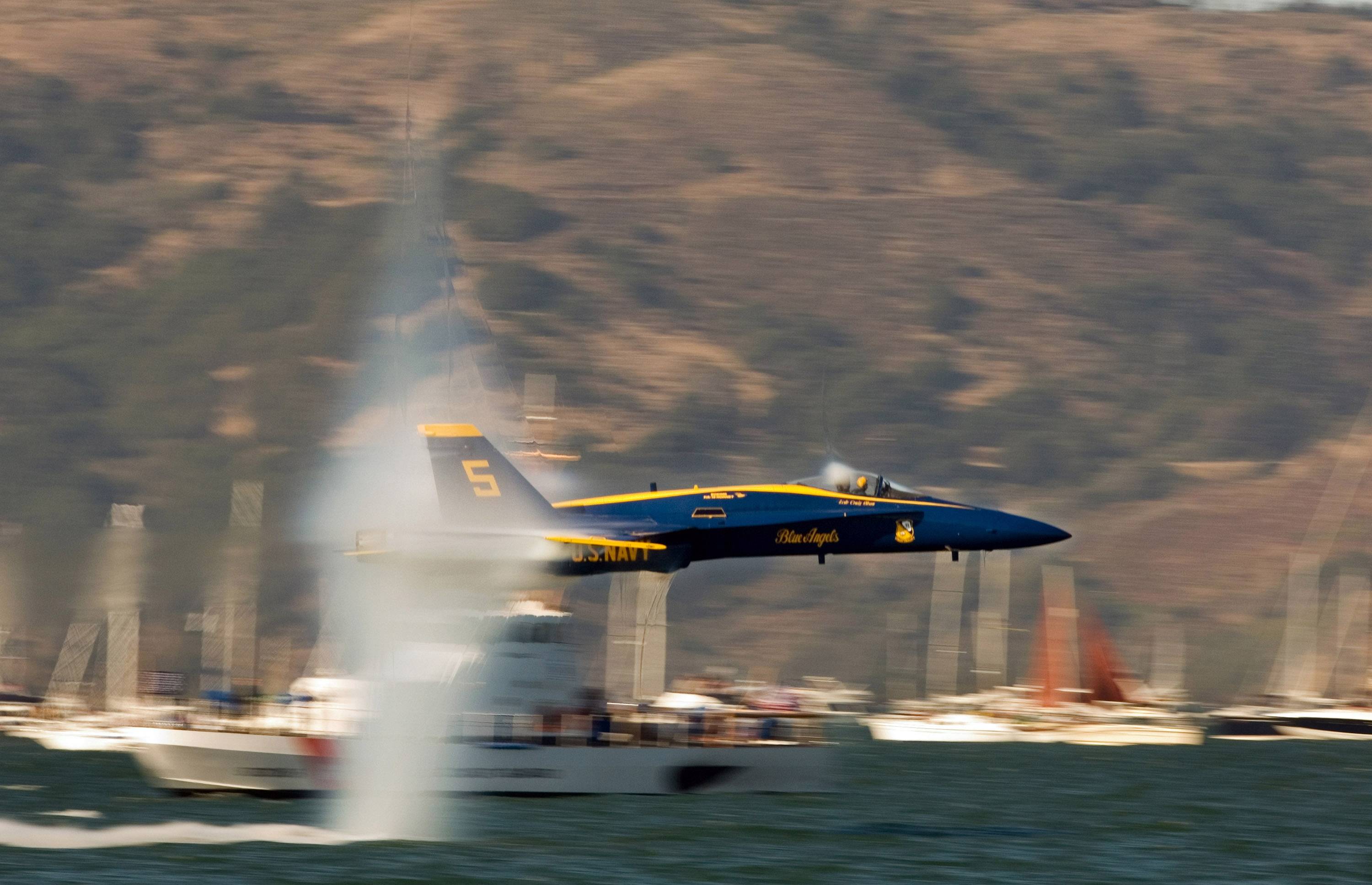 I threw togther a nice little animation of nonlinear wave steepening at https://physics.stackexchange.com/a/139436/59023 (and below). You can see that the gradient scale length of the leading edge of the soliton slowly decreases (i.e., it becomes more like a sharp ledge than a smooth sloping hill). If the steepening continues to the gradient catastrophe and does not stop, the wave will break (e.g., like water waves in high winds or near shore). If the steepening is balanced by some form of energy dissipation, a stable discontinuity can form, not a periodic wave. This is a shock wave.

The condensation cone only arises during the initial forming of the shock wave, when the pressure immediately behind the leading edge of the steepening sound wave drops due to rarefaction. Once the shock forms and is stable, the density, pressure, and temperature downstream (i.e., behind the shock) are higher and remain high. Obviously, these parameters slowly equilibriate with the surrounding medium far enough away from the shock, but in the immediate vicinity, the shock resembles a step function.

The circles in that image are really just meant to be a visualization tool. In some contexts, one may use circles to illustrate sound waves (or other types of waves) being emitted by a moving source (e.g., some Doppler effect illustrations use this).

What kind of wave is this shock wave, longitudal?

Yes, a shock wave is a longitudinal wave, specifically a nonlinearly steepened sound wave that has reached a balance between steepening and energy dissipation. The resulting phenomena has one "crest," to use your term, and no oscillations. It is a discontinuous transition between the upstream(unshocked) and downstream(shocked) regions.

Does it propagate, in which direction?

Yes, shock waves propagate. In your picture example, the shock would propagate parallel to arrows (i.e., orthogonal to the cone). A sonic boom associated with shock waves in Earth's atmosphere is the pressure pulse of the shock itself.

I am failing to understand what a shock wave 'looks like.'

Look at the link I shared above for the condesation cone or go to Google and type in "shock wave" then click on images. There have been thousands of images produced that visualize the density/pressure perturbation that is a shock wave.

Not the answer you're looking for? Browse other questions tagged acoustics shock-waves or ask your own question.

11
What Exactly is a Shock Wave?
6
Non-linear waves and shock formation
4
Sonic Boom in Aircraft and Spacecraft
4
Nonlinear waves equations derivation from Navier-Stokes
2
Density gradient in a shock wave of Supersonic Aircraft?
2
What causes the expansion and implosion of the medium before an explosion?
2
Do coronal mass ejections dissipate or decay over time?
0
Hydrodynamics shock wave Riemann problem
1
What's the difference between shock waves and acoustic waves?
1
Vapour clouds and the speed of sound
See more linked questions

8
In terms of the Doppler effect, what happens when the source is moving faster than the wave?
3
The Doppler effect in a medium like air (sound) versus the electromagnetic Doppler effect
1
Questions related to resonance/standing-waves and sound
2
If there are two different standing waves of different lengths in an open air column, what frequency would resonate?
1
Can Doppler Shift be used to calculate speed of an observed object?
0
What is the relationship between the velocity of a wave source and the amplitude of a shock wave?
3
Physical reasoning behind hearing a single shock
2
How to calculate acoustic impedance of a megaphone?
0
Can a sonic boom be a standing wave?
1
Why does the transverse Alfven mode not undergo wave steepening and hence resulting in shock waves?